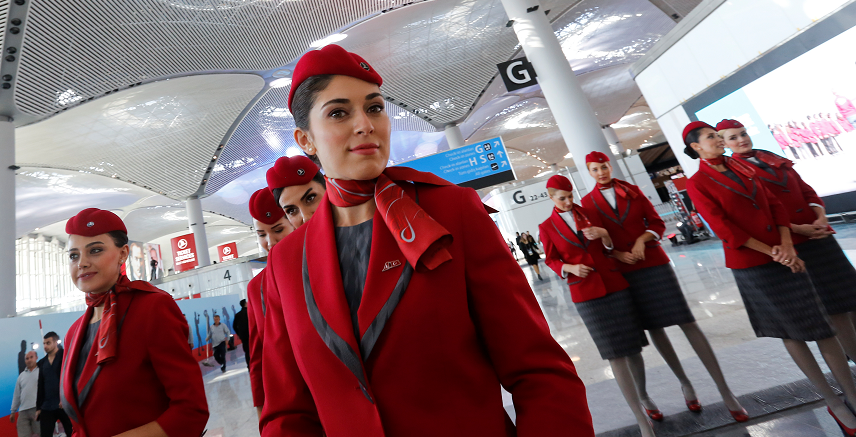 Share on:
The “capital of the world“ now has a new airport.

It is certain that the city has long functioned as a transportation hub between Asia, Europe, and Africa.

The inauguration of Istanbul’s new airport on 29 October 2018 has given it an edge over any other city for fulfilling this role.

But its role as a global aviation hub is merely a bonus; the city’s new airport will primarily function as a gateway to the great city, which is visited by 7-11 million tourists each year.

And on the 95th anniversary of the proclamation of the republic, President Erdogan opened yet another airport.

Anyone who has been in Ataturk Airport in recent months will attest to the fact that the airport can hardly keep up with the influx and outflow of passengers, which results in long queues in front of security checks, passport control units, and check-in counters as well as heavy air traffic. According to some statistics, the airport handled over 63 million passengers in 2017.

Sabiha Gokcen Airport was opened in 2001 on the Asian side of the city, and underwent an expansion program in 2009 to shoulder some of the burden of Istanbul’s air traffic. However, the airport is currently serving approximately 30 million passengers per year, which is well above its nominal capacity of 25 million.

Meanwhile, global and regional demand for air travel is on the rise. Having realized this in advance, Turkish aviation authorities were taking steps for the construction of a new airport as early as 2013, with construction work beginning in May 2015.

Designed by the UK-based Grimshaw Architects and the Nordic Office of Architecture using a combination of Islamic and Turkish motifs with postmodern architecture, the airport has been built by a consortium of five Turkish companies who won the tender back in 2013. The entire project costed around USD12 billion, which is not an unreasonable price for what is expected to become the world’s largest airport.

In its present incarnation, the airport has two separate runways, eight taxiways, and an air traffic control as well as nearly 90 aircraft boarding bridges, allowing for an annual passenger capacity of 90 million. However, upon the completion of its final expansion program sometime around 2030, Istanbul Airport will have six runways, 16 taxiways, over 160 boarding bridges, and four terminals, which make it capable of handling a mind-blowing total of 150-200 million passengers per year.

Although the airport was formally opened on 29 October and some Turkish Airlines’ flights are arriving at or departing from the new airport, it is going through a trial period starting on 1 November that will last until all the equipment from Ataturk Airport is relocated to the new airport at the end of December, when the new airport will replace the old one in the true sense of the word.

The new Istanbul Airport will be regarded as the main international airport of the great city, and if you are heading for Istanbul in 2019, there is a good chance that you are going to arrive at it. Meanwhile, construction work is still in progress to connect the airport, which lies in the north of the European side on the coast of the Black Sea, to Istanbul’s metro and bus networks, so as to facilitate the passenger’s access to the city’s urban and business centers.