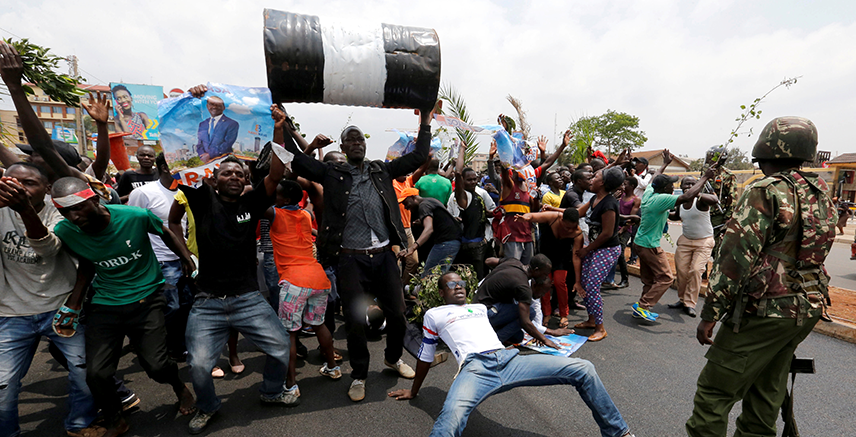 Economy in distress as election annulled

Share on:
Following the annulment of Uhuru Kenyatta's election win by the Kenyan Supreme Court, what's next for the country?

Nearly one month on from the Presidential elections, Kenyan citizens were probably expecting life to have returned to normal by now. However, last Friday, the Kenyan Supreme Court annulled the win of Uhuru Kenyatta over Raila Odinga, throwing the country once more into political uncertainty.

The decision came just a few weeks after Kenyatta was sworn in with a margin of 1.4 million votes, and many external observers praised the elections as the country’s fairest and most fraud-free yet.

The first such annulment in Africa’s history, this shock ruling made ripples not just in Kenya, where electoral irregularities are nothing new, but on the continent more widely.

The Kenyan Supreme Court, and particularly its head, Honorable Chief Justice David Maraga, have shot to fame as a result. For several years the Supreme Court had been fighting for more autonomy, something Maraga himself described in a statement in December 2016 as the “hard-won independence of the judiciary.”

Maraga has since been lauded as the “brave man” of Kenya’s law courts, an appropriate epithet, considering the spate of mysterious misfortunes befalling other prominent figures during this year’s election period.

On television and Twitter, Uhuru Kenyatta cultivated a rhetoric of dignified acceptance in response to the ruling. However, over the weekend he took to the streets to accuse the Supreme Court of deliberately upending the decision of the people.

Not surprisingly, Raila Odinga was thrilled with the Supreme Court’s annulment. He may also have been a little surprised.

In a case of history not repeating itself, he petitioned the court in 2013, after the previous Presidential elections, claiming similar electoral fraud, but was unsuccessful. He may be wondering what is different about his challenge this time.

Indeed, until full judgement on the case is passed in three weeks, his guess is as good as ours. There are a few theories circulating to explain why the Supreme Court cracked down this time.

Before the elections, KPMG audited the voters’ roll and discovered over a million dead Kenyans were registered to vote. Then, during the elections, the expensive digital system installed this year to improve transparency when collecting the votes mysteriously failed. Vote counters were meant to sign witness statements (34As), and upload them online immediately via this system for public view, but of course they could not.

Instead, many 34As were handed in several hours later. Walter Mebane, professor from the University of Michigan analyzed the data from the vote, and undertook forensic analysis of the paper forms. He reported statistical impossibilities about the data, and a whole range of concerning abnormalities emerged from analysis of the 34As: missing stamps, watermarks, and serial numbers, as well as handwriting that was the same across multiple forms and forms that arrived from fictional polling stations.

Odinga’s party, the National Super Alliance Party (NASA), also claimed that its electronic system had been hacked into, and vote tallies tampered with online. It suggested that the passwords had been stolen from an IT manager who had been found dead in suspicious circumstances in the run-up to the elections.

These faults are somewhat disappointing considering the special attention given to the election process at an international level. The US and other key donors had invested USD24 million in digitizing the vote counting systems, and observers from the European Union, the African Union, and the Carter Center, a North American NGO headed up by John Kerry, all played an instrumental role in preparing the country for elections.

According to the Supreme Court’s ruling, a re-election is due to take place in 60 days. This in itself has caused controversy. Odinga maintains that 60 days is by no means enough time to correct the flaws in the electoral system. He is pushing for the dismissal of several key members of the Independent Electoral and Boundaries Commission (IEBC), but it would be impossible to replace them in the allotted time. He has claimed that without these amendments to the procedure there is no point to a re-election, and if the Court does not guarantee this, he will not participate.

What does the ruling mean for Kenya? Optimists argue that for the democratic future of the country this is a milestone moment, confirming that judiciaries are able to distance themselves from and even oppose political power.

However, while it may be a first in Africa’s history, the annulment somewhat undermines the theory that Kenya was on its way to achieving transparent and legally-binding voting practices. The episode casts doubt on both foreseeable possibility of clean voting in Kenya, and also on the credibility of those “democratically-advanced” western parties who were financially spearheading it.

In fact, the whole affair has led to serious speculation about the interests of these groups in the election’s outcome.

The ruling will also have a negative impact on the Kenyan economy, at least in the short term. Kenyan shares dropped 2% following the announcement of the court’s decision, anticipating further instability that will impact the market.

For Kenyan citizens the ruling might bring further violence; it will certainly bring business and much daily activity to a standstill; and it will come at a price. Roughly USD28 per capita of taxpayer’s money was spent on the first round of elections, money now effectively thrown down the drain. It is likely that round two will generate similar costs.