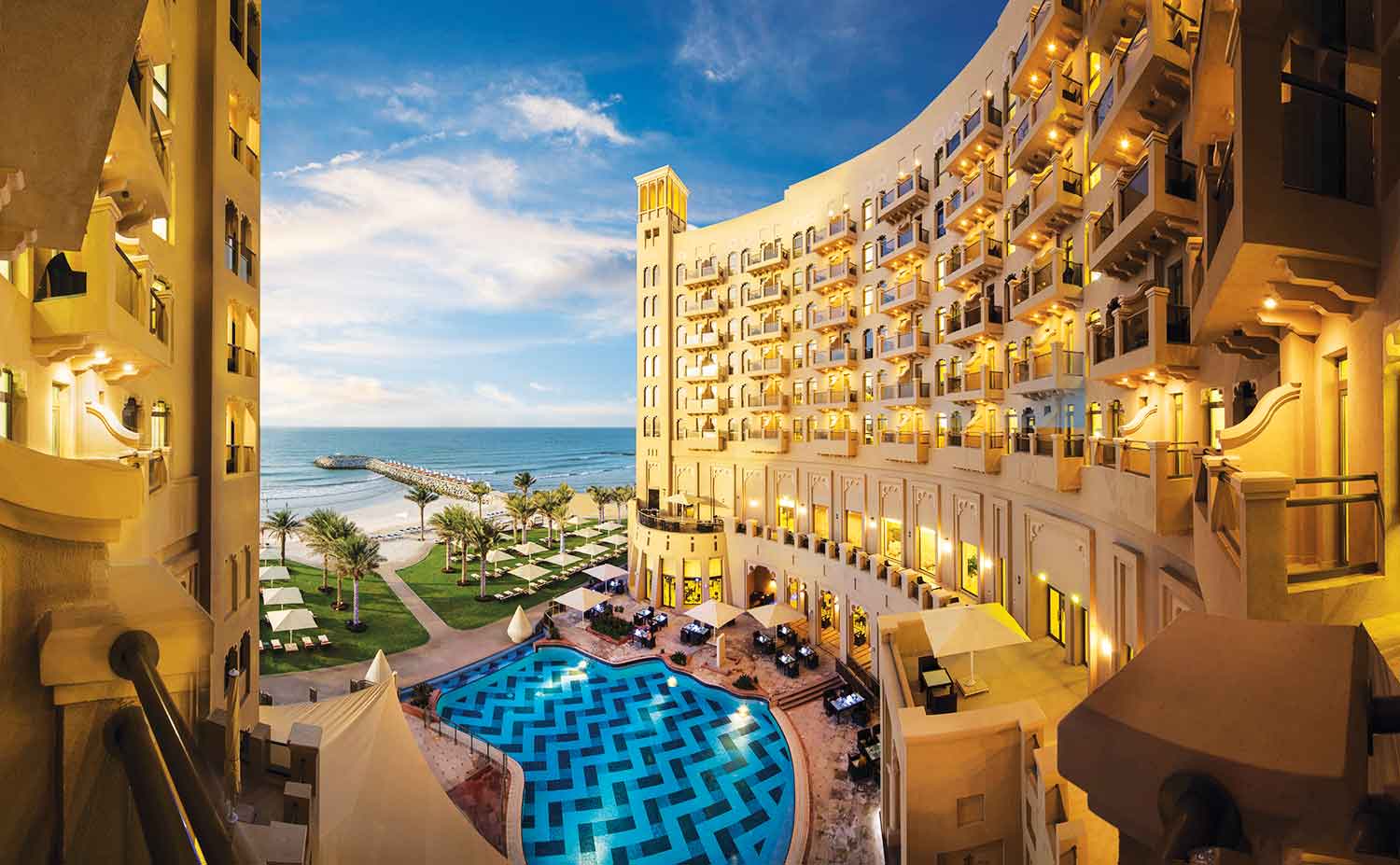 Share on:
Despite weakness in real estate markets across the UAE, developers in Sharjah are discovering that demand remains high for premier complexes that are well maintained and marketed.

The IMF expects the UAE to finish 2016 with 2.4% growth, down more than a percentage point from 2016’s 3.4% rate. Though oil is still the largest component of the UAE’s economy, a well-executed economic diversification scheme has lessened its role, and in 2015 real estate and construction accounted for nearly 22% of GDP. As oil revenues have declined, so too have state infrastructure expenditures, slowing construction growth somewhat. Still, political stability, economic potential, expectations, and quality of life considerations make Sharjah an attractive place to live.

Sharjah, typically a hotbed of activity thanks to its reputation as a cheaper alternative to Dubai, has seen its real estate market soften somewhat as prices in Dubai have fallen. According to The National, this trend could continue beyond 2016 as developers in Dubai continue to sell affordable housing. Uncertainty in the broader economy has disrupted the traditional system of inter-emirate migration whereby Emiratis reside in more affordable Emirates like Sharjah and commute to work in prohibitively expensive Dubai. Slackening demand in Sharjah has prompted landlords to drop rents.

According to real estate consultancy Cluttons, while residential rents have been declining, they have been doing so at only moderate rates. In the first quarter of 2015, rents fell an average of 5.7%, but in the second quarter the rate slowed to only 2.5%. The Abu Shagara district had the greatest declines, registering a drop of 7.7% in quarter two, representing an annual rental expenditure of AED48,000. In fact, no districts have seen any positive growth so far this year. Rents are expected to settle somewhere between 8 and 10% lower than 2015 by year’s end. Villa rents have also dropped, down 13.2% from the end of 2015, but rental rates remain fairly level. An average three-bedroom villa costs AED90,000 per year.

Still, serious investment in such quality of life infrastructure projects as like Noor Island, the Majaz waterfront, and the highway system all have the potential to draw tenants from Dubai and retain those who might otherwise leave, according to The National. Additionally, rental rates for one, two, and three bedroom apartments are up nearly 50% since the market lows of 2012, according to property management firm Asteco. Buildings with high-quality management also have far higher occupancy rates, a fact Cluttons believes bodes well for the market, so long as landlords take the weakening demand as an opportunity to distinguish their offerings through renovation and refurbishment. Sharjah and the UAE’s stable political environment continues to make the area an attractive destination for regional and global migrants escaping uncertainty at home.
Office rents have also fallen as demand has softened. Two of Sharjah’s most important office rental markets, Al Majaz and Al Majaz’s fringe areas, have seen per square foot (psf) declines—Al Majaz declined to AED70 psf and the fringe areas dropped to AED65 psf, according to Cluttons. While a shortage of prime space has limited the drop somewhat, depressed global oil prices are expected to keep demand restrained. Prices are expected to drop by a total of AED10 psf in 2016.

A new dawn of luxury and quality

The silver bullet for declining demand has proven to be luxury and quality. Across Sharjah, developers and landlords are finding that providing consumers with innovative and elegant choices stimulates purchases despite broader economic headwinds. This has proven to be the case in exclusive gated communities across the Emirate. In an interview with TBY, Hawazen Esber, CEO of Majid Al Futtaim Properties, discussed the success of Al Zahia, a 1.5 million sqm gated living community in Sharjah. “Since its launch, Al Zahia has proven to be hugely successful with homebuyers and investors,” said Esber. “With Phase 1 of Al Jouri 100% sold and fully occupied, Phase 2 of Al Jouri 100% sold and due for handover in 4Q2016, and 50% of Phase 3 of Al Narjis under construction with handover planned for 4Q2017, we are on schedule to attain our sales targets and final handover date. As a barometer for the wider growth in Sharjah’s property market, it has clearly shown that demand for high quality residential property remains strong, especially in an exclusive, gated community.” When Al Zahia is complete, it will be able to house more than 10,000 residents.

Begun in 2014 as a partnership between the government of Sharjah and Iskan Real Estate Development, Tilal City is another development that has seen sustained interest despite some weakness in the broader market. Stretching over more than 25 million sqft with five distinct zones hosting a mix of residential, commercial and communal space, Tilal City is one of the most ambitious development projects in the Emirate. The project has raised more than AED2.4 billion and attracted investors from over 25 countries. Tilal City was also the first development in Sharjah to be allowed to benefit from the Emirate’s easing of property owning restrictions for foreign nationals in 2014. In an exclusive interview with TBY, Khalifa Al Shaibani, Director General of Tilal Properties, explained the direction he sees the real estate market heading. “There are many projects in place right now, all led by joint companies, and this is because the future of Sharjah is no longer about small and individual agents, but about big and strong real estate and property companies. The government has been working with these big companies to supply the market with quality projects like Tilal City, and this indicates a greater growth and vision for Sharjah in the coming years.”

Sharjah Waterfront City, an AED20 billion project that will include 200 mixed-use towers, 95 apartment buildings, hotels, and 1,100 villas, together accommodating up to 200,000 people, is the largest mixed-use project in the gulf. The city will be constructed over 10 islands comprised of more than 60 million sqft of land and 36km of waterfront, according to Shurooq. Due to their efficiency and location outside the overcrowded city center, the government hopes that cluster cities like Tilal City, Al Zahia, and the Sharjah Waterfront City will become the new normal for residential living in Sharjah

Land prices remain far cheaper in Sharjah than in some of the surrounding Emirates, making new developments a far more profitable proposition. With land selling for roughly one-fifth the price of what comparable lots might fetch in Dubai, Sharjah remains an attractive location for developers. As Mohamed Bin Dalmouk, Chairman of Bin Dalmouk Engineering, pointed out in an exclusive interview with TBY, “10,000sqft can be purchased in a good location in Sharjah for USD4 or USD5 million, whereas in Dubai it would cost around USD25 million. The RoI here in Sharjah is better than Dubai as you can cover 8 to 12% of the cost of the project, but in Dubai this figure is closer to 6 to 8% because of the cost of the land.”

If you build it, they will come

Part of Sharjah’s Tourism Vision 2021 is to attract over 10 million tourists to the Emirate by 2021. To this end, Sharjah has put great emphasis on tourism-related construction projects, and the Emirate now has over 10,000 hotel rooms and expects 4,000 more to be developed in the next couple of years. According to Shurooq, hotel revenues were up nearly 7% in the first half of 2016. As tourism continues to develop, demand for new projects is expected to rise, adding to the pool of over 100 hotels and hotel apartments currently operating in the Emirate.

Basma Group Sharjah recently announced that it had awarded an AED120 million hotel project to a Klampfer Middle East. The four-star hotel, the Novotel Sharjah Expo, will have 200 rooms, two meeting halls, and a function hall. The project hopes to attract a sizable piece of the region’s AED4.8 billion meetings, incentives, conferences, and exhibitions market.

Though declining global oil prices have translated into falling government revenues and occasional cuts in public spending, authorities recognize the value and necessity of large-scale projects and have been reluctant to make serious cuts. According to the Khaleej Times, the Sharjah government’s 2016 budget keeps spending on infrastructure projects at consistent levels. Road projects like the Badeea project, an AED200 million plan that includes road and bridge construction to highway systems connecting Sharjah and Dubai, are vital to the continued vibrancy of the economy, and they remain a central piece of the government’s development strategy. Roads, bridges, and utility infrastructure projects aimed at reducing congestion in problem areas remain one of the major focuses of public and private initiatives in Sharjah.

Within the sphere of the Tourism Vision 2021, by which the Emirate of Sharjah aims to attract 10 million tourists by 2021, a plan to change the face of Sharjah and contribute to this goal has already been launched. Sharjah WaterFront City, a tourist city of the future, is rapidly taking shape in the Emirate’s northeast coast to become the third largest mixed-use development in the GCC.Developed by Sharjah-based Oasis Real Estate Development, the AED20 billion project will spread across 36km of coastline, covering 60 million sqm, and upon completion will be home to 200,000 residents. The Waterfront consists of 10 natural islands all interconnected by bridges and canals. Roughly 60% of the area will be landscaped into beaches and parks, while the remaining 40% will consist of buildings, a ratio that developers believe will enhance the city’s attractiveness. It will comprise 200 towers, 95 apartment buildings including luxury apartments and hotels, 1,100 villas, marine clubs, a 3.3 million sqft shopping mall, as well as schools, mosques, banks, shops, and restaurants. A further feature will be its water theme park, Crystal Lagoon, designed by the world renowned Jack Rouse Associates. Hayssam El Masri, president of Oasis, told TBY that the park will have over 30 family-friendly attractions and evening shows. Furthermore, the whole city will be served by an integrated tram.The project is representative of the Emirate’s holistic approach to strengthening the economy through commercial, leisure, and cultural aspects. As HE Al Noman, President of the Sharjah Commerce and Tourism Development Authority, explained; “This is a goal that cannot be achieved by any particular sector on its own. Everyone must support this vision in a collaborative framework to achieve the Sharjah Tourism Vision 2021.” If tourism has become a primary aim for the country’s governing bodies, Sharjah Waterfront’s project is undoubtedly at the forefront of this vision, and is set to deeply transform Sharjah’s face and reputation for years to come.