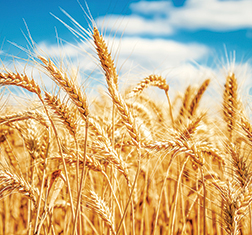 Share on:
Farming stretches far back into Kazakhstan's history, and agriculture forms an important part of the nation's identity to this day.

Kazakhstan has more arable land per person than anywhere in the world with the exception of Australia. The world’s ninth-largest country devotes around a tenth of its land, or 250,000sqkm, to cultivation. The country has a very low population density of 1.47ha per person. Kazakhstan covers 2.7 million ha, of which 80% is farmed in one way or another, although around 70% of this is permanent pasture, its grassy plains ideal for herding livestock—as it has been used for centuries by nomadic herders, migrating with the seasons in a practice known as transhumance. Today agriculture contributes 6.9% to GDP, and employs around 20% of the workforce.

A vast new greenhouse complex at Pavlodar, in northeastern Kazakhstan, opened in 2016. The technologically advanced greenhouses are part of a wider scheme to ensure Kazakhstan’s future food security, namely self-sufficiency in fresh produce. Spread over 3.4ha, Pavlodar is expected to yield 1,600 tons of tomatoes a year, along with a varietyof other crops ill-suited to the country’s harsh climate.

Kazakhstan is among the top four wheat flour exporters in the world, with total wheat production for 2015 estimated at 13.7 million tons, 6% higher than in 2014, putting it second only to Canada for wheat productivity. The increase is largely due to the favorable weather conditions over 2015, resulting in an export bag of 6.6 million tons of flour.

The black chernozemic soils of northern Kazakhstan are very fertile, and the dry climate can enable high production of durum wheat, ideal for making pasta. However, the area receives low rainfall (less than 500mm a year) and is prone to periodic drought, so production varies greatly from one year to the next. The northern region is well suited to growing rye, barley, and oats, the production of which has increased by 10% since 2014—part of a government drive to wean the country off a surfeit of wheat and onto more profitable exports. Although wheat exports rose last year, overall the country’s production is down some 20% YoY, due to a deliberate reduction of its planted area (of 11% since 2014). Weaning the industry off its traditional wheat staple is a wise strategy; export prices of wheat have fallen worldwide, and in February 2016, a ton of Kazakhstani wheat fetched just $90, down a further 7% MoM, and 40% YoY. (In 2010, that ton would have fetched almost $400.) The fall in wheat prices has been exacerbated by the devaluation of the tenge in 2015, being more marked in Kazakhstan than in most other countries.

Wheat has a long and important history in Kazakhstan. In the 1950s, the Soviet leader Nikita Khrushchev saw the potential of the steppes of northern Kazakhstan for growing wheat. He proceeded to develop what he called the Virgin Lands, or “Tselina,” from which Astana derived its former name of Tselinograd. By 1955 almost 355,000sqkm of uncultivated and empty steppe grassland had been ploughed for wheat. In the beginning, the Virgin Lands campaign, aided by 500,000 young Russian and Ukrainian workers, was very successful, yielding in excess of 40 million tons of wheat per year. And yet poor centralized planning from Moscow, coupled with erratic weather patterns through much of the 1970s and 1980s, led to a fall in production. The collapse of the Soviet farming system after independence in 1991 saw vast tracts of land fall into neglect, which explains some of the fallow expanses to this day (often still littered with the rusted remains of hundreds of tractors and other Soviet-era machinery).

Since 2000, wheat production in Kazakhstan has made something of a comeback, often on the back of investment from the American and Canadian wheat business. Farming in Kazakhstan is akin to prairie agriculture—on a big scale, it favors huge farms, sometimes of 100,000ha or more. Yields average around one ton per hectare, and the northern stretch of the country has potential to attract increasing levels of FDI as the combination of better quality crops and broader diversity take hold.

With the country so well-suited to growing wheat and other arable crops, the rearing of livestock has recently taken second place in the country’s farming matrix. The nature of farming in Kazakhstan makes it better suited to large-scale mega-farms, and not the smaller livestock-rearing farms of yesteryear (Kazakhstan was, of course, for centuries the home of nomadic herders, migrating with the seasons across its wide open grasslands, or steppe.) Today, livestock is smaller yet higher quality, following a program of interbreeding Kazakh stock with animals from America. In 2015, Kazakhstan imported 10,000 Aberdeen Angus and Hereford cattle from Canada, the US, and Europe. Importantly, Canadian breeds are particularly well suited to Kazakhstan’s winters. Indeed, Canada’s livestock trade with Kazakhstan is now worth $50 million, and growing. By 2016, around 20% of the country’s beef and dairy herds are thought to be Canadian origin. Most of the animals are imported from Canada on the KazAgroFinance program, though increasingly private firms are teaming up with Canadian counterparts directly.

With better yields, and more efficient breeds, Kazakhstan is positioning itself to increase its meat exports, particularly to China, but also the halal market of the GCC countries. The government in Astana has an ambitious target to increase beef exports to 180,000 tons by just 2020—mostly to China and Russia. The country’s herds are mostly located on the western steppes.

The upgrading of livestock is vital. On average, milk yields in Kazakhstan are 60% lower than their European counterparts. The country imports 40% of its dairy requirements. In 2015, President Nazarbayev launched Agribusiness 2020, a farming-wide program of development that puts dairy at the center of its ambitions. In particular, Agribusiness 2020 aims to create 100 family-sized companies, and 10 large companies, which together will produce specified dairy products. By 2020, it is envisaged these new companies will contribute to Kazakhstan being 90% sufficient in dairy produce. The country produced 55,700 tons of fresh milk in 2015.
The beef cattle herd has shrunk from 9.67 million head in 1990 to 5.69 million head in 2014. The country is home to 12 million sheep. And while beef exports are an important part of the industry, at home it is horsemeat that is the bigger sector. As with beef, Kazakhstan is in talks with partners in Canada for sales of live horses to upgrade the genetic quality of its herds (although Canada is a long-term supplier of horsemeat products to Kazakhstan).

In February 2016, the Vice-Minister for Agriculture, Yermek Kosherbayev, announced Astana’s intention to establish an Islamic Organization for Food Security, an initiative of President Nazarbayev. Vice-Minister Kosherbayev was speaking at the Global Forum for Innovations in Agriculture, in Abu Dhabi. The UAE and Kazakhstan have a close partnership in developing food security initiatives, with the Emirates being an early investor in Kazakhstan’s farming since 2008. That year, Abu Dhabi-based Al Qudra bought 400,000ha of prime Kazakhstani agricultural land as part of its international efforts to build the UAE’s levels of food security (the country imports around 85% of its food).