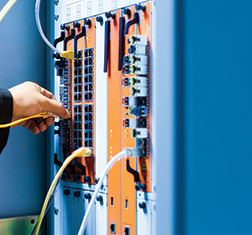 Lined Up and Ready

Share on:
The Mexican mobile market presents large potential for international investors, given there is still a great deal of ways to go in terms of extending the penetration of mobile services there.

Four years after the initiation of major reforms to instill competition in a sector heavily dominated by América Móvil, it has been observed that the targeted changes will only be achieved in the long term and that curbing América Móvil’s dominance in the fixed-line and wireless market will prove to be more challenging than initially foreseen.

According to the most recent data disclosed by the sector regulator the Federal Telecommunications Institute (IFT), in the last quarter of 2016 the fixed line market generated an average of 1,373 minutes of traffic by line, during which time América Móvil’s Telmex maintained its leading position with a 62.6% share, followed by Grupo Televisa with 12.9%, and Telefónica with 9.2% shares.

In the mobile market América Móvil’s Telcel had a market share of 64% at year-end 2016, displaying a 3-percentage point decline over the previous year and serving 72 million lines out of a market total of 111.7 million lines. Telefónica and AT&T’s shares increased slightly to 23% and 11%, respectively, serving 26 and 12 million lines, respectively, as of end 2016. The market total displayed a 4% increase over the previous year, reaching 111.7 million lines at end 4Q2016, where payment schemes were distributed as 84% prepaid and 16% postpaid. The utilization rate increased by 2.3% YoY to 91 lines per 100 inhabitants, with regional differences reaching as far as 137 lines per 100 inhabitants in Mexico City, and as low as 60 lines in the states of Oaxaca and Chiapas.

Mobile broadband lines displayed one of the highest growth rates in the sector, increasing by 16.6% YoY to 74.5 million in 4Q2016, as the utilization rate reached 61 lines per 100 inhabitants, up by eight lines. América Móvil (Telcel) and Telefónica had a consolidated share of 86% of all lines in this segment, followed by AT&T with 12.4% share. The share of Mobile Virtual Network Operators (MVNOs) increased to 1.6% of the market, reaching 1.2 million mobile broadband lines with an increase of 372,000 lines compared to 4Q2015.

Monthly average of megabytes per line was 892MB in 4Q2016, a level surpassed only by AT&T and América Móvil (Telcel) with 1,609 and 912MB, respectively, followed by Telefónica with 655MB. MVNO’s monthly average was 216MB per line, where the main players were Virgin Mobile and Weex lines, using on average 280MB and 180MB, respectively. Overall, total consumption in the segment grew by 135% in terms of data traffic in 4Q2016 compared to the same period in 2015.
In terms of the technology used, 55% of traffic of data was exchanged over the 3G network, 44% through the 4G network, and the remaining 1% through the 2G network. The IFT emphasizes the 16% YoY drop in the utilization of 2G technology in 4Q2016, and 82% and 303% surges in 3G and 4G, respectively.

The pay-TV market grew by 10% in 4Q2016, reaching 20.1 million subscribers, making Mexico Latin America’s largest pay-TV market, surpassing Brazil, which has 18.8 million subscribers. Meanwhile, the penetration rate increased from 56 subscriptions per 100 households in 4Q2015 to 60 subscriptions per 100 households in 4Q2016. Grupo Televisa, the world’s biggest Spanish-language broadcaster, was the market leader with 61% share of subscriptions, including its units Sky (38.1%), Cablemás (8.7%), Cablevision (5.1%), International Television (3.3%), Cablevisión Red (3.1%), and Cablecom (2.8%). This was followed by Dish-MVS with 16.7% and Megacable-MCM with 14.6%. In March 2017, the sector regulator made a surprise announcement and declared Televisa to have a dominant position that could prevent competition in the pay-TV market. The ruling by the IFT is seen by the sector as a signal toward the imposition of restrictions to level the playing field. The company had already declared its profit rates to be under the pressure of advertising competition from its main domestic rivals, and announced a nearly 60% fall in fourth-quarter net profits, as reported by FT, and a decision to slash 2017 investment by one-third.

Overall, Mexico’s telecoms sector generated MXN546 billion in 4Q2016, over an annual growth of 8%, growing three times faster than the overall economy and contributing 3.6% of total GDP. The sector was the eighth-largest sector of the economy. Sector experts suggest that widespread implementation of flat rate plans resulted in a large 28.5% decline in mobile telephony prices YoY, suggesting that the growth in the sector’s revenues can be attributable to a rise in penetration rates.

But the results of the 2014 regulations are slow to kick in. According to the Competitive Intelligence Unit (CIU), a Mexico City-based consulting firm, as reported by Dolia Estevez in Forbes, América Móvil’s market share, still significantly above the threshold level of 50% set by the IFT, would only be reduced to 55% by 2020.
In order to push forward towards this target, in March 2017, the regulator has imposed new restrictions on América Móvil’s owner Carlos Slim urging him to separate the company’s infrastructure into independently operated units, without necessarily divesting them. The ruling by the IFT was a decision taken after an evaluation of the “asymmetric regulations” imposed on América Móvil in 2014 that would open the sector up to competition. América Móvil, whose margins have been compressed by the asymmetric regulations and the competition of new entrant AT&T, opted to challenge the resolutions in accordance with the relevant legislature, suggesting that the dramatic fall in the prices in mobile services were the proof of effective competition, making further asymmetric regulations redundant. América Móvil was reported to challenge the situation where it feels it is subsidizing AT&T through the requirement to lift connection fees, remove long-distance charges, and share infrastructure. The company also hopes to win clearance to move into the pay TV sector, an activity that the company is forbidden to engage in under the terms of its fixed-line concession.
América Móvil recently announced that further key modifications required by the regulator are the incorporation of a legal entity independent from Telmex-Telnor that will exclusively provide wholesale services related to local loop and shared access and use of passive infrastructure. A formal separation plan of the company’s fixed-line business will be implemented depending on IFT’s approval.

Meanwhile in May 2017, the IFT approved América Móvil’s mobile business Telcel’s application to acquire 60MHz of 2.5GHz spectrum from broadcast firm Grupo MVS. The regulator approved the deal deeming that Telcel boosting its spectrum scope would not adversely affect competition in the market, specifying that the deal posed no risks to the process of competition and free competition, or concentration contrary to the public interest in the relevant and related markets. The spectrum had been in use by Grupo MVS for radio and TV services over a block that covers over 75% of the country’s population. Wireless market leader Telcel’s share of Mexico’s available wireless telecommunications spectrum thus increased from 20% to almost 30%.

The delayed tender for the most ambitious telecoms project to date, the establishment and operation of 4G LTE services using the 700-MHz band spectrum to at least 92.2% of the country in seven years, was awarded in November 2016 to the Altán Consortium, backed by Chinese capital and Morgan Stanley Infrastructure Management. The consortium was the last remaining bidder for the tender on the national wholesale mobile network. Its biggest investor with a 33.38% stake is Marapendi Holding BV, an indirect subsidiary of North Haven Infrastructure Partners II, an infrastructure fund managed by Morgan Stanley Infrastructure Management. The shared network project, called Red Compartida, is expected to make investments of more than USD7 billion over the project lifetime. It is expected to start operations on March 31, 2018. The concession will have a term of 20 years with an option to extend for an additional 20 years. Morgan Stanley Infrastructure declared that it would be the world’s largest open access, wholesale telecoms network.

The shared network will be established as a public-private partnership, where the government will install the spectrum and fiber optics designed to reach remote corners of Mexico. The network will be rented by retailers, resulting in reduced costs as these will not be incurring any capital expenditure.

The second-largest investor in the project with 23.36% share is the China-Mexico Fund, which was set up in 2014 to invest in infrastructure projects and is managed by the International Finance Corporation. Other investors in the project are the IFC, with a 3.34% stake, Canadian pension fund “Caisse de dépí´t et placement du Québec” (CDPQ), in partnership with CKD-IM, with 12.68%, Grupo Multitél of Spain as a strategic partner, Mexican telecoms companies Axtel, and Megacable with 4.01% each.

The IFT had postponed the auction of an auction for up to 130MHz of 2.5GHz band 4G mobile spectrum in order to match the changes in the 700MHz auction process. Now that the process is concluded, the regulator has announced the auction will be executed in the second half of this year. It also announced that the bidding framework for the 2.5GHz auction will be published in the second quarter of 2017, ahead of the launch of the auction process in the third quarter. It was reported that the government expects to reach an agreement with the US on spectrum co-usage in border regions before awarding the new 4G frequencies.

Prospects for the future

The Mexican market presents big potential for international investors, as Carlos Morales Paulí­n, Country Manager of Telefónica, explained to TBY: “There is a huge market in Mexico and this presents a great opportunity for Telefónica Mexico. There are 120 million people in this country and only three operators. Furthermore, Mexico has a large number of young people. They love social networks and connectivity and this presents a great opportunity. In Mexico, we are behind other Latin American countries in terms of penetration of mobile services; there is still a great deal of ways to go in terms of extending the penetration of mobile services here. Finally, Mexico is economically stable. Despite the issues with the US, we will still grow by 1.5%.”