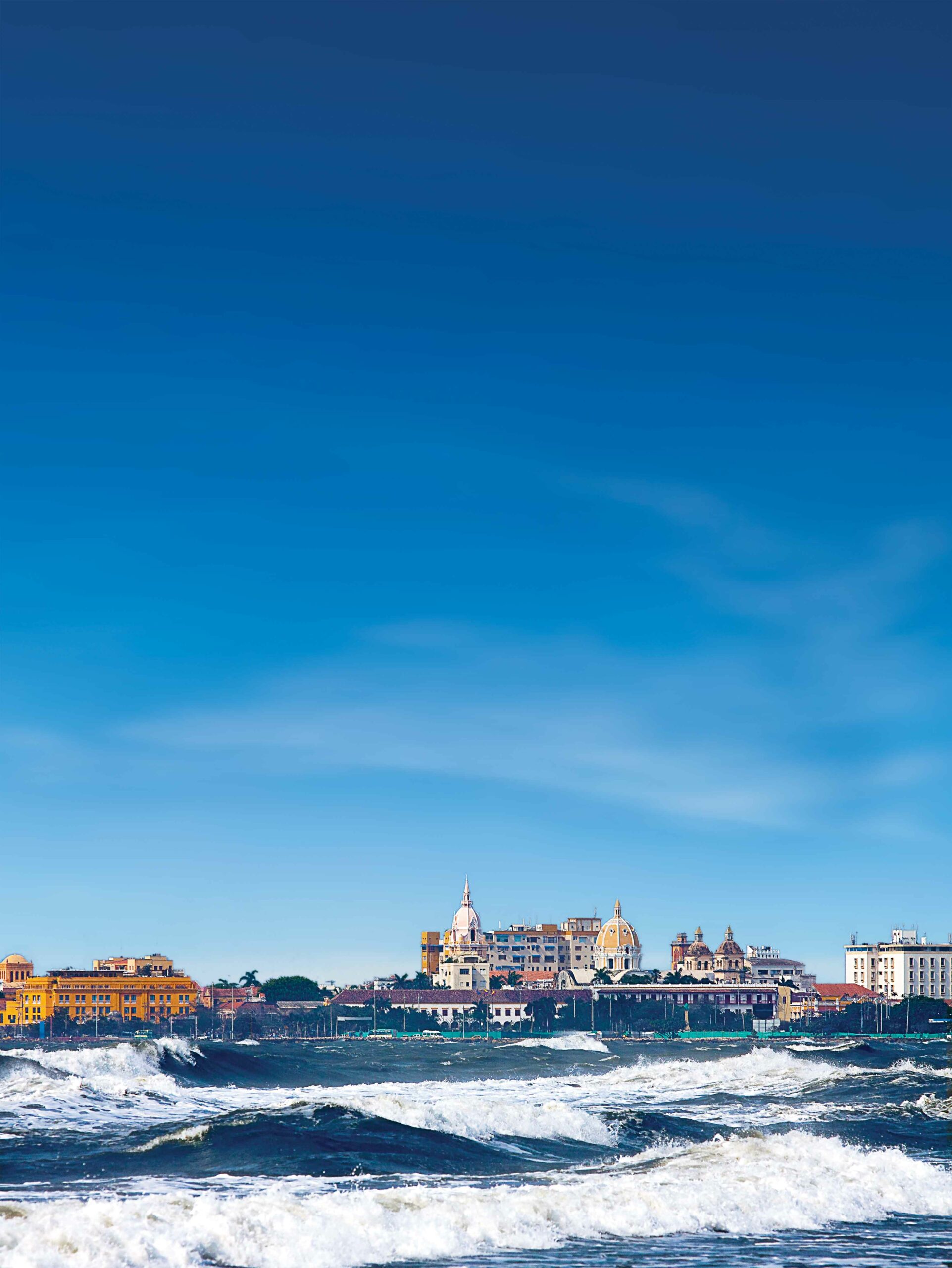 Share on:
With international five-star and luxury brands entering the country, the face of the hospitality market is getting a major makeover, with high style and modern accommodation adding to the existing landscape of rich cultural heritage.

In February this year, Colombia’s Tourism Ministry revealed their renewed tourism strategy at the Vitrina Tourism Trade Fair, showcasing over 282 destinations and 964 tourist experiences to new international markets, working with ProColombia—the institution responsible for commercial promotion of non-traditional exports, international tourism, and foreign investment in Colombia—and Fontur, the national tourism fund, according the Bogota Post. The strategy’s slogan, “Colombia es Realismo Mágico” [Colombia is Magical Realism] is a reference to one of Colombia’s most iconic authors Gabriel Garcia Marquez, whose literary style normalized magical, dreamlike scenarios as a part of everyday life. From the carnivalesque array of vendors, parks, and Roman Catholic churches abutting rapid modernization and innovation in Medellin, to the surreal, lush jungles of the Amazon, and the kaleidoscopic beaches of the Caribbean, Colombia’s new slogan is not only an homage to a national hero, but an apt description of the country’s dazzling offerings to visitors, and a booming tourism sector to match. Marquez himself famously dismissed praise of his imaginative novels by explaining that, “the problem is that Caribbean reality resembles the wildest imagination.”

While the country’s tourism industry was formerly defined by long-term travelers stopping over in the midst of a greater Latin American trek, increasingly, visitors are choosing Colombia as their specific vacation destination, particularly after emerging from decades of instability and a debilitating armed conflict that previously kept visitors away. The rise in tourism is being lauded as a major national achievement, with President Juan Manuel Santos announcing that by 2018 he hoped 5 million visitors from abroad will bring in $6 billion of foreign currency. According to the World Trade Organization and the World Bank, international tourism arrivals in Colombia have increased 260% since 2002, when fewer than 550,000 foreigners came to the country. Meanwhile, the silver lining to the depreciating Colombian peso is increasing affordability of the destination, though the sector is already a strong factor for the economy; travel and tourism contributed $14.7 billion to the Colombian economy in 2013—around 5.4% of GDP. Statistics published by the Tourism Ministry this February show that Colombia welcomed over 4 million visitors in 2014—an increase of 11.9% YoY. Non-resident foreign nationals made up the largest segment of visitors entering Colombia in 2014, which showed an increased of 14% YoY, with a total of 1.97 million. The largest group of foreign nationals arriving to the country came from the US, representing 80% of 2014’s visitors, with 17% coming from Europe, and 3% from the rest of the world. Non-resident Colombians living abroad were the second largest group of visitors last year, with the Tourism Ministry recording nearly 600,000 returning to the country. Cruise ship tourists increased by 2.4% to just over 314,000, while visitors arriving at shared border zones with Ecuador and Venezuela accounted for the remainder of the 4 million total visitors last year. Domestic flight traffic was also up last year versus 2013, with over 20 million journeys made in 2014. Top destinations for Colombians travelling abroad were the US with 32% and Canada represent 12%, making a total 3,820,495 trips outside the country last year.

SUSTAINED BY THE SENSES

According to the Tourism Ministry, hotel occupancy rates rose to 53.4% in 2014. In the final quarter of last year, the business, restaurant, and hotel industry accounted for 27.2% of national employment, and hotel staff increased by 4.9% in April 2014. In January 2015, the real income of the hotels increased 10% compared to the same month last year, when it was 3.7%. For the month of December 2014, the real income of the hotels increased 11.3% compared to in December 2013 with 2.1%, according to the National Administrative Department of Statistics (DANE). At the end of 2014, the average rate for single room increased 2.2% YoY, double rooms by 2.3% YoY, suites by 2.0% YoY, and other room types by 2.2%.

The increasing safety in Colombia has lead to a hotel boom over recent years, especially to accommodate Bogota’s status as a top destination for business tourism. In 2014, 310,861sqm of destination hotels were recorded, representing an increase of 28.7% YoY when 241,616sqm was recorded. Meanwhile the hotel area in process reached 3.13 million sqm, which represents a 10.5% increase YoY compared to 2.83 million sqm. In Cartagena alone, 17 new hotels are expected to open by the end 2015. InterContinental Certagena de Indias, targeting both business and leisure tourism, opened in December, and the Sheraton Cartegena Hotel is scheduled to launch in June. Major hotel chains such as IHG, JW Marriot, Radisson, Hilton, and the Holiday Inn are already present in the country, and in February the Four Seasons announced plans to open two luxury hotels by the end of the year in Bogota. Partnering with South American banking, real estate, and industrial conglomerate Gilinski Group, Four Seasons will open the Four Seasons Hotel Casa Medina Bogota—formerly Hotel Casa Medina Bogota—in a historic property in the city’s financial center, and the contemporary Four Seasons Hotel Bogota—formerly Hotel Charleston Bogota—located in the shopping heart of the city. In December 2014, W Hotels also opened their third Latin American hotel Bogota, a 168-room property including three dining and bar options, owned by Terranum and operated by Starwood.

Bogota was by far the most popular destination among visitors from abroad, with just over half stopping off in the capital. However Colombia’s ecotourism offering is also a major draw for travelers, for the numerous national parks such as Los Nevados high in the Andes, the Caribbean park Tayrona, Amacayacu in the Amazon, and Otún Quimbaya in the Andean coffee-growing region. From January to September in 2013, the Caribbean grasped the majority of visitors per national park region with 88.5%, with the Andes following with 10.8%, the Pacific Ocean with 0.7%, and the Amazon and Orinoquí­a regions with 0.002% of visitors. The country’s wide range of arts and culture events also attract visitors from around the world, from the Bogota International Book Fair—comprised of 420 exhibitors, 433,000 visitors, and 150sqm of exhibition space—to international classical music festivals Bogota and Cartagena. Cali is set to host the first International Dance Biennial, or Bienal de Danza, in November 2015. Regarded by the mayor as a key event for the city, Bienal de Danza will be comprised of over 600 dancers from dance companies across the world performing a wide variety of genres.

ALWAYS SOMETHING LEFT TO LOVE

Under the current government, the budget of the Ministry of Culture (MoC) has risen by 92% over the past four years. As the country emerges from violence and the popularity of its destinations rise, government investment into the industry grows. The MoC’s commitment to the sector and the economy as a whole is defined by “a firm commitment to encouraging reading and writing, and the strengthening of public libraries nationwide, as well as to liaising with other ministries such as the Ministry of Education, or even the Ministry of Agriculture, regarding cultural projects in rural areas,” Culture Minister Mariana Garcés Córdoba told TBY. Between 2010 and 2014, 39 cultural heritage sites and 290 buildings have been recovered, as a testament to the Tourism Ministry’s conviction to resurrect infrastructure for cultural centers and educational institutes. President Santos also told Vitrina delegates that the government is set to invest $1.1 million in infrastructure developments for 39 airports, as apart of his tourism strategy to meet the growing demand, generate employment, and attract more investment into the sector. Colombia has 13 international airports, and expansion projects include the country’s main air terminal El Dorado International Airport in Bogotá, to increase the current capacity of 50 operations per hour and 27 million passengers per year, to 90 operations per hour and approximately 40 million passengers annually by 2021; airport investment in Barranquilla will be $138.47 million to repave the runway and remodel the passenger terminal; $92.58 million is to be invested in Cali, in the Alfonso Bonilla Aragón International in Palmira to increase the number of gates and expand the passenger terminal; the airport serving the Amazon border city of Leticia will receive an investment of $56.57 million; and the President also revealed plans to construct an airport in Quibdo, the capital city of Chocó, at an investment of $71.2 million, according to Finance Colombia. Scheduled to launch the end of March this year, Dutch airline KLM will resume direct flights from the Netherlands to Colombia after a 20-year hiatus. KLM will fly three times a week from Amsterdam to Bogota, continuing to Cali, and from the capital of Valle de Cauca directly back to the Dutch capital. Also, Colombia’s national carrier Avianca is likely to change their route from El Dorado to London, launched in July, from four times a week to daily later this year.