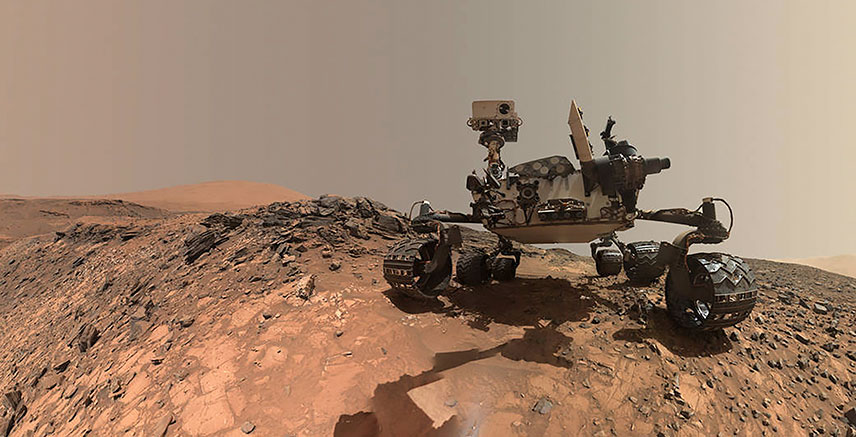 Share on:
The Hope mission to Mars, set to be launched in 2020, is the first step of the UAE’s ambitious plan to build a city on the Red Planet by 2117.

Finding commonalities between a food security program and a space mission to Mars may prove a rather ambitious intellectual effort, to say the least. On paper, they could barely look more different.

One incorporates immediate, day-to-day actions motivated by a sense of urgency that cries for survival.

The other is a product of long-term strategic planning to put the Arab world back on the map of scientific research and progress after almost 1,000 years. Survival versus revival. Earth against sky. Agriculture and aerospace.

For those who think the list of dualisms could go on forever, we highly recommend a trip to the UAE. In a country historically blessed with abundant hydrocarbon resources, problems have often been tackled with straightforward leadership guidelines and an abundant cash flow.

Sometimes this powerful combination does not suffice, and a “thinking out of the box” approach is needed. Admitted the box in case is planet Earth, the UAE has taken this expression pretty literally.
Yet “often” does not mean “always.”

The relationship between the activities of Abu Dhabi Food Security Center and the UAE Space Agency is utilitarian in nature: the activity of one is justified by the fulfillment of the end goal of the other. Simply put, the two variables share the same objective.

The arid, desert-like environment surrounding GCC countries, including the UAE, represents one of the most pressing challenges for a country that imports 90% of its food and is heavily characterized by water scarcity. In fact, these two issues around food and water still cannot be solved at the same time: the process of agricultural expansion to overcome the gap in food security is in turn aggravating the severity of water shortages.

The risks associated with this enduring dilemma have been mitigated through heavy investments in seawater desalination technology, but with urban population predicted to grow up to 9.9 million by 2020, a more sustainable, longer-term solution is needed.

“We are in an arid region, facing challenges that any country in this environment would face,” said Mariam Al Mehairi, the Minister of State for Future Food Security. “We need to put our heads together and come up with tangible, sustainable solutions for the food production sector.”

This is where the UAE Space Mission to Mars comes into play. Set to be launched from Earth in a brief window of time in July 2020, a rocket containing a spacecraft named “Hope” is expected to arrive on Mars in 2021 after a seven-month journey.

The journey therefore holds a specific scientific purpose to understand what learning lessons can be transferred to Earth and more, specifically, to the desert states such as the UAE.

In the words of UAE Space Agency Director General, Dr. Mohammed Naser Al Ahbabi, “Our environment is not that different from Mars. We face the same challenges. For example, Mars today is a desert, with no atmosphere; however, we can see and tell from the structure of the planet that there was once water there.”

One of the aims of space agencies worldwide is to understand why water disappeared on Mars, in order to prevent the same from happening on Earth. The Gulf’s environment, in some way, is similar to Mars’ surface. The idea is then to employ the best scientists in the world to solve issues that affected another planet, so that spin-off solutions can be applied on Earth.

Delving into the underlying factors that lead to the disappearing of water on the Red Planet may not only prevent the same from happening on earth, but also provide the necessary tools to maximize efficiency of water management in those countries where food security lies at the top of national priorities.

At the moment, apart from the already mentioned desalination plants, the UAE has been looking abroad to address this issue. Most notably, it has invested in agricultural projects in Pakistan and Thailand for rice cultivation and in Sudan, close to the Nile River, for feed cultivation. Considered by many an overly-ambitious goal, there is reason to believe that looking at Mars is just a natural step in the line of succession for a country that has always set its targets higher than any other country.

Dr. Ahbabi also stressed the broader scope of such a mission: “We need to team up with the international space community to ask big questions not specific to countries, but to humanity.”

The Hope journey thus represents only the first founding step of a much wider, longer-term vision that has its final realization in Mars 2117 project. Announced in 2017 by His Highness Sheikh Mohammed Bin Rashid Al Maktoum, Ruler of Dubai and Prime Minister of the UAE, the Emirates has embarked on a 100-year plan to prepare national cadres to facilitate the transport of people and build the first city on Mars.

While 100 years sound like an eternity for normal human beings, space scientists and astrophysics have a different view. This is why as soon as Hope will be launched, the UAE will engage in the building of Mars scientific city in Dubai, a real-time laboratory that seeks to recreate the living conditions of the Red Planet.

Rather than the ultimate goal, for the UAE prestige is simply a consequence of its achievements.