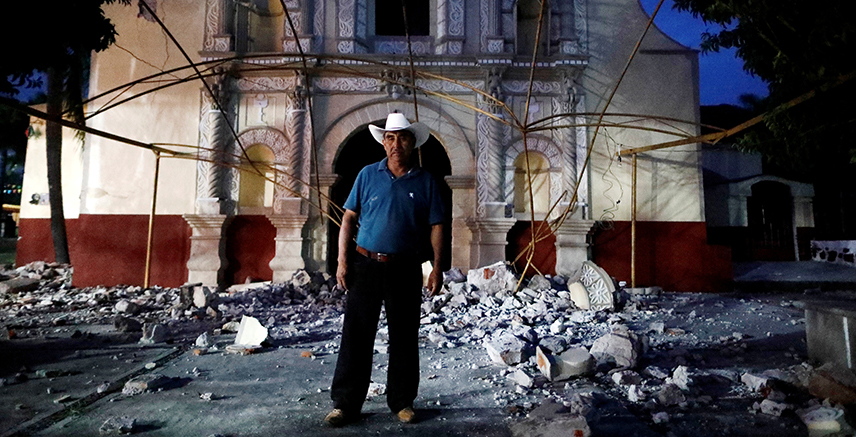 Share on:
President Peña Nieto estimates that the cost of earthquake damage will exceed USD2 billion.

Juan Sanchez, 53, a parishioner and a church guard, poses for a portrait in front San Juan Bautista church after an earthquake in San Juan Pilcaya, at the epicentre zone, Mexico, September 28, 2017

Mexican President Enrique Peña Nieto announced last week that the country will need over USD2 billion to recover from the damage caused by two earthquakes in a two-week period.

In all, more than 400 people died and over 200,000 Mexicans have lost their homes. Key infrastructure was also severely damaged, and 100s of schools have collapsed.

Rebuilding the country in the wake of these two natural disasters will not be an easy task, and the Peña Nieto administration has said already that it will need the support of the private sector to start reconstruction.

In that regard, Mexican billionaires have responded to the call and have donated large sums of money. Carlos Slim, for instance, has said that will give 5 pesos for every 1 peso that people transfer to his foundation’s bank account to support relief efforts.

Chiapas and Oaxaca, the two most damaged after the September 7, are the two poorest states in Mexico, and as a result their buildings had weaker foundations those of other parts of the country.

Additionally, much of the devastation took place in remote locations and small villages scattered through that mountainous region, two factors that made aid distribution more difficult in the aftermath of the catastrophe.
The media has shown images of bridges completely tilted, cracked roads, and hundreds of people have lost their poorly built brick and concrete-made homes.

Thus, the Mexican government estimates that at least half of all the aid for relief support will have to be spent in Oaxaca and Chiapas.

To rebuild and repair houses in these two states alone, Mexico calculates that it will need to spend USD335 million, or 15% of the total estimated budget.

The allocation of these resources has already been sent to local governments to start immediately with these recovery operations, while a second will be sent in the coming weeks, according to the president.
Mexico will spend around USD600 million to reconstruct and refurbish homes in the remaining estates impacted by the September 19 earthquake. In Puebla, Morelos, and the capital, more than 40 buildings collapsed during the 1-minute long tremor.

Almost a third of this expected cost will need to be spent on schools.

Mexico will need about USD760 million to refurbish 12,931 schools that were not built according to protocol, and consequently were damaged by either earthquake.

Global attention during the September 19 quake was focused on the Enrique Rebsamen school in the south of Mexico City, where around 20 children and four adults died after the building collapsed.

Mexican media has exposed that the structure collapsed because of poor construction standards.

According to local reporters, the principal had constructed an apartment for herself and a jacuzzi on the top of the classrooms, which added significantly more weight to the ceiling.

The country will also have to invest USD437 million to repair around 1,500 buildings of cultural interest that were damaged and could collapse in the coming days.

In July next year, Mexicans will go to the polls to vote for their new president for the 2018-2024 period.

The disaster will have a considerable effect on the upcoming campaigns for candidates to become to next president of the Mexican Republic.

All the main candidates have redirected considerable financial resources for their campaigns and donated this money to relief efforts having come under intense pressure from civil society groups.

It will take months for Mexico to get back to normal following these two disasters.

Reconstruction is the country´s priority at the moment. However, earthquake protocols need to be reexamined and the authorities have to ensure that every building fully complies with the certification required. And that is the next key step if casualties are to be reduced in the next quake that will hit the country.