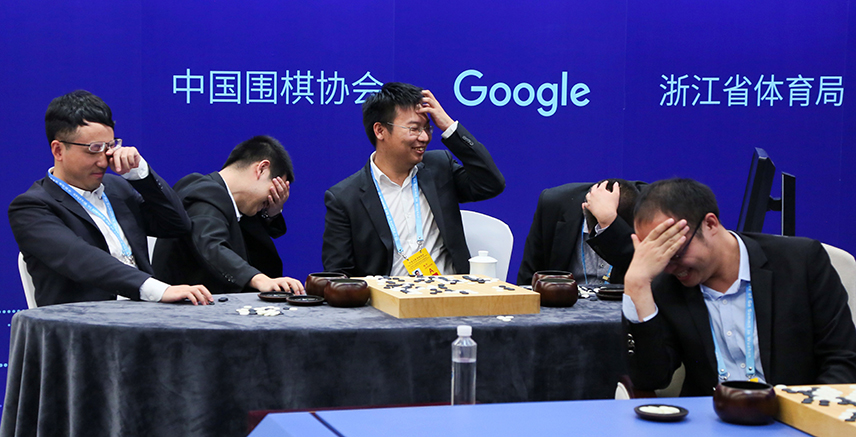 Chinese to use AI against terror

Chinese Go players Chen Yaoye, Shi Yue, Mi Yuting, Tang Weixing, and Zhou Ruiyang react during the match where they form a team of five against Google’s artificial intelligence program AlphaGo, at the Future of Go Summit in Wuzhen, Zhejiang province, China, May 26, 2017

Artificial Intelligence (AI), the holy grail of computer programming and potentially the beginning of the end of the age of men, has made considerable strides in recent years.

In China last week, Meng Jianzhu, the head of the Central Commission for Political and Legal Affairs of the Communist Party of China, stated that the government intends to use AI to proactively counteract terrorist plans and stop them before they take place.

By monitoring the avalanche of data that the internet provides, the Chinese security apparatus is trying to devise a system that can automatically identify potential terror threats, basing it on a pattern recognition model structured on data recorded from previous terror attacks.

The software will be able to learn, adapt, and model potential threats to suggest the best course of action for authorities under certain conditions.

The Chinese government is in a particularly advantageous position in this field, being able to draw on a vast pool of data taken from its millions of citizens.

The main reason for this is that there are virtually no data protection laws there.

Xinjiang, China’s Western province bordering Mongolia, Tajikistan, Kazakhstan, Kyrgyzstan, and Pakistan, is seen by the regime as the best candidate for testing the system.

Home to a majority Muslim Uyghur population, who are discriminated against by the officially atheist Chinese administration, the region has also served as the base of various terrorist organizations over recent decades.
The infrastructure for directly monitoring citizens’ data is already firmly in place; in July 2017, authorities mandated that everyone in the region using Android mobile phones install an app called CleanWebGuard.

This innocuous-sounding application allows the government to scrutinize users’ phones for terrorism-related content, including audio, video, religious content, images, e-books, or documents, and to delete any documents considered subversive. It also allows authorities to track the geographic position of any user in possession of such content.

The use of the app is mandated by law.

Elsewhere, in the city of Shanghai, facial recognition technology is reportedly already in use in traffic camera streams to identify citizens caught on camera committing violations of traffic law. According to Meng Jianzhu, efforts are in place to integrate the country’s entire surveillance infrastructure data streams and to use that information to counter criminal activity.

Money will not be an issue either, as the State Council recently announced a state budget of 150 billion yuan (USD22.8 billion) to be used in the development of AI technologies by 2020, and 400 billion yuan by 2025.

China is, however, not alone in using AI to fight terror organizations. On the other end of the spectrum, social networks are also working hard to filter through all recorded data to be able to restrict the dissemination of terror propaganda.

In June, Facebook revealed some details about the intricate system it uses to prevent messages supporting terrorist groups from being spread on its platform.

According to “hard questions,” a post signed by Monika Bickert, Director of Global Policy Management, and Brian Fishman, Counterterrorism Policy Manager at Facebook, the company has already been experimenting with AI to allow computers to automatically read, understand, and prevent the publication of content advocating terrorism.

Twitter, LinkedIn, and other platforms are likely to follow these attempts. As life catches up with science fiction at breakneck speed, we can only hope that someone somewhere is not already working on Skynet. The future, it seems, is Nye!