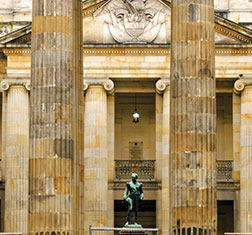 FARC and Colombia after the referendum

Share on:
On October 2 Colombia rejected a peace deal with the FARC, pushing the two sides back to the negotiating table.

Even in a year in which popular votes have gifted the world Brexit and Trump, the Colombian plebiscite was expected to plop for peace when it went to the ballot box on October 2. With the unequivocal backing of the Obama administration, the Pope, and the local and international business community, what could go wrong? Torrential rains on the Caribbean coast did not help, nor did (premature) white-clad celebrations between President Santos and the FARC leadership. Or bitterness over rumors that controversial FARC commander Timochenko would be a shoe-in for the Nobel Prize, to be announced later this week. No group was more surprised, however, than Colombia’s business community. After decades of conflict, the prospect of peace had risen hopes of increased FDI and the opening up of previously undeveloped parts of the country.

The “Yes” vote was overwhelming backed by the business and investment community. Though no one predicted that violence would end over night, TBY’s Business Confidence Index, published in The Business Year: Colombia 2016 and which analyzes the sentiment of the hundreds of industry leaders we interview, showed that the majority were optimistic about the prospects of peace, especially in the energy, IT and telecoms, and agricultural sectors. Not only would the peace accord have greatly boosted the country’s image, they predicted, it would have continued the process of opening up new areas of the country for development.

When it comes to analyzing what went wrong, a better place to look might be the actual accord—and resentment at what many saw as too sweet a deal for the FARC. What was merciful farsightedness for many was criminal leniency for others: by granting amnesty to those who admit to crimes committed during the conflict (and merely imposing sentences of up to eight years of community service), the vote came to represent the sacrifice of justice at the altar of peace: an offering that half the country didn’t think worth making.

Nor was amnesty the only thing at stake: the deal would also have allowed members of the FARC to form a legalized political party and run for public office. The last time this happened, in the late 1980s and early 1990s, the FARC-inspired Unión Patriótica (Patriotic Union) saw its candidates and followers murdered by the thousand. Thus their (re)insertion into peaceful, national political life was never going to be easy.

The business community is now looking beyond the referendum. Speaking with TBY in an interview post poll, Carlos Sarmiento Gutiérrez, CEO of Grupo Aval, conveyed that, “I am confident that people will soon realize that the end result of what happened last Sunday is that Colombia will end up negotiating a better deal supported by the vast majority of its population. Without a doubt that deal will be better for investor confidence and for the country in the long run.”

Yet Sunday’s vote also hugged the political fault-lines that have divided the country in recent years—and was almost identical to the regional differences that split the 2014 presidential elections. That year, the (largely Afro-Colombian) northern and western coasts, in addition to large swathes of Bogota, voted en masse for Santos, while the cattle-ranching hinterland around Medellin (Antioquia) and the heavily populated provinces of Cundinamarca, Tolima, Santander, Norte de Santander and Huila—all of which were heavily marked by FARC violence in the late 1990s and early 2000s—went for former president Uribe. Nonetheless, FARC is far more powerful in the regions that voted “Yes.”

In a sense, this should come as no surprise. While the FARC have committed all manner of atrocities in their biggest zones of influence—from forced recruitment to church bombings—it is these rural, deeply underdeveloped, and heavily Afro-Colombian and indigenous areas from which they spring and hope to one day (soon) represent. Despite countless crimes against them, it is from these communities they can expect to be more readily forgiven—if not seventy times, then at least seven.

Then again, it also these rural inhabitants have more to gain from peace. Not so in the cities and more prosperous areas that fell under the FARC’s fire in recent decades but have now been pacified by the state. As one senator in the conservative Centro Democrático party aptly put it: “The day they are behind bars I will go and give them my hand and forgive them.”

So what do FARC or the government intend to do about the collapse of the deal? Ever confident a week ago, President Santos nearly boasted that he “had no Plan B.” The FARC, for its part, insists it still wants peace. In the words of its leader, Rodrigo Londoño, nom de guerre Timochenko, it “reiterates its disposition to use only words as a weapon to build toward the future. To the Colombian people who dream of peace, count on us, peace will triumph.”

And despite this setback, the business community will continue to follow the talks with more than a keen ear. A young but comparatively scarcely populated country twice the size of France, straddling both the Pacific and Atlantic oceans, and bursting with natural resources, Colombia also poses huge greenfield opportunities in mining, construction, tourism and infrastructure. Whatever the terms of an eventual peace, it cannot come soon enough.

The one bright side of the long and drawn-out negotiations is that political violence is at its lowest in years: throughout the entire month of September, not a single act of violence was attributed to the FARC in the entirety of Colombia. The rebels, it would seem, are losing their taste for violence. If the business community could have its say, soon they will lose the prerogative.