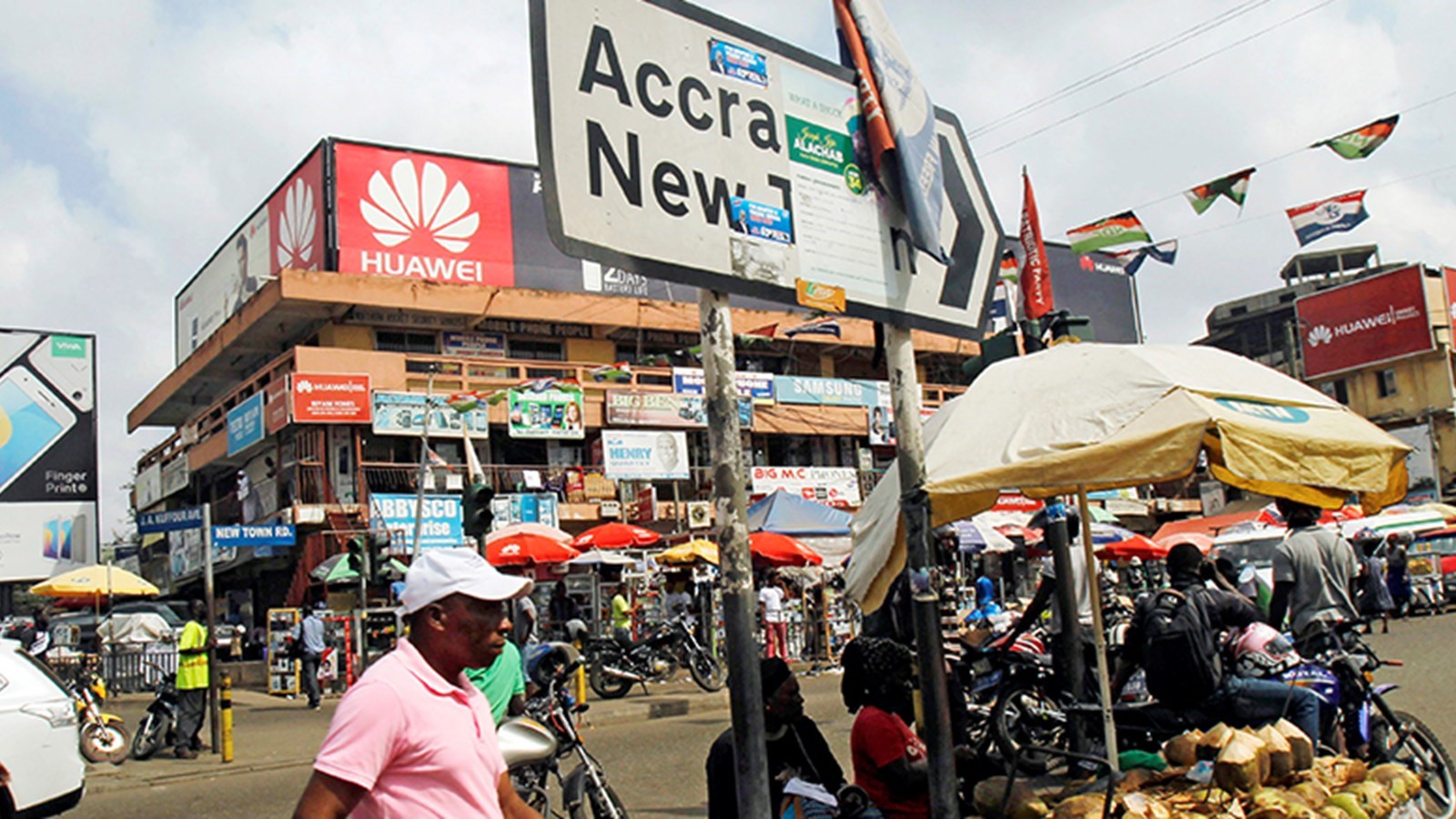 Share on:
Sometimes, that light at the end of a tunnel is a train.

People walk on the street around Kwame Nkrumah circle in Accra, Ghana, December 2, 2016

When the New Patriotic Party was elected to power in December 2016, the party’s platform was one of economic prosperity, fixing the country’s foreign exchange rate and reducing unemployment. The incumbent, John Mahama, had presided over a period of falling oil and commodity prices, with the country’s treasury receiving ever-decreasing returns on its gold, oil, and cocoa bean exports. With the people fed up with electricity shortages, currency troubles, and disappointed by the country having to reach out to the IMF, cap in hand.

The head of the New Patriotic Party, Nana Akufo-Addo, proposed a rather ambitious, eyebrow-raising solution to this economic malaise: factories. In the summer of 2016, six months ahead of the election, he told the country he would bring a factory to every district.

The one problem of course, is that successful factories require sturdy infrastructure, not like Ghana’s poorly maintained railways and choked roads.

To be fair, the planned infrastructure had been in the bureaucratic pipeline for years, but Mahama’s administration simply drew attention to it. These projects included the Greater Accra Regional Hospital, funded by a USD155 million loan from the US Export-Import Bank, and a multitude of road, railway, and port programs.

For voters, however, it was too little too late, and with Akufo-Addo’s party promising even more investment in infrastructure, and most importantly job creation, the New Patriotic Party was sworn in on 7 January, 2017.

Because the new government’s plans to build a factory in every state first require that the necessary transport infrastructure is put in place, in this case railway infrastructure.

Senior Minister Yaw Osafo Maafo spoke to TBY at the Invest in Ghana Summit earlier this year, explaining that for “develop[ing] our bauxite reserves, we need railway infrastructure, therefore the development of our railways is a link to the industrial development of bauxite in Ghana.”

The plan to establish inland rail terminals is expected to cultivate new industrial estates, and create new centers of commerce away for the traditional trade hubs.

Putting his money where his mouth is, President Nana Addo Dankwa Akufo-Addo created the Ministry of Railways Development in February 2017, tasking it with the development of a modern railway network.

The Senior Minister explained that “we created the position of Minister of Railways Development because of the sheer size of the investment we want to put into the railway system. The railways are inextricably linked to our industrial development, as well as providing an outlet for our landlocked neighbors. We want to go beyond railway for industry. We are competing with all of West Africa, and we have to have the harbor and rail infrastructure to do that.”

The plan for the railway is not just to connect the major cities of Accra, Kumasi, Sekondi-Takoradi, and Tamale, but to transport goods from landlocked countries north of Ghana, such as Burkina Faso, to the ports of Tema and Takoradi. These are currently undergoing some substantial upgrades to boost both import and export capacity. The new rail infrastructure will stretch across the country, from the southern ports of Tema and Takoradi, up to the northern border town of Paga.

Historically, the railway system in Ghana has been confined to the plains below the mountains above the city of Kumasi. There are currently three lines forming a triangle between Accra, Kumasi, and Takoradi. The lines were built over a century ago during the colonial period, primarily to transport gold from Tarkwa to Sekondi on the coast in 1901. This line was then extended to Kumasi, the capital of Ashanti in 1903, and 20 years later the route from Kumasi to Accra, the seat of government, was completed. When Takoradi Harbor, four miles southwest of Sekondi, was opened, large vessels were able to berth and ship the manganese, cocoa, and timber brought by railways from the interior.

Today, however, only 13% of the 947km of track that was there in 1957 is operational – a sad reflection on a network which was once seen as one of the best railways systems on the continent.

The Ghana Railway Master Plan was completed in 2013, and proposes a new network that would quadruple the current infrastructure to a 4,008km-long standard-gauge network (the current rail is only single gauge tracks). According to the master plan, the construction will be broken down into six phases, culminating in a web of railways that stretches across the country, with stations connecting mineral resources to urban centers and new industrial areas.

Given that the total sum of building the infrastructure in the masterplan is an eye-watering USD21.5 billion, the Afuko-Addo government has selected three aspects of these phases to prioritise and complete between July 2016 and June 2020. These are Phase 2 and parts of Phase 3 of the master plan, which amount to a more palatable USD7.8 billion.

Phase 2: This is the largest and most vital element of the master plan, creating a central spinal cord of rail, linking Ghana’s two coastal cities with the northern border. The new standard gauge rail will start with two branches from Takoradi to Kumasi and Accra to Kumasi, from where one line will then extend north from Kumasi to Paga near the border with Burkina Faso, linking the coast to the interior for the first time in history.

Unsurprisingly, there are resources along the way. On the side of this eastern line from Accra to Kumasi is the town of Kibi, which has bauxite deposits of 180 million tons. A proposed inland rail terminal, Boankra Inland Port, also lies on this line. The central spine line between Kumasi and Paga will be 595km in length. The Ministry of Railways Development estimated that this line would cost a total of USD3.3 billion to construct.

Phase 3: According to the masterplan, phase three is a set of lines branching off the central spinal line heading north. The lines that have been included in the priority projects are the Kumasi – Nyinahin Line (58km), and the Tamale-Yendi Line (102km).

In total, the priority projects are for five lines:

Opportunities for the private sector

For construction contractors, machinery suppliers, and transport manufacturers, there are extensive opportunities to be had. The government has repeatedly said that its open to private sector involvement for the provision of related services and the development of the railway network. For local industrial manufacturers such as Reroy Cables, as CEO Kate Quartey-Papafio explained to us back in 2016, “the world is moving on. We used to do telephone cables, but the demand for that is dwindling so now we moving into the fiber-optic market.” The company provided the steel wire ropes for the port developments at Tema, and will be looking to supply the new rail network with its locally produced wires and cabling.

For other companies too, the prospect of a rail network would significantly reduce export and import costs, taking a heavy burden off Ghana’s already congested roads. For example, the Ghana Manganesese Mine at Nsaut is 64 km from the port of Takoradi, and typically transports goods by road and the single gauge rail.

Likewise, there is a bauxite mine at Awaso, 239km from Takoradi, which is transporting all of its bauxite by road to the port. With an estimated 150 million tons of iron ore reserve along the Western Line that is yet to be exploited at Opon Manso, the prospect of this infrastructure represents a significant overhead reduction for mining companies.

Nonetheless, Ghana is not the easiest place in the world to do business, ranking 108 out of 190 in the World Bank report. And given that the country ranked 154 in the ‘Trading Across Borders’ ranking and 117 in the ‘Dealing with Construction Permits’ category, it clearly has some way to go. When asked about incentives for the private sector, Minister Yaw Osafo Maafo explained to our managing editor that the government’s first budget has reduced 15 taxes that were described as “useless,” which put GHC1 billion into the business sector to enable smaller players to expand their businesses. The administration is still engaged in tax reform studies, “We are very clear about our ambition to remove as many upfront costs as possible for investors and for businesses. Investment is competitive, so we must create a conducive environment for investors. Our president has given us a clear mandate, Ghana has to be the best place to invest in.”

One factory one district

With 216 districts in the country, a total of 216 factories are expected to be set up across the country under this new plan. Each factory will not only help ameliorate current unemployment figures, but will also bolster GDP. According to the plan, at least 51 factories are expected to come on stream in 2017, requiring a total investment, inclusive of both debt and equity from both the private and public sectors, of about USD110 million.

This is expected to generate some 300,000 jobs and contribute about USD236 million to Ghana’s GDP. The second phase will be carried out over the following two years, 2018 and 2019. This will involve the establishment of between 100 and 120 enterprises, which will require investment of some USD140 million a year for each of the two years. Expectedly, these will generate about 1.2 million jobs over the two year period and will contribute some USD944 million to Ghana’s GDP.

The initiative is designed to decentralize industrial development and create a more spatial spread of industrial development. The end result will be a reduced reliance on commodity prices, and should help provide employment outside of the traditional centers of commerce like Accra, Takoradi, and Kumasi, which have been draining the more remote districts of their young people.

The government has promised to facilitate and assist medium to large-scale businesses in return for an equity interest. Combined with a growing rail network, the country needs all of the ingredients to come together to make this recipe work for the country.