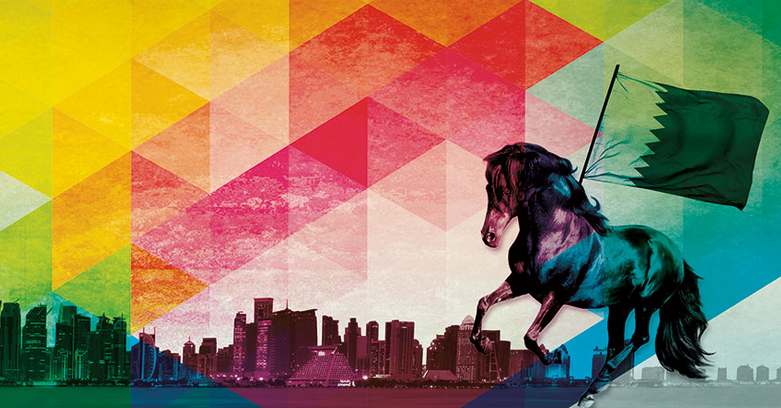 Near Far Wherever You Are

Share on:
Qatar has formed a bevy of strong relationships with Asian countries that give it a stable export base and a source of important technological experience as it looks to diversify and develop a knowledge-based economy.

Qatar has had an eventful go of it recently, even by the standards of the Middle East. Though committed to a vision of the future that involves regional cooperation in pursuit of a more stable and prosperous future for the Arabian Peninsula, the past year has brought a host of unexpected obstacles that have challenged the cohesion and unity of the region. Yet while regional tensions have flared, Qatar’s role on the larger global stage continues to grow thanks to a government dedicated to forging new roads for commerce and investment and a corresponding stable of trade agreements. And all the while the 2022 FIFA World Cup remains on the horizon; construction work is well underway, and the government knows that the arrival of the world’s largest sporting event will mark a major shift in Qatar’s global standing.

Qatar was a founding member of the GCC, a regional organization that coordinates economic and political issues concerning the members of the Arabia Peninsula. Formally composed of Bahrain, Kuwait, Oman, Saudi Arabia, and the UAE, the GCC includes some of the world’s fastest-growing economies; the region’s massive oil and natural gas reserves have resulted in tremendous economic growth since the GCC’s 1981 founding. Well aware of the importance that organizations like the GCC have on regional stability and economic growth, Qatar has led calls for increased coordination within the GCC. The Qatar National Vision 2030—a wide-ranging blueprint for national development—calls for Qatar to “continue to build upon its role in the international community” by taking an increased economic, political, and cultural role within the GCC. The council’s countries share many key goals when it comes to economic diversification, increased tourism, and energy coordination, so Qatar’s aims are a natural continuation of what is best for all involved.

Unfortunately, political tensions have sometimes intervened. In part it is due to the paradoxical nature of intragroup conflict: though the members of the GCC share almost all primary goals, the few differences of opinion that occur are magnified in scale. For Qatar, this means that its political and economic relationships with Iran can sometimes lead to conflict with Saudi Arabia and the UAE, which have long sought to enforce their political influence upon the region and see Iran as a threat to the unity of the GCC. These tensions have flared before, notably in 2014, when Saudi Arabia and the UAE withdrew their ambassadors to Qatar, but 2017 brought the most notable rift yet when Saudi Arabia, the UAE, Bahrain, and Egypt cut all diplomatic and economic ties with Qatar. The Saudi-led coalition gave Qatari nationals 14 days to leave their countries and initiated an economic blockade that resulted in the closing of Qatar’s only land border.

The move, which came as a surprise to the global community, created a host of economic issues for Qatar: its planes were blocked from neighboring countries’ airspace, it lost a major source of agricultural imports, and construction on World Cup sites was slowed as firms were forced to find alternate sources of materials. More importantly for the long-term future of the region, though, the diplomatic rift exposed still-unresolved tensions and created a situation where several of the Middle East’s largest and most important countries were pitted against each other. Turkey and Iran condemned the blockade while larger international powers called for dialog amidst the heated language on both sides. Part of what made the rift between the countries so complex is that all parties involved saw their actions as working to create a more unified and stable region; Saudi Arabia wanted Qatar to move in concert with the rest of the GCC, while Qatar saw fostering dialogue with Iran and Turkey as beneficial to continued stability in the region.

Complicating the situation is the fact that Qatar and Saudi Arabia are also members of OPEC. Though natural gas is Qatar’s primary export product, it is home to an estimated 8.3% of known oil reserves and exported USD22 billion worth of petroleum products in 2016. Qatar’s LNG wealth helped mitigate the financial effects of the fall in oil prices; after reaching historic highs during the first decade of the new millennium, prices began dropping in 2014 and reached their lowest point in more than a decade in 2016. Although Saudi Arabia initially persuaded the organization to avoid production cuts, OPEC and 11 non-members agreed to cut production by 1.8 million bpd in November 2016. After prices stabilized, the organization agreed to extend those cuts into 2018. As a smaller producer, the cuts call for Qatar to reduce production by 30,000bpd, a target it has thus far been meeting through May 2017. “Qatar has played an important role, as have all participating nations,” OPEC Secretary-General Mohammed Sanusi Barkindo, told TBY. “To date, conformity with the decisions has been good.” The larger geopolitical issues affecting key oil producers have created an environment in which the cohesiveness and unity of the organization might be threatened. OPEC is no stranger to diplomatic tiffs between member countries, but the increased tensions come at a time when economic and political unity is of the utmost importance.

A look to the wider world beyond the Middle East demonstrates the strong connections that Qatar will look to draw upon as it continues to develop for the future. Asia, for example, has become an increasingly more important part of the Qatari economy due to its ideal location for LNG shipments. According to GIIGNI, 52.7 million tons of Qatar’s 79.6 million tons of LNG exports went to Asian markets, while 17.9 million tons went to European destinations. Japan has become Qatar’s single-largest export partner and the final destination of almost 20% of Qatar’s LNG exports. As such, Qatar has been actively developing its diplomatic relationships with key Asian partners. Japanese PM Shinzo Abe led a delegation of business leaders to visit Qatar in 2013, signing a series of bilateral and trade agreements and pledging to contribute technical and investment support to Qatar’s modernization efforts. In addition, Qatar’s Electricity and Water Company (QEWC), along with Japan’s Chubu Electric Power Company, have a formal partnership project that promotes the exchange of human resources and the joint development of solar technologies. Qatar’s longstanding relationship with Chubu, which was the first firm to receive Qatari LNG exports when trade began in 1997, is an example of how it can build upon its natural resources to develop the framework for the economic diversification called for in Vision 2030.

A similar dynamic is under way in South Korea, Qatar’s second-largest destination for LNG exports. The two countries held a bilateral summit in Doha at which Korea signed MoUs recognizing opportunities to participate in more USD29 billion worth of construction and technology infrastructure, while Qatar pledged to make significant investments in the Korean economy using its sovereign

wealth fund. IT, medical services, and transportation were three other areas of emphasis, and all are in keeping with Qatar’s long-term goals of developing a knowledge-based economy. Kogas, Korea’s state-owned natural gas utility and the single largest importer of LNG in the world, has export agreements with Qatari firms that call for it to receive more around 9 million tons of LNG per year through 2032. As with Japan, the complementary elements of the two countries’ economies make bilateral relations a natural fit. South Korea’s expertise in technological innovation has the potential to help Qatar develop more robust ecosystems across a number of industries, including urban agriculture, tech development, and construction, while Qatar’s natural resources and willingness to invest generates positive returns for one of the world’s most successful knowledge-based economies.

One area where Qatar expects to work closely with South Korean firms is in preparing for the 2022 FIFA World Cup, which is expected to generate more than USD100 billion in construction contracts. Since its 2010 selection as the first Middle Eastern Country to host the World Cup, the event has become one of Qatar’s economic and diplomatic pillars. The opportunity to host the world’s most popular sporting event gives Qatar a unique opportunity to showcase the international relationships that have helped it grow so successfully in recent years. With more than a million international visitors expected to arrive for the event, the logistical and diplomatic coordination required has given Qatar plenty to work on over the past few years. The nation has drawn upon its extensive international trade networks to design and construct the stadiums and transportation facilities needed for the World Cup, awarding contracts to South Korean and British architecture firms for the design of key stadiums and working with a wide range of contractors to complete various infrastructure projects.

Qatar has used its connections to win support from international trade partners excited to be a part of one of the world’s largest construction projects and regional neighbors eager to show off the development of the Middle East. Turkish President Recep Tayyip Erdoğan gave a sense of this regional pride when he told TBY, “We are ready to provide all kinds of support to Qatar on its path to the 2022 FIFA World Cup, which will be the first time this event has been organized in a Muslim country. We were pleased to see a Turkish company awarded as one of the main contractors of Al Thumama Stadium. I am sure that Turkish contractors will continue to do important work in the Gulf region.” Confidence in Qatar’s ability to host was such that a FIFA official reported that the blockade had no effect on World Cup hosting plans.