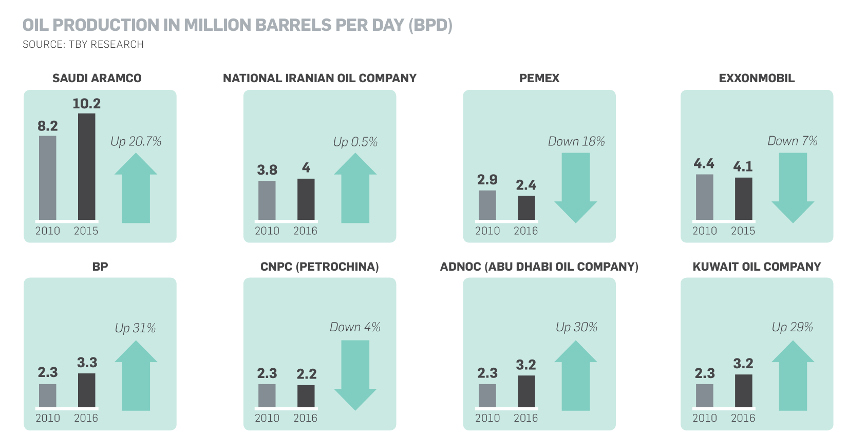 Share on:
How much did the largest oil companies increase or decrease their production in the last five years?

Crude oil Brent price for September cost $46, half its value as compared to 2014 when it stood at around $100. Weaker Chinese and developing countries ‘economies and a sluggish growth in Europe are the main factors that have caused a decline in demand. On the other hand, oil production has dramatically increased since 2010 as firms invested heavily in E&P activities.

The US has nearly doubled its output, whereas OPEC nations rose from 30.5 million bpd to 35.35 million bpd between January 2010 and 2016. Consequently, most of the largest oil companies in the world have hiked production, although some big firms experienced a reduction amid the turmoil.

The Gulf states, which account for the largest oil reserves in the world, pump out today more crude than five years ago. Saudi Aramco, the biggest oil producer, increased production by nearly 20%, whereas ADNOC (Abu Dhabi National Oil Company) and Kuwait Oil company rose around 30% each. Also in the Middle East, the National Iranian Oil Company barely boosted oil output, as US and international sanctions hammered its crude exports.

Among the largest public companies, ExxonMobil and Royal Dutch Shell registered a slim fall, as low oil prices have led to budget cuts in upstream activities and, thus, have halted exploration programs. Exploration is paramount for companies to add new discoveries and maintain or increase production levels.

In the meantime, BP’s oil production surged 31% between 2010 and 2015. Nevertheless, that impressive growth is largely due to the fact that weak results in 2010 were caused by the Gulf of Mexico oil spill, after which BP had to sell assets and restructure.

In Latin America results were mixed. The Mexican company Pemex production has waned steadily, whereas Petroleos de Venezuela almost maintained the same production figures as five years ago. However, Petrobras managed to expand output by nearly 25% up to 2.6 million despite the instability that the country and the company are experiencing, even though the Brazilian firm fell short to meet its 5.4 million bpd goal by 2015.