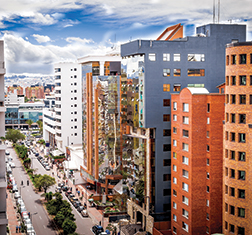 Share on:
Since 2007, property markets in Ecuador's urban centers appreciated at a rate of around 10% before slowing down towards the end of 2013. By 2014, rates were still rising.

Ecuador is frequently touted as the perfect destination for foreign homebuyers looking to retire, thanks to its low property prices and cost of living, and even the impressive appreciation of homes and overall economic development of the last decade have not changed this.

Over the past decade, real estate prices have been pushed upwards by a series of factors. Economic growth has been strong, especially prior to the slump in oil prices. Ecuador was especially well positioned to benefit from the latest commodities supercycle and the government of President Rafael Correa was equally liberal with its social programs, many of which were structured to house as many of the country’s lower income population in formal residences as possible.

Urbanization is also a boon for real estate in Ecuador. Since 1990, the country’s urban population has increased by an average rate of 2.7%. By 2010, 67% of the population lived in towns.

Construction remains strong in the commercial real estate sub-sector as well. Hotels in particular are looking to capitalize on the country’s growing reputation as a tourism destination, as well as on business travel to major cities. During the 2014 South American Hotel Investment Conference (SAHIC) in Quito, over $87 million in new hotel investment in the capital was announced. In 2013, 25% of all visitors to Quito arrived for business tourism. In recognition of this demand, the Metropolitan District of Quito has started an ambitious urban development project. This project, called the Bicentennial Plan, envisions a new urban center that will include a convention center and business tourism facilities. Located on the site of the old airport, construction is already underway, and hotel chains and service industry players have already signed on. By its completion, the project is expected to attract $675 million in investment.

Besides the obvious boom in construction in Quito and Guayaquil, the two cities in the country with populations over one million, Cuenca and Manta have also seen building booms over the last decade. Over the last decade, improved access to mortgages has driven up purchases of flats in urban centers by private citizens. Meanwhile, large firms have helped to their employees with home purchases close the place of work. Another trend has been a growing number of multinationals establishing themselves in the country, and they in turn have empowered locals and expats alike with home purchases and apartment rentals.

Prior to the Correa administration, Ecuador had already implemented the Housing Incentive System—Sistema de Incentivos para la Vivienda (SIV), which ran through 2005. The program concentrated on building new low-income housing, and on improving existing residencies. While the latter half of the program funded repairs on homes for lower-income groups, the former targeted new home buyers who were predominantly middle-income. Within the new-housing component, a voucher known as the Bono para Vivienda Urbana Nueva covered up to 75% of the value of new construction, with a maximum subsidy of $1,800. The differences between construction costs and incentives were arranged through favorable mortgage programs that were successful in jumpstarting the national housing market, and set the stage for the housing boom that occurred in the years following the program.

Added to this, Ecuador has made a concerted effort to lure its expatriate community back to the country. The Correa administration realized that this diaspora represented one of the most productive and educated segments of Ecuadorian society, and provided incentives for their return. Ecuadorians are the largest Latin American nationality in Spain, the second largest in Italy, and are also one of the largest immigrant groups in the metropolitan New York area.

Not only was the repatriation program successful with Ecuadorians, but it has attracted tens of thousands of other immigrants, many of whom have set up businesses and purchased homes. And with a relatively small population and a welcoming disposition, Ecuador is benefiting from this influx. One large group of foreign-national arrivals hails from the US, and these immigrants are in the market for retirement homes and looking to spend their final years taking advantage of the country’s low cost of living and pleasant environment. After International Living Magazine’s “Global Retirement Index” named Cuenca as the top spot to retire in 2009, it set off a wave of migration that some have nicknamed the “gringo invasion.”

It is important not to overestimate the contributions of US retirees however, as local buyers and repatriates are far more important in dollar terms, using Cuenca as an example. In recent years, returning Ecuadorians accounted for around 30% of all local sales in Cuenca, while North Americans and Europeans accounted for only 1.5%. Other cities have similar figures. Moreover, foreign buyers usually buy condominiums located near the city center, or just outside of Cuenca historic district.

Two other developments are combining to make the real estate market one of the country’s most dynamic sectors, and allowing it to continue to outperform other sectors and the national economy in general. The first is a boost in spending on housing programs by the state. A program unveiled in April 2015 is aimed at boosting the economy through a social housing program that will be carried out through PPPs. To promote home sales, the government is holding interest rates at an artificially low level for home loans up to $70,000. At the same time, incentives are being provided to real estate companies and financial institutions.

President Correa explained that the IESS Bank would lend at 6%, without warranty, and that private banks would charge a 4.99% rate, with the support of the state which would provide a 5% warranty. Furthermore, housing bonds of up to $40,000 on the demand side have an established 5% credit rate from the Bank of the State and National Financial Corporation.

Ecuador’s Ministry of Economic Policies has stated that these credits, which previously were disbursed by private banks at a rate of 10% for a 15 year term will change. Under the new conditions, a housing credit will have up to a 4.99% interest for a 20 year period, with a 5% warranty. In many cases, lending real rates were higher prior to this decision. In mid-2014 for example, the effective lending rate for home buyers stood at 10.64%, and was unchanged from the previous two years, according to the Banco Central del Ecuador.

These conditions are not universal, and the maximum cost per sqm may not exceed $890 dollars to qualify, precluding higher-end properties in urban centers and on beach fronts. However in middle-class and poorer neighborhoods, this announcement is set to drive up the volume of business in the real estate sector. A spokesperson for the Ministry also added that mortgage rates under the new plan for a $70,000 house would fall by $213 per month to $462. By shaving off nearly 30% on mortgage rates, many renters are expected to transition to home ownership in the coming years. Meanwhile, the ministry anticipates that lending to homebuyers will reach $420 million this year.

Another repercussion of falling commodity prices is an overall shift in national investment patterns. In line with state incentives for new housing development, the private sector is moving into what is seen as one of the more stable areas for investment in the medium term. This process is not always voluntary, and the government has already invoked a law approved by Congress in 2014 to force the country’s eight largest banks, including publicly-traded Banco de Guayaquil SA and Banco Pichincha CA, to provide about $86 million in mortgages in 2Q2015. Conditions are fluid, and lending requirements are being reviewed on a quarterly basis, and are subject to change.

Global Property Guide averaged the per-sqm prices of 120sqm apartments located in the center of the most important cities of selected countries throughout Latin America and only El Salvador offered lower prices. Ecuador was a close second in pricing at $1,278 per sqm. Meanwhile, Costa Rica registered $1,624 per sqm, Panama was $2,001, and Brazil topped off the list at $3,751. With economic growth expected to slow to 1.3% in 2015, before picking up to 2.2% in 2016, it is unlikely that Ecuador will shift much in this lineup, and its urban property market will remain a bargain.

Indications that the market was cooling off first appeared in Quito in 2013, when price increases started tapering off. In Cuenca, property sales stayed hot through 2014, and saw an average increase in house prices of between 8-12% annually over the past five years, according to Cuenca Real Estate. For condominium units, registered house prices rose between 10-12%. However even there, house price increases decelerated to single-digits in 2013, where new condos sold for between $975 and $1,250 per sqm.

In more detail, new two-bedroom apartments with tile and wood finishing were priced between $75,000 and $90,000. New three-bedroom apartments with a 2-bath unit in prime locations sold from $95,000 to $120,000. In the larger-home market, a 3,000 to 5,000 sqf house in Cuenca’s upscale neighborhoods was priced at around $275,000. And while prices like these would be considered a bargain in almost any advanced economy, when considered against national economic indicators, they fall into the price range of mostly economic elites, returning expatriates, and foreign buyers. In 2014, per capita GDP was $6,273 for a population of just over 16 million.

In Cuenca, a downward pressure on prices of new units is underway due to a large inventory of unsold properties and a fewer Ecuadorians returning from abroad. This trend does not suggest that a US-style real estate “bubble” is forming however. With standard down payments at 30% on mortgaged properties and more than half of all real estate sales in the Cuenca canton being mortgages free, developers and real estate agents remain optimistic about the market.