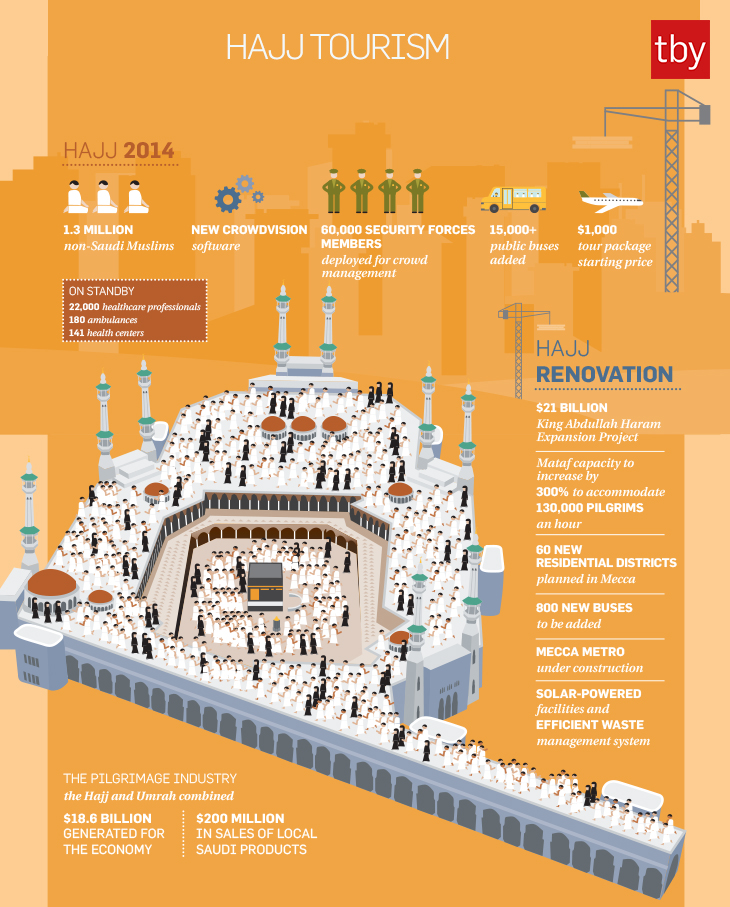 Once in a Lifetime

Share on:
The annual pilgrimage to Mecca by Muslims is seeing reduced numbers at the moment as the area undergoes massive renovation and upgrading; however, it is still an extremely lucrative industry.

One of the five pillars of Islam, the Hajj, is an annual pilgrimage to Mecca that every physically and financially capable Muslim is expected to make at least once in their lifetime. With an estimated 1.6 billion Muslims worldwide, the Hajj is considered one of the largest gatherings of people in the world. To handle the sheer quantity of people, a massive Hajj industry has developed to safely house, transport, and feed the millions of annual pilgrims. Particularly around Jeddah, Medina, and Mecca, the annual Hajj is already a huge economic boon, with significant potential for growth.

In 2014, over 1.3 million non-Saudi Muslims completed the Hajj, which is a reduced number compared to previous years due to the extensive construction work on going in and around Mecca. Combined with Umrah, the pilgrimage to Mecca outside of the specified month of Dhu Al-Hijjah, the pilgrimage industry accounted for over $18.6 billion, making it one of Saudi Arabia’s most important sectors after oil. The pilgrimages draw over $200 million in sales of locally produced Saudi products alone.

To handle such large crowds, especially after catastrophic stampede incidents in 1990 and 2006, the authorities employ the latest technology and crowd control practices to ensure the safety of the pilgrimage. During 2014’s Hajj, the government employed the crowd analytic software CrowdVision to stop potential trouble areas in the crowds before they can develop into more serious problems. Thousands of face-recognition CCTV cameras were installed, aiding the 60,000 security forces managing the event. Over 15,000 public buses were added during this time to ease transportation congestion. Health concerns are always present with such large numbers; however, health officials for last year’s Hajj were particularly anxious due to regional and global health crises, such as MERS and Ebola. Over 22,000 healthcare professionals, 180 ambulances, and 141 health centers were on standby.

Controlling access to the Hajj is done through a strict visa regime, where each tour operator is issued a certain amount for the coming Hajj season. Additionally, each pilgrim can only undertake the Hajj through one of the thousands of officially licensed Hajj operators. With the recent trend in luxury Hajj travel and five-star hotels, the average price of Hajj packages continues to climb. In 2014, the most affordable tour packages started at $1,000.

While the Hajj of today is a far cry from the rigorous journey of the past, the relatively recent developments in Hajj infrastructure and services easing the trip are just the beginning. Over $20 billion are already committed to construction or expansion projects in Mecca, and the government recently revealed a 25-year plan regarding the future of developments along the pilgrimage path.

The capacity of the mataf—the area around the Kaaba—and the masa’a—the ritual path between the mounts of Safa and Marwa—will eventually reach 130,000 pilgrims an hour, or a 300% increase of the current capacity. In addition to the seemingly countless five-star hotels and towers rising up around Mecca, over 60 residential districts are also planned. The public transportation system will also be revamped in 2016, with 800 new full-time buses, as well as the three-line Mecca Metro, which is currently under construction, will eventually cover 183 km via 88 stations.

With 13 million pounds of waste produced during the Hajj, sustainability is also a major focus for government officials for the future development of Mecca. Efforts to transform Mecca into a “Smart City” include solar-powered facilities and green residential projects, among other ways to more efficiently manage waste.

According to Maher Saleh Jamal, Chairman of the Mecca Chamber of Commerce and Industry, 2015 may be the last year with reduced pilgrim numbers due to the ongoing construction projects. Even so, he has predicted that there may be around 7 million over the next two to three years.