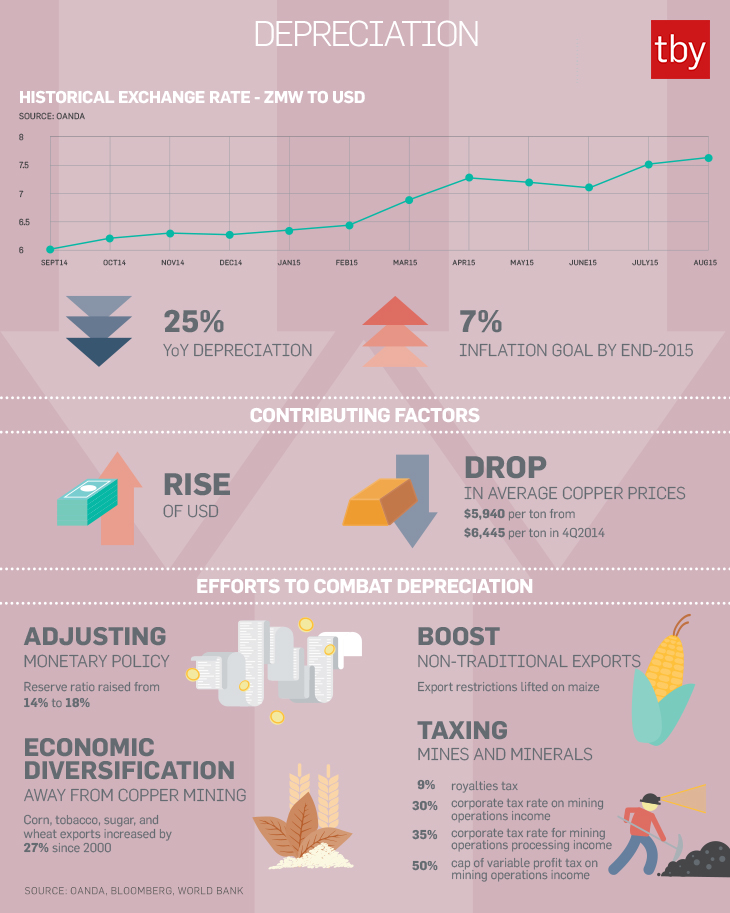 Share on:
The Zambian kwacha has depreciated by 25% in the past 12 months. The government is taking some effective measures to counter this.

Over the past year, Zambia has seen a depreciation of 25% in its currency, the kwacha. The government, particularly the Bank of Zambia (BOZ), is utilizing multiple approaches to combat this trend. Of these measures, the most prominent has been Zambia’s desire to diversify its economy away from being dependent upon copper. According to the Observatory of Economic Complexity, the mineral accounts for roughly 73% of all exports from the African nation (Simoes 2011). Yet according to the World Bank, exports such as corn, tobacco, sugar, and wheat have increased by 27% since 2000. Even with a diversification plan in place, BOZ still plans to make changes to its mining tax system to stimulate greater foreign revenue. Domestic monetary policy is being adjusted as well to try and alleviate some of the pressure. The BOZ Governor, Dr. Denny Kalyalya, has raised the reserve ratio from 14% to 18% as well as increased lending to the private sector and the Government.

With the rise of the US dollar and a fall in the price of copper, it is unsustainable for Zambia to rely solely on the metal. The BOZ announced in its monetary statement policy that the average price of copper fell to $5,940 per ton from $6,445 per ton in 4Q2014. This price change has created a certain amount of volatility in the kwacha, which can be witnessed in the devaluation of the currency. It has sought to increase the output of nontraditional exports to counteract this and create a more balanced economy.

The Border Management Bill was implemented to assist impoverished laborers who rely on cross border agricultural trade. This bill’s intentions are to reduce costs for farmers to export crops to neighboring countries and move this type of trade into regulated channels to eliminate bribery at border crossings. A World Bank report claims that prior restrictions interfered with the development of the export markets and prevents small farmers and larger ones alike from making long term investments into the industry, such as marketing, storage, and supply. In 2014, the government lifted all export restrictions on maize and plan on maintaining that strategy for the indefinite future, according to Wylbur Simuusa, former Minister of Agriculture and Livestock.

However, Zambia still cannot ignore copper exportation because of its massive influence on the economy. The Mines and Minerals Act was installed in 2008 and Dr. Kalyalya is hoping it will have longterm effects on the stabilization of the kwacha. He has stated to Bloomberg News that new tax increases, including a hike in royalties taxes to 9%, up from the act’s original 3%, but down from a proposed 20%, is meant to stimulate the release of foreign exchanges into the domestic market. To coincide with these intentions they have set the corporate tax rate at 30% on income coming from mining operations, and at 35% for income coming from mining operations processing. Variable profit taxes on income earned from mining operations will be capped at 50%. The issue of capital flight and underreporting of revenues should be curtailed with the help of Statutory Instrument No. 55, which is the legal provision that allows the government to investigate companies’ mining revenues.

Besides the reserve ratio increase, the government decided to maintain its policy rate at 12.5%. This, according to its monetary policy statement has helped inflation decrease from 7.9% to 7.2% in four months. The central bank has also continued borrowing to offset expenditure needs in face of falling copper prices. Hoping to meet Dr. Kalyalya’s inflation goal of 7% by the year’s end is attainable with the end of mining companies’ protestations over tax rates on the industry. With the mining tax impasse coming to an end, coupled with export diversification, and increased tax revenue, the Zambian government is hoping to reinvigorate a stalling economy.