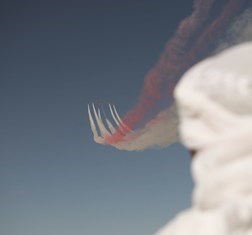 Out of This World

Share on:
Under Abu Dhabi Economic Vision 2030, aerospace and defense are set to play major roles in an economy diversified away from oil. The size and reputation of Abu Dhabi-based companies are soaring.

In line with its strategy of producing and developing high-level technologies, Abu Dhabi is emerging as a global leader in the aerospace industry. A key aspect of the Abu Dhabi Economic Vision 2030 is growing and diversifying the non-oil economy. As such, special emphasis is being placed on creating globally competitive and leading aerospace industry locally.

Set to constitute the core of the industry is the Nibras al Ain Aerospace Park (Nibras), located in Al Ain. Established in 2012 as a joint development by Abu Dhabi Airports Company and Mubadala, a state-owned investment fund, the park has recently finished its first phase and has proved a massive success. When the final phase is completed around 2030, the development will span more than 25sqkm and employ some 10,000 staff.

A mixture of SMEs and major international corporations in the industry have already set up shop at Nibras. The facility consists of several manufacture, repair, and overhaul (MRO) providers as well as an integrated pilot training academy. Phases II and III, work on which began in 2017, are focusing on developing critical infrastructure and attracting more SMEs, industry suppliers, and original equipment manufacturers, turning Nibras into a true international hub for aviation and aerospace.

With the Phase I plots nearing 100% occupation, Nibras-established companies are signing one deal after another. The Mubadala-owned Strata Manufacturing recently secured two contracts with Airbus, totaling more than USD1 billion. The deal will see Strata manufacture components for Airbus’s line of A320, A350, and A380, such as the horizontal tale plane and inboard flaps. Strata also struck a deal with Boeing to manufacture vertical fins for its 787 Dreamliner, and Mubadala recently announced a manufacturing facility to produce Rolls-Royce engine components.

Abu Dhabi’s aerospace ambitions, however, are not limited to the tropopause. The Emirate has several goals and projects destined to put it in orbit around the Earth, and even land on Mars. Between April 16 and 18, 2019, Abu Dhabi will host the Global Space Congress, described as an “exclusive, strategic gathering of global space industry leaders.” The meeting will bring together both public and private industry stakeholders and examine opportunities in the space sector. Hosted by the UAE Space Agency, the event will bring together sector leaders such as Lockheed Martin, Boeing, and Airbus, as well as the UK Space Agency and the Japan Space Agency.

TBY recently met with the Director General of the UAE Space Agency, Mohammed Nasser Al Ahbabi, to understand what the government is doing to build a sustainable, private space sector in the Emirate and country. “We are putting in place the right regulations to attract and protect investment in the UAE space program,” Al Ahbabi said “The government is funding exploration missions, though we want to see the private sector play a greater role in bringing value and assets into the country. I assisted in the launch of the Al Yah 3 Satellite, which will provide vital connectivity to over 600 million people in Brazil and South America. We are also looking at strategies to attract international investors and working with local governments. We are harvesting the space program to showcase our competitive advantage to the world.”

Back on earth, Abu Dhabi is proceeding with its strategic long-term development of network-centric defense. As a consequence, many opportunities opened up for technology companies and segments like avionics and A2AD systems. While commercial partnerships and purchases of the best equipment from other countries remain at the core of the UAE’s Armed forces capabilities, the Emirate has also been placing a crucial importance on the establishment of a local defense strategy that acts as a link between local industry, international industry players, and academia. Although many of the risks facing the UAE are not that different from those nearly any other nation faces, such as natural emergencies, global health threats, and organized crime, the Gulf features many potential destabilizing factors that require a resilient, knowledgeable, and responsive security system. Academic institutions like Rabdan Academy thus become the core of an internally generated framework capable of connecting the human elements of the various governmental and private institutions to establish a shared doctrine for effective national resilience.

This will inevitably lead to more money being spent more with local rather than international companies, unlike its neighbor and strategic partner Saudi Arabia, for example, which out of a total USD40-50 billion a year on defense, spends less than 2% of that on local companies. Emirati companies such as EDIC and ventures owned by Mubadala and Tawazun Holding are thus expected to experience solid growth, adding value to the UAE’s industrial manufacturing sector across not only defense & aerospace, but also automotive, munitions, metals and, more broadly, technology.

That being said, the road to achieving a defense industry at the level of global superpowers is still long, as a number of Tier-2 and Tier-3 contractors are yet to become Tier-1 suppliers before advanced manufacturing can take place at a holistic level.
As such, a key role is ensuring this transition will be played by automation, expected to account for a great deal of development in the defense industry: “the greater the computing power one has, the greater the ability to link their sensors and platform systems with less numeric platforms and manpower to achieve a greater military effect,” stated a representative of a leading defense contractor to TBY. As automation and the ability to deliver military effectiveness increases, the industry will have to adapt, both in military and civil aerospace, especially on the regulatory aspect. Indeed, 73% of the industry insiders contacted by TBY expect the challenge for UAE and many other countries to be operating autonomous systems within the rules of war and engagement.

As the industry is bound to witness an ever-growing blurring of the lines between what is purely defense and what is purely commercial, establishing platforms able to generate synergies across multiple sectors through the Industry 4.0. revolution will be paramount. Epicenters of advanced precision industries like Tawazun Industrial Park (TIP) are thus concrete examples of the Emirate’s willingness to transfer know-how and skills adding to local expertise and manufacturing bases. At the same time, joint ventures such as Exechon Enterprise offer compelling evidence of a locally developed advanced machine technology capable of transforming manufacturing processes and adapting to different integrated factory workflows.