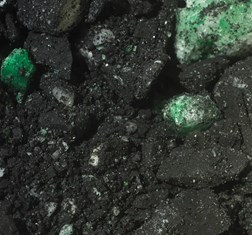 Share on:
For nearly five centuries, the mining and trade of legendary Colombian emeralds has been an out-of-control, yet profitable, affair. The authorities and industry players, however, are now determined to formalize the sector.

Admired by many for thousands of years, Colombian emeralds have made their way to all corners of the world. Some of them, such as the Duke of Devonshire Emerald, the Patricia Emerald, and the Crown of the Andes, have ended up in prestigious museums and galleries, with fascinating stories attached to them.
The story of emerald fever in Colombia, however, was preceded by the story of another much-loved mineral. Legend has it that when Spanish conquistadors arrived in the Americas, they immediately took a particular liking to gold and—to a lesser degree—silver. This inexplicable passion for a metal with a yellowish hue baffled the indigenous people, who were themselves not strangers to minerals.

Mining activities had been common in the Americas and among the indigenous people, including in modern-day Colombia, before the arrival of Europeans, and they would strike veins of gold or precious stones such as emerald from time to time. The native inhabitants of the Andes used emeralds for ceremonial purposes, exchanged them for clay pots and clothes, and even created figurines out of them as offerings to their gods. However, the conquistadors seemed to have an altogether superior level of keenness on gold and precious stones to the extent that they could think about little else. When asked about this overwhelming passion by the natives, Hernan Cortes famously replied, “I and my companions suffer from a disease of the heart which can be cured only with gold.”

When the first Spanish expedition reached areas including present-day Colombia, that particular disease of the heart turned into a soft spot for Andean fine emeralds, whose quality far surpassed lesser European and North African specimens that were common in the Eurasian world. The conquistadors sent back their ill-gotten gains to Europe and ignited the world’s interest in Colombian emeralds.
Today, Colombia still has a thriving extractive sector that generated over USD3.1 billion for the nation’s economy in 2016, according to the Extractive Industries Transparency Initiative (EITI). In addition to emeralds, Colombia has rich resources of nickel, gold, platinum, and silver, as well as non-metals such as salt, limestone, and sulfur. Moreover, the country possesses the largest coal reserves in Latin America.
Over the years, Colombia has kept its status as the world’s leading exporter of high-quality emeralds by meeting 25-50% of the global demand. Extra fine emeralds are notoriously difficult to come by, but when discovered, they can fetch as much as USD4,000 per carat in Colombia and even more in Europe and Southeast Asia.
The most well-known emerald mines are located in Muzo and Coscuez in the Western Boyacá Province, which despite being around 220km away from Bogotá, seems to be worlds apart in terms of geography, infrastructure, and the rule of law. With little or no regulation enforced, it has been claimed that 60-80% of all mining activities in the country are downright illegal or, at best, fall within gray areas of the law. As there are large amounts of money to be made and open-pit mining of silicates does not require any cutting-edge technologies, dissident groups have joined the emerald trade, as well.

Obviously, not all individuals involved in informal mining are criminals. In most cases, underprivileged locals are tempted by low-hanging fruits in the form of gold and emeralds and start digging with minimum equipment and without any consideration for safety measures, which puts their lives at risk and also demotivates the country’s legal mining companies. To put an end to the present lack of central control, Colombia’s public and private sectors, its armed forces, and its policymakers need to join forces and organize the extractive sector.
In 2018, the first international company stepped in with an investment of USD10 million to start digging in a sustainable and standardized manner, pledging that it would remain mindful of the local communities who have no alternative sources of revenue to turn to. Whether the arrival of multinational companies in the Colombian Andes will change the region, however, remains to be seen in the coming months.