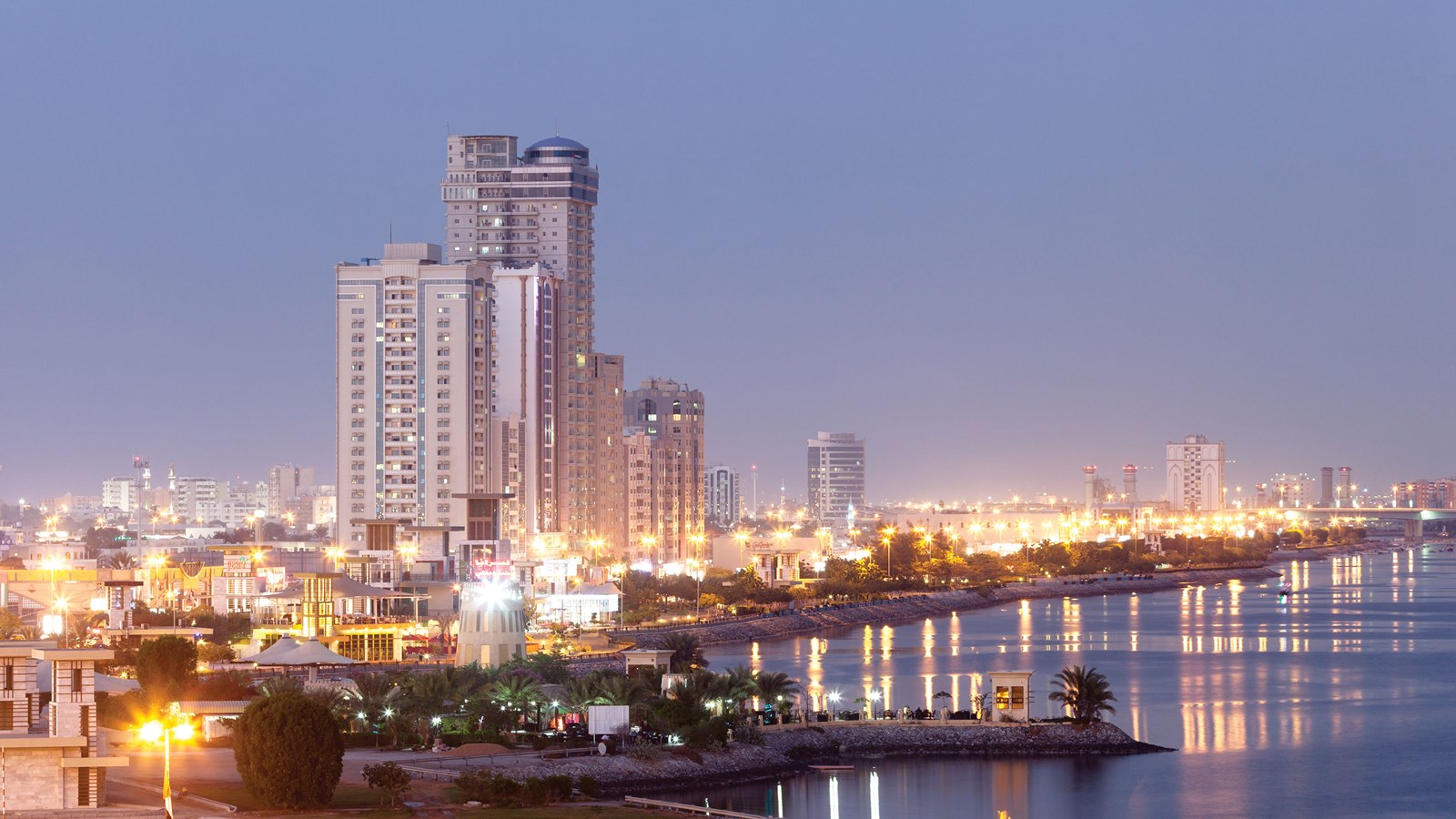 Share on:
Ras Al Khaimah, known colloquially and affectionately as RAK, has its eyes on the prize: a post-oil economy based on knowledge, backed up by a value-adding industrial matrix and services landscape.

Ras Al Khaimah enjoys a fortuitous geographical setting, being the UAE’s first point of entry in the Arabian Gulf. It is also blessed with some of the best aviation networks in the world, meaning its commercial endeavors are a four-hour flight away from 31% of the world’s population in the Middle East and the emerging markets of East Africa and South Asia. It also enjoys excellent expressways and coastal ports, not to mention a new rail network scheduled for the coming years.

Ras Al Khaimah is well placed to benefit from general UAE diversification efforts, having already established an impressive industrial matrix. Notably, too, seven of the UAE’s 11 cement plants are in Ras Al Khaimah, as well as a wealth of heavy industry, including RAK Ceramics, one of the world’s largest ceramics producers. Its urban and industrial infrastructure has been honed to the standard expected by industrial investors elsewhere in the UAE, not least in the absence of an oil economy in the traditional sense, as no exports are made from local production.

Ras Al Khaimah is also committed to becoming a knowledge-based economy, and enjoys the added appeal of being a safe environment in a region of turmoil for both local businesses, and as a stepping-stone to wider markets. This has prompted the government to diversify its economy toward industry, simplify the business environment, and increasingly look to tourism, including the potential for medical tourism.

The Emirate has also opted to pursue diversification by developing itself into an industrial hub drawing strength, and FDI, from a network of industrial free and non-free trade zones. Indeed, while the UAE is still very much dependent on hydrocarbon exports for the time being, Ras Al Khaimah boasts of an economy in which no one sector exceeds more than 20% of GDP. And with industrial, manufacturing, and mining at the tip of its economic spear, the Emirate stands to benefit ahead of key upcoming regional events such as the Expo 2020 and the 2022 FIFA World Cup, and is expected to outpace overall UAE growth.

Perhaps predictably then, in May 2016 Fitch Ratings affirmed Ras Al Khaimah’s Long-Term Foreign and Local Currency Issuer Default Ratings (IDRs) at ‘A’ with a ‘Stable Outlook.’

Sheikh Saud Bin Saqr Al Qasimi, Member of the Federal Supreme Council and Ruler of Ras Al Khaimah, is the driving force behind the Emirate’s growth. Speaking recently, he commented that, “Just as Ras Al Khaimah’s landscape is fashioned from geographical variation, its economic development has been built on diversity and sustainability.”

And it is this landscape that has been the Emirate’s fortune, drawing mining companies as well as tourists. Ras Al Khaimah is home to the largest rock quarry in the Gulf region, courtesy of the Hajar Mountains that begin in the Musandam Peninsula and stretch all the way down to Sur in Oman. This unique geological gift has placed Ras Al Khaimah at the forefront of the non-metal mining industry not only in the UAE, but also in the whole of the GCC. These mountains have supplied the necessary raw materials used for the much-needed cement and building material that has transformed the UAE into what it is today, with raw materials sourced in the Emirate used to build icons such as Palm Jumeirah and the Burj Khalifa. Stevin Rock and RAK Rock were the first companies to be formed to produce and supply material during the 1970s. While Stevin Rock has been mainly focused on exporting materials, RAK Rock has focused on supplying cement plants in the UAE. Companies such as RAK Cement Company and RAK Company for White Cement and Construction Materials are the biggest players, creating world-class cement, clinker, and white cement for the construction sector. RAK Ceramics is probably the most well known firm in the Emirate. The ceramics sector adds a sizable chunk to the Emirate’s GDP and represents a jewel in its manufacturing crown. As the industry leader, RAK Ceramics boasts a global workforce of around 15,000, 8,500 of whom live in Ras Al Khaimah.

Tourism is also a successful draw of revenue for the Emirate, which is on track to achieve its goal of attracting 1 million visitors by 2019. The long-term aim is to attract 3 million by 2025. Rather than compete with the ever-popular tourism hotspots of Dubai and Abu Dhabi, Ras Al Khaimah is carving out its own niche in the sector, with a number of innovative and unique attractions already completed or in the pipeline. Visitor numbers are consistently posting steady growth from key source markets in Europe and further afield. In 2016, the Emirate saw an increase of 45% in visitors from Europe, and an increase of 27% in tourists from the UK alone. The Ras Al Khaimah Tourism Development Authority (RAKTDA) has established specific goals to increase tourism numbers, and along with careful planning and closely monitoring supply and demand, Ras Al Khaimah is projected to easily meet or exceed those targets. “We are on a growth trajectory and extremely upbeat for the years to follow because certain decisions and activities that came to fruition last year are expected to yield results in the years to come,” Yannis Anagnostakis, the CEO of RAK Hospitality Holding, explained to TBY. The pipeline of projects through to 2019 is expected to add another 3,000 rooms to the local hotel market. Ras Al Khaimah’s wide-open desert views, sandy white beaches, warm seawater, and stunning mountains comprise a few of its natural attractions. It is the only Emirate where visitors can combine a desert safari with a beach holiday and mountain climbing, ideal for adventure tourism, family vacations, and any traveler seeking a true cultural experience. Ras Al Khaimah also boasts some of the most sought-after beach properties in the UAE, which are complemented by two professional golf courses, making it a prime destination for leisure tourism.

Like its fellow Emirates, Ras Al Khaimah also offers a strong free zone environment. The Ras Al Khaimah Economic Zone (RAKEZ) was established in 2017 to oversee, regulate, and consolidate the Ras Al Khaimah Free Trade Zone (RAK FTZ) and Ras Al Khaimah Investment Authority (RAKIA). As a result of this consolidation, RAKEZ became one of the largest economic zones in the region with over 13,000 companies—an impressive number not far off Dubai’s 14,000-company strong DMCC.

RAKEZ consists of five economic zones, half of which are industrial zones that cater to manufacturing, industrial projects, trading, assembly, and logistics. In this way, the new entity is signaling its continued emphasis on the industrial sector.

Diversification through RAKEZ will be developed on top of the Emirate’s strong industrial foundations. Efforts to increase non-oil-sector activity offer industrial sector players in RAKEZ access to growing local and external markets in an economy set for long-term growth. At the same time, it also provides the industrial sector with an opportunity to improve its slice of the GDP. Finally, lower costs and an ease of entry through RAKEZ offer smaller companies the opportunity to expand alongside the economy.

Moving forward, the optimism among the Emirate’s leadership is palpable. “The commitment of our citizens, residents, and investors, along with the progress already made, demonstrates our Emirate’s positive and productive transformation. Each day we continue to bring our shared vision closer to fruition. Ras Al Khaimah is truly blessed,” said Sheikh Saud Bin Saqr Al Qasimi.