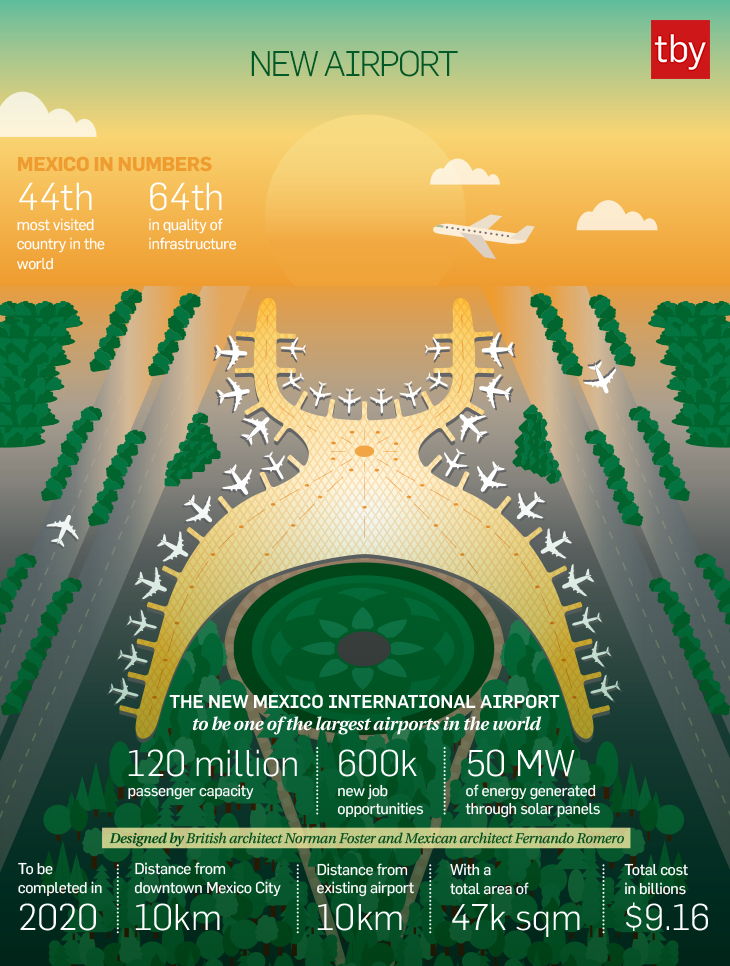 Share on:
Despite being the world's 14th largest economy, Mexico's infrastructure has long been insufficient for its needs. This is now changing—most notably with the building of a major new airport.

President Enrique Peña Nieto last year made headlines when he unveiled the National Infrastructure Plan 2014-18, for which there will be a fund of some $515 million. Yet this did not mention anything about a new airport for Mexico City. A few months later the government added a new investment plan for an airport to be built in a Federal Zone, announcing the plans for construction to begin on the New International Airport of Mexico City on September 2nd, 2014. The new airport will be located on Fed eral Lands Ex-Vaso de Texcoco, 10km from downtown Mexico City and 10km from the existing airport. It will be built on an area of 4,430 hectares owned by the federal government, so there will be no need to expropriate land-adjoining suburbs.

The government announced that world-renowned British architect Norman Foster and Mexican architect Fernando Romero had won this tender for the design of a futuristic, spider-shaped gigantic terminal building for Mexico City. Described by Foster as “the first of its kind” the airport will doubtless be the crown jewel of Peña Nieto’s infrastructure projects. The six-runway project, with capacity for 120 million travelers a year, will cost $9.16 billion and will be built next to the current Benito Juárez International Airport east of Mexico City. In its initial phase, the airport will have two runways and capacity for 50 million passengers. The project will be financed in part with cash flow (own income) from the International Airport of Mexico City and the issuance of debt by the federal government. The Governor of the State of Mexico, Eruviel Avila, announced that the new terminal will create 600,000 new jobs.

Mexico is the 44th most visited country in the world, and ranks 64th for quality of infrastructure, according to the World Economic Forum. Despite the huge potential for growth in the international sector and FDI, the country has been slow to adequately respond to the new global context, continuing to operate with the same airport that first opened in 1952.

The intention is to ensure that the New International Airport of Mexico City forms the main air hub in Latin America: one of the largest in the world and also one of the most environmentally friendly. The terminal will use a single giant structure wrapped in a unique skin that lets in natural light and air, collects rainwater, and will provide incredible views of aircraft above. Support buildings and fields on the site will host even more solar panels, ultimately providing 50 megawatts of peak power, enough to supply a significant portion of the airport’s energy.

The airport will also have its own onsite central energy plant. In the original brief, the Mexican government wanted two separate terminals, but the designers were able to condense everything into one large space. In part, their goal was to avoid the usual airport train between terminals, which would have been difficult to build on the site. Travelers will be able to walk easily between gates, making connections less annoying and saving energy.

This airport has been long awaited. An initial proposal in 2009 was abandoned. Now Mexico—and the region—must wait another four years before the New International Airport of Mexico City opens its doors, and prepares for take-off.