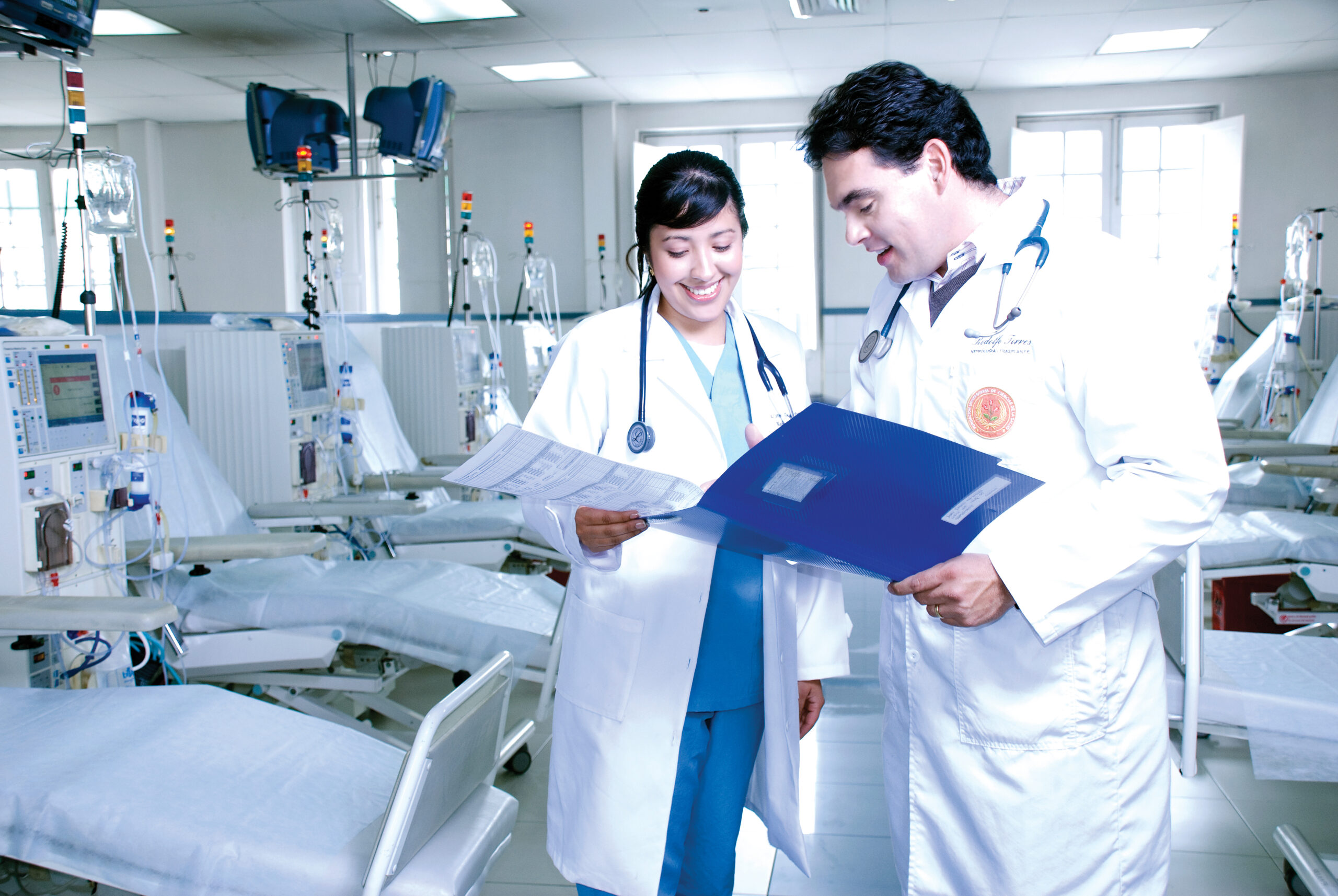 Share on:
A long-term outlook informs Colombia's pursuit to mend and unify the system by pushing through desperately needed reforms.

Colombia’s health care sector has been making slow but steady progress in sectoral reform as legislators and health care professionals work to heal the system. The Health Sector Statutory Law was signed just last February, designed to support a still young mandatory health insurance regime and reign in private insurance companies. In conjunction, the Ministry of Health and Social Protection’s ten-year health plan, launched in 2012, is finding its footing. Medical tourism is continuing to support the sector, as technological advances in surgery are putting Colombia’s clinics and doctors in the spotlight.

In 2014, WHO figures showed total spending on healthcare at 6.8% of GDP. Colombia’s economy has grown at an average annual rate of 5%, and poverty rates continue to fall, from 53.7% to 45.5% between 2002 and 2009. During this same period, the percentage of the population that could not satisfy basic nutritional needs fell from 19.7% to 16.4%. However, distribution of income remains unequal throughout the country, likely attributing to high poverty levels relative to income per capita ($9,392 PPP in 2010).

The life expectancy rate increased between 1995 and 2009, from 65 to 70 years for men, and from 74 to 77 years for women. Fertility rates during the same period fell from 2.9 to 2.4. Colombia has an aging population, which is adding to increasing use of ambulatory and inpatient care along with the long-term use of medicines, in turn putting a significant financial strain on an ever-evolving health system. To note, in Latin America and the Caribbean, Colombia has the second highest old age poverty rate.

Over the last decade acute respiratory infections, acute diarrhoeal diseases, infant mortality and under-5 child mortality rates have declined, nearly reaching the 2015 MDG goal. On a more somber note, maternal mortality remains high with a ratio of 83 per 100,000 live births recorded in 2013, with most deaths attributed to preventable causes. The country also has a low ranking in antiretroviral coverage for people living with HIV/AIDS. Access to primary health care differs according to region, and the spread of transmissible diseases (dengue in particular) is a problem in rural areas. However, in 2013 Colombia’s immunization program recorded 91.1% vaccination coverage in the tracer biologicals (triple viral vaccine and pentavalent DPT), and tobacco control measures have made notable progress. In July 2011, a law came into effect with measures including a ban on all tobacco-product advertising and the sale of packs with fewer than 10 cigarettes.

The early 1990s saw the launch of major health sector reforms in Colombia, with the Constitution of 1991 renewing the people’s civil right to healthcare while simultaneously initiating a decentralization of public funds. With the reform, all health services previously covered by the central government were transferred to over 1,000 municipalities and state-level governments. Compulsory health insurance was introduced under two regimes; the Contributory Regime (CR), designed to cover people working in the formal sector, and the Subsidized Regime (SR), originally inspired by the Alain Enthoven’s managed competition model, designed to provide healthcare access to poor individuals working outside of the formal sector.

The reform, alongside the controversial Law 100 of 1993, which changed the social security general system, privatized the sector, giving private insurance companies (EPSs) the power to manage public funds. Though most goals of Law 100 were achieved, these reforms resulted in a fragmentation of the system, little to none financial supervision of health plans, and a great need for change.

Further reforms continued in 2008, with the landmark ruling of Sentencia T-760, introducing a Health Bill of Rights to help fill the gaps in the health system’s regulatory framework. Beginning in 2011, the government launched major public investigations into suspected fraudulent behavior on the part of mainly the EPSs, which “dramatically eroded public confidence in governance of [the] health system” (Torres and Acevedo, 2013).

It had become evident by this time that having insurance did not necessarily guarantee quality health care. Over the last two years, Colombia has seen the progress of the new Health Sector Statutory Law. On February 16, 2015 Colombian President Juan Santos signed the bill into law. According to Santos, “This project ratifies the principle that health is a fundamental right of Colombians. It enables us to increase the benefits of the subsidized system so we can have a unified system to all. […] [The reform] must transform our health system into a model in which all Colombians are safe and enjoying a health system that meets their expectations.”

The Statutory Law is based on four main reforms. The first reform is the improvement and unification of the POS (compulsory healthcare plan), incorporating the distribution of innovative medicines to all patients, regardless of ability to pay. The second is the ratification of the international reference price system to control the prices of medicines and medical devices. The third reform is the development of a regulatory body to oversee the EPSs, to eliminate the pattern of patients going from one clinic to another only to be denied care, known as the “walk of death”. Lastly, the Law gives doctors more freedom to prescribe medicines needed, regardless of budget constraints.

The 2012-2021 Ten-Year Public Health Plan (PDSP), formulated with the National Development Plan 2010-2014, seeks to eliminate inequities in health access and improve regional effectiveness by positioning itself as “the navigational chart to address the current challenges in public health and to consolidate, under the social protection system, technical capabilities in the national and local arena for the planning, implementation, monitoring and evaluation of interventions, according to the Millennium Development Goals (UN, 2000)” (MinSalud).

Though the Plan is being stewarded by Colombia’s Ministry of Health and Social Protection, it will involve the participation of local governors and mayors. The aim of the PDSP is to bring together citizens, experts, and the government over 10 years “to converge the social, economic, and human development” of Colombia. The Plan has eight priorities: environmental health; mental health and social coexistence; food and nutrition security; sexuality and sexual and reproductive rights; healthy living and communicable diseases; healthy living and non-communicable conditions; public health in emergencies and disasters; and health in the workplace. The Plan also addresses the differential management of populations and the strengthening of the Health Authority.

As Armando González M., General Manager of Centro Médico Imbanaco told TBY, “I see the healthcare system in Colombia improving, as we are getting a viable healthcare plan with a very wide coverage, and better quality in all clinics and hospitals.”

GETTING MORE FOR LESS

Colombia is recording significant increases in medical tourism as foreigners flock not only to enjoy the country’s beaches and rich biodiversity, but also to take advantage of low cost high-quality procedures, and professional follow-up care. The dollar value increased to $216 million in 2013 from $134 million in 2012, with about 50,000 patients in 2013, compared to 31,000 in 2012, as reported by Colombia Reports.

In 2011 Colombia’s Trade Ministry reported that the most popular treatments are heart surgery (41%), general surgery (13%), gastric band surgery (10%), plastic surgery (10%), cancer treatment (6%), orthopedic treatment (4%), dental care (2%), and eye care (1%). According to David Castro Lotero, co-founder of medical tourism promotional company Clinical Travel, Medellí­n and Cali are popular destinations for Lasik (corrective eye surgery), cosmetic surgery, and dentistry, while Bogotá is strong in cardiology. The cost of medical surgeries in Colombia is between 60-65% less than in the US or Spain.

The country is performing the second highest number of plastic surgeries in Latin America per year, after Brazil. In 2012 the cost of facelift surgery in Colombia was $5,000 compared to $15,000 in the US, and breast implants were $2,500 in Colombia compared to $10,000 in the US. General Secretary of the International Society for Aesthetic Plastic Surgery (ISAPS) and President of the Colombia Plastic Surgery Society (SCCP) Dr. Lina Triana says, “[Medical tourists] come here not only for the price, as was the case 15 years ago, but for the quality of the experience.” As Jonathan Edelheit, CEO of the Medical Tourism Association, explained to Bloomberg Business, “Doctors are good in Latin America because demand is so high,” says Edelheit. “Plastic surgery for breasts and lips is part of the culture.” Under construction is the El Bosque Beauty Clinic Hotel in Bogotá, a $11.3 million cosmetic surgery complex that will offer plastic surgery in addition to five-star accommodation.

Bogotá’s Clí­nica de Marly was ranked the third best hospital in Colombia by the National Ministry of Social Protection. The clinic has worked in bone marrow transplantation for the last 20 years, as well as other complex medical areas, including kidney transplantation, and performs over 130 transplantation surgeries a year. “We are also pioneers in the use of leading-edge technology,” general manager Luis Eduardo Cavelier Castro, M.D. told TBY.

The clinic made headlines in February 2013 when it became the first in Latin America to use robotic technology in a pediatric operation. Surgeons removed a malformation on a two-year-old boy’s urethra and repaired the urinary tract, with a robot precise enough to peel a grape. According to Dr. Pablo Gomez, who led the team of doctors, this operation put Colombia “in the forefront of robotic science in Latin America.” Cavelier adds, “This technology permits us to undertake extensive work in oncology.”