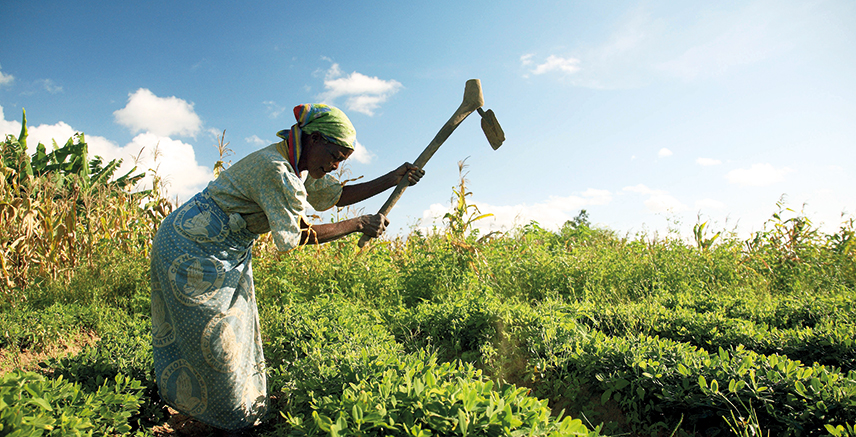 Share on:
Investment in Mozambique's agriculture sector has increased over the years, and while this has resulted in some breakthroughs, productivity remains low and hunger widespread.

Mozambique’s agriculture sector is the country’s largest employer, providing a livelihood to almost 81% of the labor force, according to the World Bank. The sector is still heavily subsistence farming oriented, with less than 10% of households selling their surpluses and 99% of farmers are smallholder farmers, relying on family labor. The majority of these farmers cultivate very small plots of land, and the average size of their farms range from 0.5 to 1.5ha, with limited inputs and mechanization. Consequently, yields are low, and although the government has been working hard to boost food production, poor distribution networks and storage infrastructure means that many go hungry and food aid is necessary. Over the years, the sector has suffered from a lack of care and attention following the commodities boom and focus on monetizing other resources. Today, however, there is a real need and momentum to re-focus policy on supporting and developing this vital slice of the economy.

The government has ambitions to base the economy on agriculture, reducing reliance on food aid and reducing the import bill for agricultural products. The Minister of Agriculture and Food Security (MASA) told TBY, “Over the coming five years our development strategy will aim to increase production by expanding productivity in agriculture. We want to consolidate what we have done with products where we have already reached self-sufficiency, such as maize and cassava.” The commodities that have been prioritized by recent policies are beef, cassava, maize, poultry, rice, and vegetables, such as potatoes.

To get a sense of the scale that faces the government, in 2015, Mozambique ranked 180/187 on the Human Development Index (HDI). The index estimated that half a million children aged between six and 23 months are undernourished and 34% of the population is chronically food-insecure. A newer problem facing the government is that while 70% of Mozambicans live in rural areas, urban food insecurity is becoming an increasing problem.

One of the main reasons for this food insecurity is that some of the food producing areas are prone to seasonal flooding, with many large rivers flowing through Mozambique. There are also poor distribution networks for the minority of farmers who sell their products. Often, if one region is affected by drought or flooding, that region goes hungry. In Gaza, Sofala, and Inhambane provinces there is a “lean season,” where most families often rely on humanitarian assistance to protect their basic livelihoods. This season is usually from October to December, but in 2015 it started a month earlier in the southern region, according to the Famine Early Warning Systems Network. Its report in May 2015 calculated that about 138,000 people faced “stressed acute food insecurity outcomes” and required humanitarian assistance.

As it stands, the country is split into three regions, with different climates and soil types, which result in a diversified portfolio of crops. There is the north, between the Zambezi and Rovuma rivers, the central region between the Save and Zambezi rivers and the southern region, south of the Save River. According to a 2015 World Bank report on risks in the agricultural sector, the main staple crops are maize, sorghum, rice, millet, and vegetables, such as potatoes, sweet potatoes, cassava, and beans. These crops are usually planted alongside cash crops, to supplement family income. These cash crops are bananas, cashews, cotton, copra, sugarcane, sunflower, and tobacco and most family farms combine food crops with a single cash crop. While agriculture accounts for 31.8% of GDP, the sector is largely informal, with the majority of production going to local consumption.

Mozambique exports some of its agricultural products, but since the natural resources boom, agricultural exports have declined from 31.4% of total export revenue in 2002 to 14.4% in 2008 and then 3.8% in 2013. According to data from the Observatory of Economic Complexity, in 2013, raw tobacco made up 4.2% of all Mozambique’s exports, worth $290 million. Export of vegetable products was valued at $238 million, animal products $69.7 million, and foodstuffs (excluding raw tobacco) accounted for an export value of $170 million.
Mozambique still relies heavily on food imports. For example, for the same period the value of imported vegetable products was $554 million (of which rice made $234 million, and wheat $191 million). A total $453 million of foodstuffs was imported, and $227 million of animal products.

On the smaller scale, livestock plays an important part in the livelihoods of small and medium-sized producers. According to government statistics, in 2008, 58.8% of small and medium producers had chickens, 26.2% had goats, 12.1% had pigs, 11.4% had ducks, and 6.7% had cattle. In the same year, livestock made up 10% of the country’s total agricultural production but contributed only 1.7% of GDP in 2008.

Mozambique relies heavily on imports for every commodity in the livestock sector. It was estimated by the government that over 40% of beef consumed in Mozambique is imported from neighboring South Africa. In 2013, importing animal products added $227 million to the import bill. One barrier to increasing livestock produce is that almost all of the inputs such as medicines, vaccines, veterinary instruments, and equipment for the sector are also imported, making them expensive and largely unavailable to the majority of producers. Likewise, refrigeration facilities for slaughterhouses are rare. There is also a lack of infrastructure for watering cattle, which also constitutes a problem for slaughterhouses, which need running water for cleaning facilities and the pens where animals are held before slaughter.

One sub-sector that is performing well is poultry, where production has increased in recent years. There is a small but dynamic commercial sub-sector that is working to replace imports and meet the growing demand for chicken and eggs in urban centers.

Likewise, fisheries also hold promise in developing a more sustainable food import/export ratio, especially when you consider that Mozambique has a coastline of 2,800km. According to Minister Agostinho Salvador Mondlane, in 2015 the annual production of fisheries was 287,729 tons, a 13% increase on 2014’s production statistics, and 5% of that was exported.

Looking ahead, agricultural risk management is central to Mozambique’s development and multiple stakeholders have advised the government on the challenges and solutions available for increasing the availability of food to alleviate hunger. The need for progress is especially pressing, especially as climate change models indicate an increased likelihood of extreme weather events such as flooding, drought, and cyclones will lead to severe negative impacts on the agricultural sector.

On the micro level there are options for development, such as public-private partnership and the creation of cooperatives for secure market places. To facilitate investments, however, there needs to be significant public investment in data collection as well as substantial growth in credit or input utilization. Another aspect is that, at the moment, low levels of rural lending and a lack of direct regulatory incentives for lenders to transfer agricultural risk means agricultural insurance is almost nonexistent. Without the capital support, most smaller scale enterprises will be difficult to get off the ground, let alone scale up.

Lack of storage is another of the reasons for poor productivity and in some places more than 40% of crops are lost due to bad storage conditions. With many farmers unable to store their produce, not only are locals exposed to shortages, but any excess yields cannot be gathered en masse and moved to areas of low yields. The Ministry of Industry and Trade has therefore been employing Silos Cordoba to build one silo a year, around 5,000 tons for grain storage.

During MASA’s interview the Minister detailed how imports of agricultural equipment such as tractors and pipes for irrigation will be duty free and spare parts for those goods will face low levels of taxation. They also intend to develop six agriculture development corridors to establish agriculture duty free zones to make the country more attractive in terms of investment, thus making the country more competitive in terms of agriculture.

Amongst this hum of activity, industry is developing and there are windows of opportunity opening. For example, the cashew industry produces around 80,000 tons a year, employing 1.2 million people. There are currently 14 processing facilities, most of which are located in the north of the country, and with players like Indústria De Processamento De Castanha De Caju De Mohomed Rafik Ebrahim pushing modern practices, the sector is contributing in terms of providing both livelihoods, as well as food for both local and foreign market places.

Likewise, bananas offer a field of opportunities. The African Food Company, for example, is capitalizing on its planting in 2012, and currently producing 200 tons a week, 90% of which is exported to South Africa.
Developing and supporting the sector is a key aspect of the government’s ambitions and improving competitiveness will not only boost exports and reduce the import bill, but enhance food security and alleviate hunger throughout the country. While the problems will not be solved overnight, small steps are being taken in the right direction.