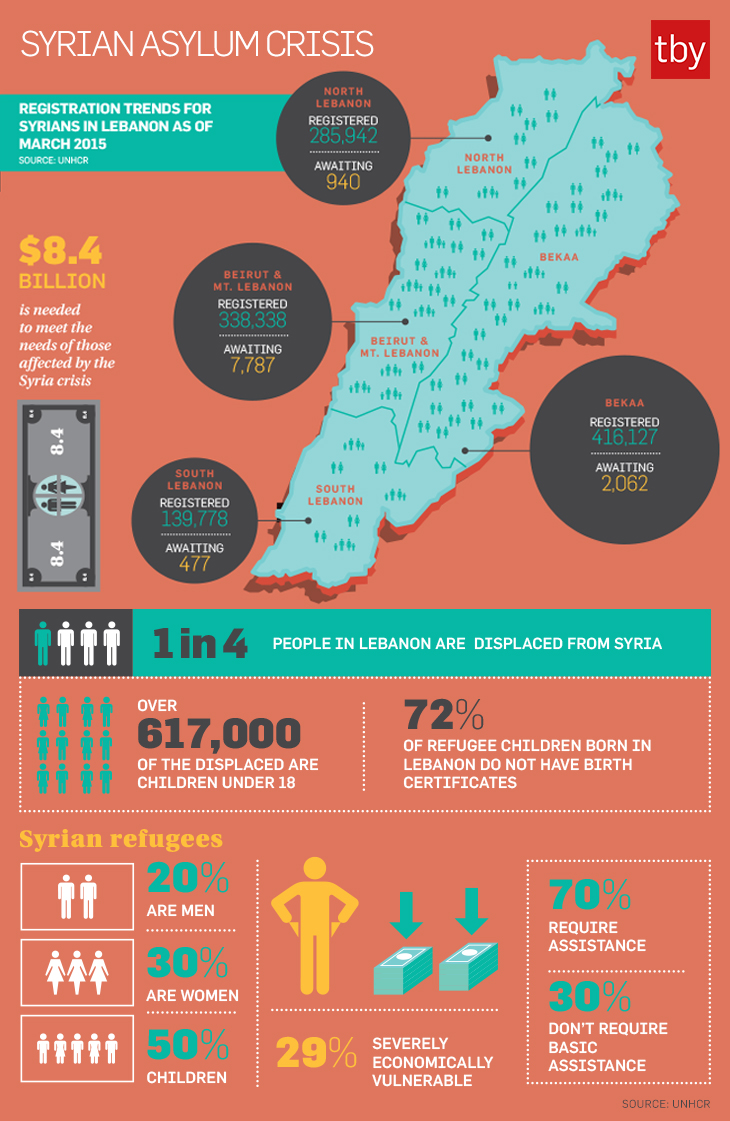 Share on:
The impact of Syria's crisis on the economic and social stability of Lebanon has been profound, with over 1.18 million displaced Syrian nationals now living among the 4 million Lebanese population, Lebanon has the highest per capita concentration of refugees worldwide.

Three years after the conflict in Syria began, neighboring Lebanon has become the country with the highest per capita concentration of refugees in the world. The number of Syrian nationals fleeing into Lebanon surpassed 1 million in April 2014, coming at a steep price for Lebanon and its people. This devastating milestone worsened by rapidly depleting resources of the host community struggling to keep pace with the crisis that shows no signs of diminishing.

From the economic point of view, Lebanon has suffered a significant decline in trade, investment, and tourism, with country’s security threatened as the conflict in Syria spills across the border. Lebanon’s public services and infrastructure, fragile even before the crisis, were put under severe strain as a result of the massive refugee influx. A significant increase in public expenditures resulted in public services struggling to meet increased demand, with health, education, electricity, water, and sanitation roughly taxed.

Socially, even the most remote Lebanese communities have been deeply affected by the crisis. Refugees live throughout Lebanon in over 1,700 localities, with the majority settling down in the country’s poorest communities. In some places, especially the Bekaa Valley, refugees outnumbered local residents. With increasing demand for shelters, the prices of accommodation have risen, negatively affecting Lebanese renters.

Refugee arrivals to Lebanon grew at an unparalleled pace throughout 2013 and 2014, with 47,000 refugees being registered per month by UNHCR. As the proportion of refugees to the Lebanese nationals grew to one quarter, the government of Lebanon took steps to limit access to the country in order to preserve its peace and stability. The measures, introduced progressively from mid-2014, limited the refugee access to Lebanon to exceptional humanitarian cases. As a result, in the beginning of 2015, the number of newly registered refugees with UNHCR was 25% of the number registered in January 2014. Only a modest increase in the registered refugee population is anticipated for the second half of 2015. It is expected that Lebanon will be hosting a population of 1.5 million Syrian and 270,000 Palestinian refugees (an estimated 45,000 of them from Syria) by the end of 2015.

Refugee needs are countless and funding has never been enough to respond to the needs of all. Vulnerability assessments have shown that close to 30% of refugees require assistance to meet their basic needs. 70% of refugees struggle to meet their minimum daily food requirements. With limited work opportunities, pre-crisis savings diminishing, and last assets being sold, their vulnerability successively increases.

Children under 18 years of age comprise over 50% of the total refugee population, with nearly 400,000 of school age (5-17). Since the outset of the crisis, Lebanon was taking great efforts to enroll as many refugee children as possible in the public school system. In 2014, the Lebanese Ministry of Education and Higher Education introduced “Reaching All Children with Education” (RACE) program, which enrolled over 100,000 displaced children in the formal public system for the 2014—15 academic year. The steering committee of RACE, with representation from the ministry, UN agencies, and donors, successively supports the program with a progressive raising of the target up to 200,000 children by 2016.

Receptivity towards refugees was very strong in the beginning of the crisis; however, as the crisis has progressed receptivity has dwindled. The pressure placed on local resources, infrastructure, and services has strained the patience of the host community. Conversely, while refugees still have largely good relations with their host community, this too is at risk of fraying. “For Lebanon, a small nation beset by internal difficulties, the impact is staggering,” said António Guterres, UN High Commissioner for Refugees. “The Lebanese people have shown striking generosity, but are struggling to cope. Lebanon hosts the highest concentration of refugees in recent history. We cannot let it shoulder this burden alone.”