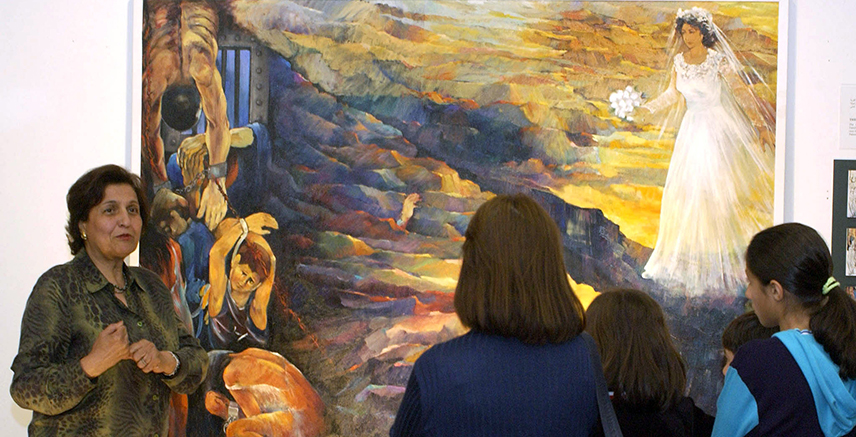 Mightier than the Sword

Share on:
Playing to its many strengths in writing and culture, Sharjah is looking to pen a new chapter in the UAE's history.

Al Akhal, a leading Palestinian painter describes her painting entitled ‘The Rift’ depicting the story of Palestine to local visitors at Sharjah in the United Arab Emirates

Legend has it that HE Sheikh Sultan Al Qasimi was given a golden dagger by his father when he was young, but later pawned it in order to buy books.

It is an apt metaphor for Sharjah’s diplomatic strategy, which relies heavily on its status as a cultural capital of the Arab world and places books at the center of its cultural policy.

Given that the Sheikh himself is a prolific author, this comes as no surprise.

Recently, HE Sheikh Al Qasimi embarked on several bilateral diplomatic visits centered around books and cultural exchange. During his visit to the National Library of France, he presented the French translation of his new book, while in a meeting with the President of Costa Rica at the Center for Gulf Studies the Sheikh offered another one of his works.

The Finnish Minister of Development praised the balance between development and culture found in the Emirate during his recent visit, and in another meeting the Indian Chief Minister of Kerala expressed his wish to open a Kerala cultural center in Sharjah.

This eclectic range of visits and partnerships with book fairs around the world form part of a long-term bid to reach out and create cultural links with countries beyond the Muslim world.

In the multilateral sphere, Sharjah will be the official guest of honor at the August 2018 São Paulo International Book Fair, one of the largest and most important cultural events in Latin America.

Sharjah was also awarded the title of World Book Capital for 2019 by UNESCO after a long lobbying campaign.

Back at home, Sharjah Publishing City, a publishing house, is being established, while the annual Sharjah International Book Fair, the third largest book fair in the world with more than 1,500 publishers and 300,000 visitors, is going from strength-to-strength.

Because of its size and unorthodox approach to diplomacy, Sharjah uses its soft power as a cultural center to strengthen its presence on the world stage.

Due to its niche diplomatic approach, it complements the other UAE emirates, particularly Abu Dhabi and Dubai, by helping to improve perceptions of the Gulf and the UAE in the wider world.

In other areas Sharjah is developing in a truly international presence, using its strong manufacturing industry and exports, as well as its unique geographic position to enhance diplomatic links with other countries. The cultural policies are used to pull in FDI, while the free zones act as recipients of foreign companies wanting to invest, particularly in the fields of media.

The Emirate’s primary export recipients are nearby countries, namely Saudi Arabia, Oman, and Iran, with other emirates coming in fourth position, followed by Iraq. The fact that Sharjah exports more to three neighboring countries than its fellow emirates in the UAE is evidence of its impressive economic influence in the region.

Sharjah’s leaders have consistently praised its unique traditional culture as a key contributor to the Emirate’s attractiveness, both as a place to live and to invest. With so many books under his belt already, the Sheikh could be in a position to write the next chapter in the country’s history.

How has Qatar Foundation helped shape the human capital of the nation?

Doha will capitalize on the legacy of the World Cup to transform itself into a MICE tourism hub.

Qatar has achieved one of the highest levels of food security in the world.

Looking for an Equal Standing