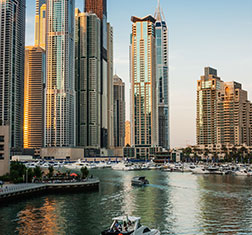 Share on:
TBY takes a look at what opportunities Brexit presents to outside investors, and the implications for Dubai and the UAE.

The UK’s new Chancellor of the Exchequer, Philip Hammond, recently gave his first Autumn Statement to the House of Commons, one of two annual statements that HM Treasury makes each year to parliament. In the wake of the Brexit vote, Hammond calmly noted that the UK economy was “resilient” but would have to undertake a further GBP122 billion of borrowing.

The announcement was met by jeers and groans in the house, burying the conservative’s election promise to reduce the budget deficit by 2020, and instead laying out a budget that has no hopes of being balanced for another five years. Former-Chancellor George Osborne’s “long-term economic plan” for zero borrowing has effectively been abandoned, and the new Chancellor outlined plans to carry on borrowing and spending, with a fiscal loosening of almost GBP9 billion by 2021-22.

Among all this, the government has earmarked USD23 billion for investment in innovation and infrastructure, of which GBP1 billion will go into broadband and testing5G networks. All this seems relatively puny in comparison to Donald Trumps USD1 trillion infrastructure plan, but has been met by relative optimism by the markets, with the pound jumping 1% against the euro to a 10-week high to EUR1.18 against the pound.

For investors from the UAE, the growing level of debt has had mixed receptions. More debt raises the prospect of sovereign bonds, which would be good news for those looking for safe-haven investments. The National Infrastructure Commission, which was launched last year, with the ambition to outline infrastructure projects, is the target of this financial support, but many fund managers expect bottlenecks, with a lack of “shovel-ready” projects to invest in, and it is largely unexpected that investors exposed to infrastructure-based asset classes will see any immediate earnings boost. Similarly, many of the stocks exposed to infrastructure are already fully valued and stand to gain little.

The GBP1 billion targeting IT-based infrastructure is also looking relatively small fry in comparison to Dubai, where huge investments in the Internet of Things. Deloitte in 2016 predicted that the smart city market in Dubai would increase from USD400 billion to USD1.5 trillion by 2020, creating investment opportunities of as much as AED17.9 billion by 2019. According to Ciso and Smart Dubai’s 2015 report, this is part of USD19 trillion in opportunities worldwide. While the UK’s investment figures look sizeable, the scale of the projects do not reach the depth of opportunities east of the Strait of Hormuz.

The UK’s property market has long posed an attractive offering to investors from Dubai. Last year, a TBY survey found that 83% of interviewees in the real estate and construction sector who were investing in real estate overseas were investing in the UK. However, with the property market gaining traction again in the UAE, with a strengthened policy framework surrounding rent rises and off-plan developments, the UK market could be a sector that UAE investors are switching their attention away from. At the same time, Dubai’s rents are down YoY, as much as 10% in some areas, which may damage sentiment among foreign investors scanning international real estate markets for big yields. Whether or not the unpredictability of the UK market may diminish the long-term value of existing asset quality of UK property remains to be seen, but some agree that now is a good time to buy with the pound weak.

From the construction side, within Dubai’s hospitality sector, another 35,000 rooms need to be built for Expo2020, all of which must be financed by investors. Over 2015, Dubai’s government reported a 16% growth in the number of greenfield projects in the Emirate, amounting to AED29 billion. In the UK, in comparison, the Autumn Statement earmarked GBP2.3 billion for a housing infrastructure fund for up to 100,000 new homes in high-demand areas. This is seen as an inadequate sticking plaster over an even greater real demand of between 232,000 and 300,000 homes per year. Whether or not UK investors will be looking overseas to fund these demands will be interesting, with the UK being one of a pool of five investors that supplied 76% of Dubai’s FDI for 2015, amounting to AED15 billion.

The UK’s Secretary of State for International Trade, the long-serving Conservative politician Dr. Liam Fox, made the UK’s continued commitment to the UAE clear during his visit to the country in September 2016. At separate events he outlined how the countries now target AED120 billion (USD25 billion) in bilateral trade by 2020. But with the after-effects of the Brexit vote still up in the air, only time will tell if the same story is to be told for investment.