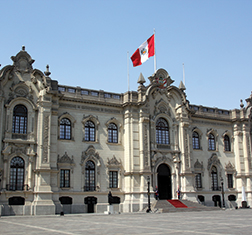 Steady As She Goes

Share on:
Peru's new president, Pedro Pablo Kuczynski, will look to continue export-based economic policies that have lifted millions out of poverty over the past two decades.

William Faulkner said: “The past is never dead. It isn’t even past.” Faulkner was talking about Mississippi, not Miraflores, but Peru’s 2016 political landscape could make one question that. The legacy of the 1990s—both good and bad—was everywhere as the country went through a tightly contested election and sought to continue a wave of economic development that has lifted millions out of poverty over the last two decades. The 1990s remain a critical decade for understanding the sources of Peru’s rapid growth and the internal conflicts that resulted in the key social and political issues in Peru today. The country’s stable free-market economy, its numerous trade deals, and its social conflicts can be traced back to events in the 1990s that continue to reverberate today.

Elected in 1990, Former President Alberto Fujimori’s 10-year reign followed a period of left-wing economic policies that led to hyperinflation and necessitated help from the IMF to prevent secure loan funding. After Fujimori won the election, he introduced a series of free-market reforms that opened Peru’s economy up to foreign investment. This included the privatization of national industries and new legal frameworks allowing for easier foreign investment. He also pushed for increased access to education and sought to eradicate the Shining Path, a Maoist political group responsible for widespread acts of terrorism. Economically, Fujimori’s efforts were a success in the long term; poverty rates fell, safety improved, access to education increased, and the Peruvian economy began a new period of development that saw GDP growth average 6% from 2002-2012. Less unanimously successful were some of the actions he took to accomplish this. Frustrated with congressional deadlock, Fujimori carried out a presidential coup in 1992, closing congress, purging the judiciary, and suspending the constitution. Public support for Fujimori was high after the self-coup, but began to wane in the mid-1990s over concerns about the Fujimori administration’s more authoritarian positions, including restricted freedom of the press, widespread human rights violations, and corruption charges. After a rising wave of opposition, he fled the country in 2000 then returned to be convicted on human rights charges in 2012. Today, he remains imprisoned outside Lima.

Fujimori’s legacy is critical to understanding Peru’s modern political landscape. His move toward a globalized free-market economy is what gave the country the economic wealth and stability that made it a leader in Latin America. Under his reign, terrorism fell, setting the stage for the more stable political system that emerged in the 2000s. However, the human rights abuses of Fujimori’s reign meant that the economic progress he was shooting for did not truly come to pass until the 2000s. In the years since his exit, the country has become a regional leader off the strength of its export-based economy and stable political landscape. Poverty has continued to decrease; between 2008 and 2013, 7 million Peruvians moved out of poverty. Today, his legacy is mixed, with supporters of “Fujimorismo” matched by equally passionate detractors who seek justice for the forced sterilizations and illegal killings conducted by his military squads.

For evidence of how Peru navigates the legacy of the 1990s, look no further than the 2016 presidential election. Fujimori’s daughter, Keiko Fujimori, was the early frontrunner after losing to left-wing congressman Ollanta Humala in the 2011 election. Her chief competitors included former president Alan Garcí­a, left-wing congresswoman Verónika Mendoza, and center-left Pedro Pablo Kuczynski, a former World Bank economist with decades of experience in various Peruvian administrations. Fujimori easily won the first round of voting, but fell short of the 50% needed to avoid a runoff with Kuczynski, who narrowly took second over Mendoza after two other candidates were dropped from the ballot for violating election rules. Fujimori was a strong favorite in the second round of voting— she had the most robust media and advertising presence and a deep and passionate base of support in the poorer regions of central Peru who benefited the most from her father’s efforts to build schools and decrease crime. Kuczynski, who even his staunchest supporters would concede was a somewhat less than electrifying candidate, trailed considerably in early polling. However, two key events hit Fujimori hard in the closing weeks of the campaign: first, news broke that her vice-president was being investigated by the DEA for laundering drug money. Already widely believed to be taking money from illegal miners and narcos, the news further deepened concerns about Fujimori’s political connections. Secondly, a wave of left-wing opposition rose up against the return of “Fujimorismo.” Sparked by Mendoza’s endorsement of Kuczynski, a strong and organized opposition denounced Fujimori, linking her to her father and pointing out that she had left open the possibility of commuting her father’s jail sentence if elected. Thanks to these efforts, Kuczynski pulled ahead in the closing weeks to take a narrow victory, winning by less than 50,000 votes out of 18 million cast.

As president, Kuczynski will serve a five-year term as head of state and head of government. He will not have a majority in Peru’s 130-member congress, as Fujimori’s Fuerza Popular party won a majority of 73 seats in the 2016 elections. Like Kuzcynski, Congress will serve five-year terms. Peru’s judiciary, the third and final branch of the political system, is headed by a 16-member Supreme Court. Beneath this court are 28 superior courts, and then two lower levels of district courts. Peru’s current level of political stability ranks it as one of the leaders in Latin America, making it an enticing spot for foreign investors. Key global organizations have recognized the country’s efforts and recent development; Peru hosted the 2015 IMF Annual Meeting, the first Latin American Country to do so in 48 years, and will host the 2016 Asia-Pacific Economic Cooperation meetings.

As president, Kuczynski has expressed his desire to maintain the inflow of foreign investment and strengthen Peru’s ties with the global economy. Peru’s aggressive export policy has included the signing of several free trade agreements, and today over 95% of the country’s exports are covered under FTAs. These include deals with the EU, the US, and the Pacific Alliance, which includes Colombia, Mexico, and Chile and accounts for 36% of all Latin American GDP. Most recently, Peru was a signatory of the Trans-Pacific Partnership, a landmark trade deal that included 12 Pacific Rim countries with a combined GDP of over USD28 trillion. The deal has provisions for cutting more than 18,000 tariffs, standardizing environmental regulations, streamlining intellectual property rights, and regulating disputes between investors and states. For Peru, this deal would mean access to a wealthy and diverse group of trade partners, creating new opportunities for a diverse range of domestic industries. The TPP has not yet been ratified by the required number of countries, but Kuczynski has stated he is in support of the deal and hopes to see it come into effect soon. If it does not pass, his administration will seek additional bilateral deals with the participating countries. Kuczynski has also been vocal about his desire to forge further connections with Chinese investors, arranging meetings between key members of both communities and highlighting potential opportunities in mining and industry.

Going forward, one of Kuczynski’s main priorities will be improving national infrastructure. The gains of the last two decades, while numerous, have in many places bypassed Peru’s rural regions. This has been a continued source of tension that has flared up when foreign firms attempt to extract natural resources in the provinces; rural communities, feeling ignored by Peru’s centralized power structure and excluded from the financial gains of these projects have protested and cost billions of dollars in delays. Increasing access to basic social services in the provinces would allow for a more skilled labor force, greater economic opportunity, and a brighter future for a nation that already has so much to look forward to.