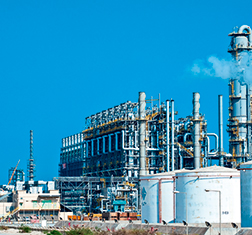 Share on:
Industrial manufacturers look ahead toward localization, a move that is expected to reduce the cost of raw materials and attract more international companies to participate in the sector.

Saudi Arabia’s variety of export-oriented industries—including oil and gas, metals and mining, logistics, agrochemicals, and FMCGs—makes it the largest industrial producer in the Middle East. Though historically dominated by hydrocarbons output, such as oil production and petrochemicals, the sector is seeing dramatic diversification under the guidance of the National Transformation Plan (NTP) 2020. One of the key goals of the NTP is to boost production at Saudi Arabia’s industrial cities from 252 million tons to 309 million tons annually.

While the NTP is a short-term target, Vision 2030 is carrying the country toward a wider plan of economic diversification, job creation, and localization in sectors other than oil and gas. “This is a huge push toward new, non-oil related local industries as well as exporting. It is not just about local content for projects; it is about creating opportunities here,” Aiman Al-Masri, CEO of MESC Group, told TBY. “The aim of the 2030 Vision is to have high levels of industry, but also to have local suppliers for these industries.”
The plan to create opportunities for local manufacturers also has the trickle-down effect of reducing the cost of raw materials. With more supplies being sourced locally, industrial companies in Saudi Arabia are expected to see increased profit margins. Mohammed Marwan Ourfali, General Manager of Balkis, explained in an interview with TBY that, “By collaborating with other companies and filling large volume orders, firms can bring down costs and stimulate the domestic market. We need to develop a long-term vision in the local market, because this can stimulate growth for many years to come.”

Official Saudi Arabian oil company Saudi Aramco is the force behind a forward-thinking added-value campaign to boost local suppliers in the market. With a forecast to spend SAR1.4 trillion (USD373 billion) over the next 10 years, the company will ultimately play a key in the success of the NTP 2020. “Our partnership with [suppliers] will create the economic and industrial building blocks for the Saudi energy sector,” Abdulaziz AbdulKarim, VP PSCM of Saudi Aramco, told TBY. “It will also create hundreds of thousands of direct and indirect jobs for talented young Saudi men and women over the long term.” To meet the demand for skilled manpower, Saudi Aramco is establishing training centers and programs in collaboration with related government entities. By 2030, the company will be operating approximately 28 training centers and 360,000 graduates. During 2016, the company spent over SAR10 billion (USD2.66 billion) on locally manufactured materials, representing 43% of overall expenditures, the highest percentage ever in its history. Over the medium term, the company is determined to double the share of its spending on locally manufactured materials and services to reach 70% by 2021.

In light of plans to diversify away from oil and gas dependency, Saudi Aramco has launched an innovative program that will be mutually beneficial for both public and private industrial players. The In-Kingdom Total Value Add (IKTVA) program is Saudi Aramco’s platform for taking action to drive additional domestic value that will “support the rapidly changing economic environment and foster future prosperity.” Saudi Aramco has set its sights on producing long-term, tangible benefits, prioritizing consistency and transparency for the more than 1,000 industry suppliers across the company’s local and international network. “IKTVA has been embedded in approximately SAR60 billion (USD16 billion) worth of contracts,” AbdulKarim explained.
Another pillar of the industry sector is the Saudi Arabia Basic Industries Corporation (SABIC), a Tadawul-listed, 70% government-owned manufacturing company established to convert oil byproducts into value-added chemicals, polymers, and fertilizers. As the world’s fourth-largest chemical producer, SABIC specializes in ethylene glycol, polyethylene, polyolefin, polypropylene, granular urea, polycarbonate, polyphenylene, and polyether imide. The conglomerate currently has a number of potential projects in the feasibility study stage, including petrochemicals projects in the US and China. In early 2017, SABIC was set to start a feasibility study in agreement with Saudi Aramco as part of an MoU for the development of an oil-to-chemicals project in Yanbu. With the eventual aim of processing crude oil into chemicals without any intermediary steps, the cost of the project is estimated at USD30 billion.

Jubail, Yanbu, Ras Al-Khair, and Jazan are the major industrial cities that also serve as logistics and manufacturing hubs in the country. However, the government is also working on the construction of production centers for manufacturing and light industries in Raas Abu-Gamis, Bani-Tamim, and Debaa, areas that stand to benefit from the abundance of local natural resources that are available. In tandem, a program for localization and the development of new infrastructure is underway at Yanbu industrial city, where renewable energy, rubber, spare parts, and industrial gases form the major segments of the zone’s output. Meanwhile at Jubail industrial city, Ras Al-Khair, and Jazan, the government is focused on the development of industrial clusters that can feed into the expansion of the Saudi Aramco refinery in Yanbu. The authorities have also pledged to develop value-added basic and transformational industries in Jubail and Ras Al-Khair, as well as establish housing in all four industrial cities, launch a minerals port in Yanbu, and enhance Jubail by building up multi-modal logistics channels.

Yanbu is currently the third-largest global refining hub in the world and the largest oil shipping port on the Red Sea. Experts suggest that Yanbu could overtake the top two refining hubs to become number one within the coming decade. “The Royal Commission’s long-term vision for economic development and diversification moves Yanbu industrial city beyond exporting basic chemicals and intermediates and to producing more value-added downstream petrochemical derivatives and converted finished goods,” Alaa Nassif, CEO of the Royal Commission at Yanbu, told TBY. According to the Royal Commission, megaprojects of over SAR10 billion are already in the pipeline for Yanbu’s development.

Meanwhile, downstream investments at Jubail in 2017 will reach a total of SAR12 billion, a figure that reflects a series of new projects launched by the Kingdom in 4Q2016. In total, there are 242 new industrial projects planned for Saudi Arabia’s industrial cities, a sector-wide investment plan that is expected to require over SAR215 billion (USD57.3 billion) to complete.

The Kingdom’s plethora of natural resources continues to create significant opportunities for the industry sector, with strong demand for metals and metal-based products burgeoning locally and abroad. Construction materials such as cement are also showing promise in 2017.

According to the government, priority developments within the minerals and metals processing segment include a flat-rolled aluminum mill to produce automotive, construction, and other sheet panels; a multi-purpose aluminum rolling mill for products such as wire, rod, foil, and packaging; an aluminum foundry to produce power train, wheel, and other castings; a steel foundry to produce pumps, valves, and other castings; copper processing facilities to produce copper and alloy rod, cable, tubing, plate, pipe, and sheet; metal processing facilities for forging, machining, stamping, heat treating, and plating; brass alloy production; and magnesium and zinc powder production.

Following the lifting of a cement export ban that lasted from 2013 to 2016, cement producers are eager to rejuvenate expansion plans. There are currently 17 cement-producing companies in Saudi Arabia, with an estimated 25 million tons of oversupply.

Rich in oil and gas resources, Saudi Arabia’s plastics and packaging sector has immense potential for further growth and development in terms of production volumes, product types, technological sophistication, and market expansion. According to recent reports, the petrochemicals segment contributes approximately 33% to industrial GDP and constitutes the majority of all non-oil exports.

NATPET operates a polypropylene plant in Yanbu with a production capacity of up to 400,000 metric tons per year on the west coast of Saudi Arabia. In an interview with TBY, Jamal Malaikah, President and CEO of NATPET, said “We chose this particular polymer product because there is high demand for it around the world—close to 62 million tons per year. Additionally, annual growth in demand is around 4%, or an additional 2.5 million tons per annum.” Polypropylene is used in industries such as automotive manufacturing, construction, packaging, healthcare, and home appliances.

Heavily dependent on metals such as steel and aluminum, high-grade plastics, glass, and land area needed to build integrated manufacturing facilities, the automotive industry is starting to pick up speed in Saudi Arabia. Local manufacturers are also increasingly able to capitalize on competitively priced utilities, oil and lubricants, and raw materials. The country has long been one of the largest car markets in the Middle East, benefitting from direct shipping routes to the mass automotive markets of Asia and the subcontinent, including prime connections by air.

Currently, there are at least 350,000 new drivers entering the Saudi Arabian market every year, primarily due to the young median age of the population. “There are at least 350,000 new drivers entering the market every year. Demand is rapidly growing; hence, we will look more into used cars and help extend the life of cars. More drivers mean people will start to target the affordable segment, and smaller cars will be the next automotive trend,” Majid Owaid Al Otaaibi, CEO of Takwa Group, told TBY. By Al Otaaibi’s estimates, the passenger car market will reach 15 million within 10 years.

The Kingdom has a variety of development programs underway to enhance the automotive sector, including a vehicle assembly project, with the aim of producing 600,000 vehicles a year by 2025. Also in the pipeline are tire factories, designed for both local and export markets and targeting production capacity of 8-10 million tires per annum. The government has also expressed interest in improving the quality of its output through R&D training.