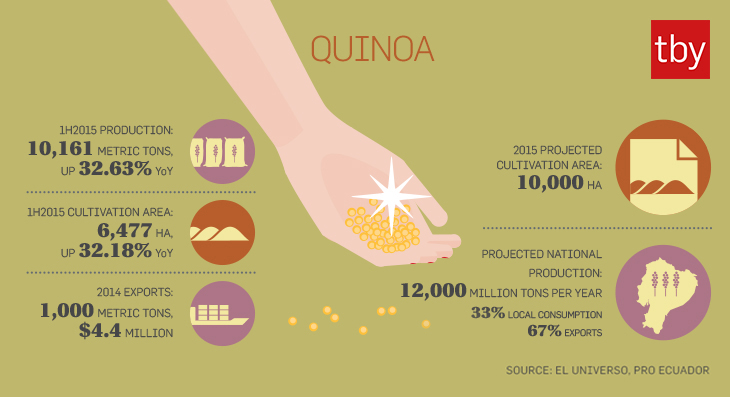 Share on:
Quinoa is becoming an increasingly consumed food product year after year, especially on the European continent.

Quinoa has been cultivated all along the Ecuadorian, Peruvian, Bolivian, Chilean, and Colombian Andes for 5,000 years. Along with the potato, it was one of the principal food elements of the pre-Inca and Inca civilizations. Quinoa has an exceptional balance in proteins, fats and carbs—mainly starch. It is also high in nutrients and easily digested. Traditionally, toasted quinoa grains are used to make flour, from which pasta, biscuits, and bread are made. It is also consumed in flakes or grains in granola, energy bars, and preserves. While its international popularity has been on the rise in recent years, local consumers did not always welcome this Andean treasure, which has repeatedly been named the “golden grain,” and was considered food from the indigenous communities.

The Ministry of Agriculture has actively tried to push the production of quinoa in recent years. Although Ecuador’s quinoa production is not as high compared to neighboring countries, it has a higher performance rate per hectare. In 2001, the Ministry and the United Nations World Food Program (WFP) started an initiative to include quinoa in the School Breakfast Program diet of the country, which feeds 2 million children in Ecuador every day. The Ministry has also launched different projects to boost quinoa production in provinces like Pichincha, Cotopaci, Carchi, Bolí­var, and Imbabura. In April 2015, the Ministry signed an agreement with the Ministry of International Trade to boost the relations between the ministries and the public and private sectors, most specifically the growers and exporters of quinoa, to improve production, commercialization, and added-value and innovation. For this, the Advisory Council of Quinoa will be created. Moreover, in July 2015, the II Business Roundtable of Quinoa was undertaken at the Ministry in an effort to procure direct sale agreements between the grower and the buyer. At the event, 1,265 metric tons of the grains were negotiated—equivalent to $2.2 million and $80/quintal.

The provinces with the highest quinoa production are Carchi with 38% of the production, Chimborazo with 25%, and Pichincha with 11%. In these provinces, quinoa is a driver of the local economy. The two varieties produced in Ecuador are “Tunkahuan,” which is sweet and low in saponin, and “Pata de venado,” which is organic.

Quinoa is considered a natural source of vegetal protein, and due to its high nourishing value, its consumption in European countries continues to increase. In July 2015, a 40-feet container containing 26 tons of quinoa was dispatched to Valencia, Spain, marking an incursion in exports to the Iberian Peninsula. However, in the Latin American region, due to its organic cultivation, this food tends to be acquired as a raw material by companies that value the nutritional content of the product. The Ecuadorian company Provefrut has diversified into the healthy food segment with bio-organic quinoa, which entered into production with their $1 million new production facility, Proquinua.

According to the Ecuadorian daily El Universo, production up to mid-July 2015 increased by 2,500 metric tons compared to the same period in 2014, achieving 10,161 metric tons. Furthermore, the area designated for cultivation has increased, from 4,900 ha in 2014 to 6,477 ha at the end of the 1H2015. Last year a total of 1,000 metric tons were exported for $4.4 million, and Pro Ecuador estimates that if Ecuadorians cultivate 10,000 ha by the end of 2015, there should be a national production of 12,000 metric tons, 4,000 metric tons for local consumption and the remaining for the international demand, leaving 8,000 metric tons available for exports.