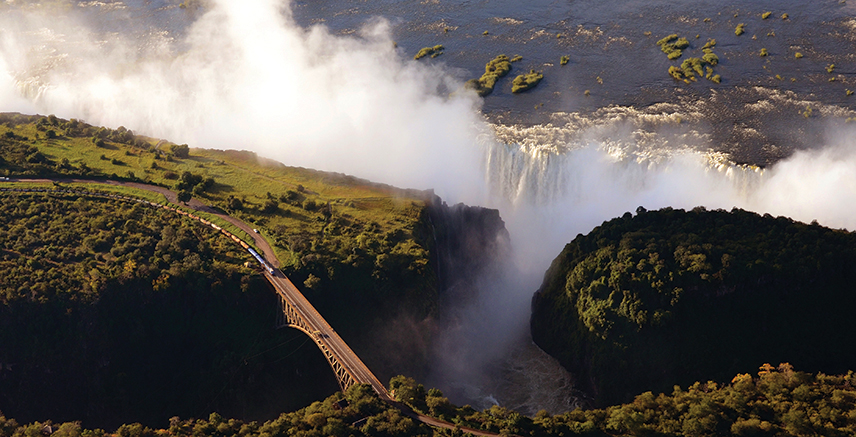 Share on:
Increased air transport options for Zambia and a more refined tourism offering is attracting a steadily rising volume of visitors.

Zambia has unrivaled tourism potential. From its world-famous Victoria Falls to vast nature reserves that cover 22.4 million ha, or about 30% of the country’s 752,614sqkm, its landscape and wildlife are complemented by a diverse culture and complex history, attracting visitors ranging from the anthropological sort to those who prefer to view wilderness through a rifle scope. As the global tourism market grows, Zambia is looking to establish its reputation, which is testing the financial commitment of the national government. For every dollar spent advertising the country as a tourism destination last year, South Africa spent $75, and even troubled Zimbabwe spent $5.42. With tourism to Southern Africa rising across the board, Zambia is ramping up efforts to attract tourists to its own attractions, with increasing success, thanks to the combined efforts of the Ministry of Tourism and Arts of Zambia (MTAz), the Zambia Tourism Board (ZTB), the Tourism Council of Zambia (TCZ), the Hotel and Catering Association (HCAZ), the Kafue National Park’s Livingstone Tourism Association (LTA), as well as the Livingstone Institute of Business Studies (LIBES), the South Luangwa Association (SLA), and the Zambia wild life Authority (ZAWA).

Bordered by eight other countries, Zambia is located in the heart of the region. The town of Livingstone—located next to Victoria Falls and close to the borders of Zimbabwe, Botswana, and Namibia—has the potential to be a hub for the regional tourism circuit. In addition, a growing number of Namibia’s visitors could be encouraged to make their way to Livingstone and other parts of Zambia, especially in light of the new multi-country visa regime which is now underway. The location of the capital city, Lusaka, halfway between the major airports of Nairobi and Johannesburg, could also help Zambia to benefit from established regional tourist circuits.

Recent developments within the industry on a national level indicate that tourism numbers are picking up on a long-term basis. A report in early 2014 by the Netherlands Center for the Promotion of Developing Countries identified Zambia’s relatively expensive visa policies as a deterrent to visitors, and also faulted the complexity of its process. By late 2014, Zambia introduced a universal visa called the KAZA visa, which will eventually be valid for other countries such as Namibia, Angola, and Botswana. A 90-day, single-entry visa can now be purchased at the port of arrival for $50. At some point soon, even more SADC countries are expected to sign on, significantly upping the appeal of the visa. Only months later, South Africa implemented a series of stringent new rules that demanded biometric data from some visitors—which naturally led to a drop in tourism that Zambia stands to benefit from.

Although thousands of miles away, last year’s Ebola crisis did little to improve Africa’s reputation as a tourist destination, especially among those less familiar with the multiple differences between countries such as Ivory Coast and Zambia. The reality is that as it develops, Zambia is becoming a safer and more accessible country. As of 2015, the WHO no longer requires yellow fever certification for visitors to the country. As a result, the TCZ expects the number of visitors to rise by more than 50% to 1.5 million. According to its Chairman Felix Mulenga, this influx of visitors will create employment for thousands of Zambians.

Yet another positive development worth considering was the establishment of three new routes by the country’s low cost carrier Fly Africa. These routes will serve markets in Zimbabwe and South Africa. With London-based Fast Jet also providing low-cost connections between Zambia and its neighbors, visits to the country are growing cheaper by the day.

The government realizes that an important share of tourism sector development will happen through international companies, and has set up multi-facility economic zones (MFEZ) to facilitate this process. One recently established MFEZ in Chambishi in Copperbelt province already had 43 foreign and local companies as of June 2015. Another MFEZ in Livingstone will emphasize tourism, and the government is moving a number of its regulatory and promotional bodies in the sector to the zone to make sure that companies have easy access to assistance

In addition to specialized zones, investors in the tourism sector are exempt from taxes on dividends for the first five years, in addition to however long it requires to pay off investments prior to dividends. For the first five years, tourism companies are not required to pay import taxes on capital goods, raw material, machinery, and specialized motor vehicles, as well as exemptions for various other forms of imported capital. The window to take advantage of these benefits extends from 2015 to 2020

Livingstone is the foremost destination within the country, both in terms of options and number of annual visitors. The government is promoting a resort-based vision for this part of the country where visitors have access to amenities that rival those in many developed countries, such as tourist accommodation, casinos, housing units, shopping facilities, roads, airports, and airport infrastructure, water, ICT, electricity, and other utilities. Livingstone also recently hosted the 20th United Nations World Tourism Organization (UNWTO) General Assembly in 2013, which precipitated heavy investment and tourism-related activity that drove up the region’s visibility as a destination, and attracted serious investment in roads, airports, and other infrastructure to the region. As of March 2015, the government was seeking partnerships to establish a tourism-related university in Livingstone, and is looking for other ways to develop the sector.

With 752,614sqkm of designated wildlife reserves, visitors to Zambia have plenty of choice, but South Luangwa National Park consistently ranks as the finest in the country, if not in the world. The Luangwa River, with its unique oxbow lagoons, attracts one of the largest varieties and number of wildlife in Africa. Although poachers ultimately wiped out the reserve’s rhino population, other rare wildlife species are thriving.

Kafue National Park is one of Africa’s largest game parks, measuring 22,400sqkm of wilderness. Its size and variety of terrain and foliage make it home to the largest variety of wildlife in the country. This park has limited amenities but plenty of activities such as safaris, boat cruise, and fishing. To address the lack of development in Kafue National Park—there are no real hotels, only lodges and camps—the government is actively soliciting private sector development in the area. However, this is partially reliant on its ability to drive up visitor numbers through promotions.

The Northern Circuit, which includes the Northern, Luapula, and Muchinga Provinces, parts of which are in the MFEZ, is another area where the government is pushing tourism development. While Zambia is technically a landlocked country, it has some of the most extensive water resources on the continent, and the Northern Circuit has enough lakes, rivers, and waterfalls to make it a destination for visitors who prefer the beach. The Tondwa Game Reserve for example, encompasses Lake Mweru Wantipa and has a long coastline with the world-famous Lake Tanganyika. Starting in 2012, the government began an ambitious development project for this region, providing funding for the development of feeder roads to connect tourist assets to major roadways. In the years ahead, the government will continue to fund public and private sector investment through necessary public infrastructure development, construction, rehabilitation, and the upgrading of infrastructure and utilities, often through public-private partnerships.

A strong knock-on effect on related industries is making tourism one of the fastest-growing sectors in the country. With a 2.7% ($658.6 million) contribution to the GDP in 2014, the industry is still much smaller than say, copper mining, which accounted for a 10% contribution to the GDP in 2010 and is expected to contribute $1.35 billion in 2015 according to the Zambia Extractive Industry Transparency Initiative (EITI). That said, tourism is quickly gaining on the mining industry, and is forecast to almost double within a year reaching 5.3% in 2015. Scaling up mining is harder to do. From there on out, the World Travel and Tourism Council (WTTC) predicts a 7.7% annual growth rate through to 2025, at which point tourism will rake in an impressive $1.46 billion per annum.

Total visitor spending is rising too, with the WTTC expecting it to more than double between 2011 and 2025. In real terms, spending for 2014 hit $182 million, with the expectation of a $10 million decline in revenues for 2015. By 2025, the WTTC projects that tourist spending will rise to $275 million. Tourist money has an incredible capacity to generate economic activity, and the total domestic expenditure generated makes tourists’ actual purchases look paltry by comparison. Internal tourist consumption, which combines tourist spending with internal consumption (the total revenue generated within a country by industries that deal directly with tourists including visitor exports, domestic spending, and government individual spending), reached $728 million in 2014. It is anticipated to reach $768.5 million in 2015, and by 2025, will stand at $1.55 billion.