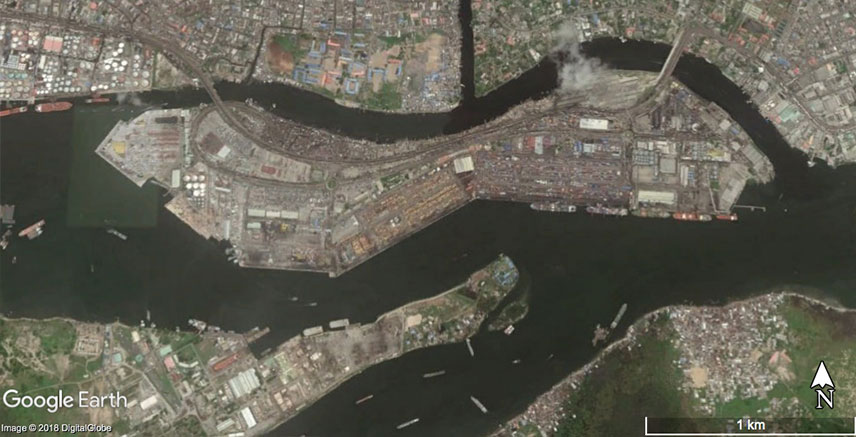 Share on:
Two woefully inadequate roads are hindering operations at the largest ports in Lagos.

It is rainy season in Lagos. Several times a week the skies darken and unleash a torrent of water. This water accumulates in vast puddles on roads across the city, causing frightening traffic jams and dampening commuters on the yellow and far-from-waterproof “danfo” buses that provide public transport across the metropolis.

However, there are two roads in Lagos that are more economically important, and in much worse shape, than the main highways that transport people. The entry and exit roads to Tin Can Island, the site of the largest ports in Lagos, and therefore the largest in Nigeria, are the single largest economic bottleneck in the country.

Potholes so vast they cannot be crossed even by a tractor-trailer fill with half a meter of water, drowning any hope for timely delivery of goods. Whole sections of road are reduced to nearly impassable mud. Smashed trucks and their parts litter the road, evidence of its treachery.

On the way into the port, endless lines of trucks wait days, or even weeks, to enter. Their drivers sleep on cardboard underneath the trailers, or in the ditch beside the highway. An entire economy of hawkers, barbers, cooks, and gangs has sprung up to exploit the predicament of the stranded trucks and their crew.

Nigeria is an import-dependent economy. It imports food staples, petrol and diesel, used cars, construction equipment, in short, almost everything. The massive cargo ships that call at West African ports arrive full and leave empty because of a lack of local industry.

What this means is that the port in Lagos, the largest city in Africa and the main driver of the largest economy on the continent, is crucial. It not only powers commerce and determines prices across Nigeria, but across the region, as goods imported through it are distributed by local traders over land routes. Its efficiency has a significant impact on the cost of living for millions of people.

Before 2006 Nigeria’s ports were owned and operated by the government. Cargo ships often waited over a month in port before offloading their cargo. Ship owners charged daily fees, vastly increasing the price of goods that came through the port. Things have improved since private operators took over, with offloading times as low as a single day.

Nonetheless, the roads to Tin Can Island, and throughout the port area known as Apapa, are in such dismal shape that they nearly undo the efficiency gains realized by the port operators who have invested USD2 billion in concrete, cranes, jetties, and quays.

It can take ten days for a single truck to pick up a single container in the port. It can take ten more for it to simply leave the port and embark on its battle with the traffic in Lagos and the surrounding areas.

There is no bigger single bottleneck on the country’s economy today, agrees Kunle Elebute, Senior Partner at KPMG Nigeria. By some estimates, as much as USD55 million passes through the port each day, a figure that would be larger still were it not for the abysmal roads. The road is not a new issue either. It has been in a similar state of disrepair since before anyone in the industry can remember. The World Bank has considered loans to Nigeria to fix it as far back as 1965.

However, there are signs of change. Three of Nigeria’s largest industrial firms, Dangote Group, Honeywell, and Flour Mills have received an approval from the federal government to rebuild the road leading into Apapa and to Tin Can Island. They plan to spend over USD25 million on the rehabilitation, and work has been underway since January. It is scheduled to be completed this June.

However, even if the road is fixed on time, it may be too little too late. Two other massive port projects are under construction outside of Lagos. One is the Chinese-backed Lekki Free Trade Zone. Another is the Badagry Megaport and Free Trade zone, backed by APM terminals and other investors.

Together, these projects could make Lagos’ port and operators obsolete. They offer delivery to Africa’s largest market without the expensive and time-consuming challenges of metropolitan Lagos.

In fact, they were conceived to avoid the current ports’ shortcomings, and they have both already begun construction.

The state of one of the most important roads in Africa is a symbol of the issues that plague Nigeria and the continent. Lagos is an old port city. When the Portuguese landed here in the late 1400s and gave the city its name, it was because of its excellent port. Today, despite all the progress that has been made, one single road removes income from the pockets of Africans in a thousand-kilometer radius. The fix seems so simple, and yet it still proves so elusive.