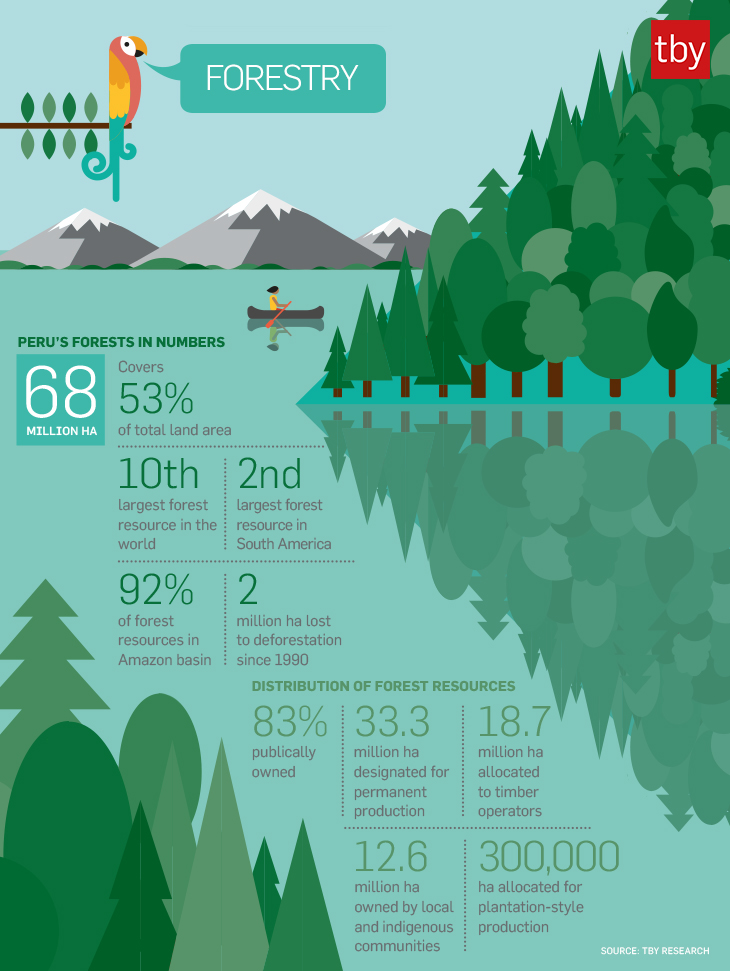 The Trees For The Wood

Share on:
Although coastal deserts and Andean plateaus are often the first landscapes that come to mind when many people think of Peru, the majority of the country's land area, around 60%, is actually in the Amazon rainforest, giving Peru the second-largest portion of the Amazon after Brazil.

In total around 53% of Peru, or 68 million hectares, is covered in forests, giving Peru the tenth-largest forest resource in the world, and the second-largest in South America after Brazil. The country was previously in ninth place globally, but fell to tenth after losing 2 million ha to deforestation since 1990. Around 92% of Peru’s forest resources are located in the Amazon basin in the northeast, near the borders with Colombia, Brazil, and Ecuador.

Around 83% of Peru’s forested lands are publicly owned, with the rest divided between private and communal ownership. Of the 68 million hectares of resources, around 33.3 million have been designated for permanent production, and of that total, a little more than half, or around 18.7 million, have actually been allocated to timber operators. Concessions have been granted to around 500 operators, with concessions averaging around 12,900 hectares each. An additional 12.6 million hectares belong to local and indigenous communities, and around 1200 indigenous communities have land rights to portions of the Peruvian Amazon. Plantation style production still makes up a very small portion of the forestry industry, accounting for less than 300,000 hectares.

Despite Peru’s immense forest resources, the foresty industry remains comparatively underdeveloped. Forestry accounts for just under 1% of Peru’s GDP, compared to Chile, which has only 16.2 million hectares of forests, but where forestry accounts for more than 3% of GDP. One of the major differences between the two countries is that the Chilean forestry sector relies much more heavily on plantation-style silviculture, while the majority of forestry in Peru is through long-term concessions, which is more labor intensive, but can yeild higher-quality types of wood and allow for more sustainably managed natural forests.

For Susana Albengrin of Santa Rosa & Madereras, the lack of plantation-style silviculture is holding Peru back from being a global leader in the forestry sector. In an interview with TBY she explained “we could be at the level of Finland, Brazil and Chile, all of which exceed [Peru’s] exports. They have replanted forests.” Albengrin added that Peru should “follow the example of Chile” and “develop its reforestation capacity” suggesting that “universities should be incentivized to invest in reforestation research”.

However, others in the sector feel that, rather than trying to emulate its neighbors, Peru should forge its own path by taking advantage of the higher-quality and less common species of wood in its natural rainforests, which can often fetch a higher price. Drago Bozovich, CEO of Maderera Bozovich explained to TBY that “comparing us to Chile is rather misleading as you cannot compare a pine plantation to long-term agriculture.” Bozovich added that “Peru will never produce GDP-wise billions of dollars of exports like Chile” and that instead the country should specialize in higher-quality wood products.