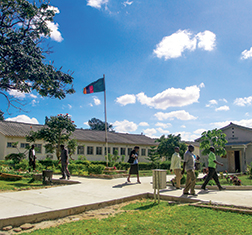 Share on:
The passing of former Patriotic Front leader Michael Sata in late 2014 necessitated early elections in January 2015, resulting in the appointment of HE Edgar Lungu as Zambia's new president.

The tragic passing of former President Michael Sata of the Patriotic Front came at a bad time for Zambia. After traveling to London in mid-October 2014 for a medical check-up, he died soon afterwards on the 28th in King Edward VII Hospital. Only half way through his mandate, his death left the country without an elected leader, and necessitated elections in early 2015, which will be repeated again next year as per constitutional requirements. While the country set about electing new leadership, its economy was shaken by a decline in copper prices that had enabled Sata’s party’s employment-focused and populist policies. Meanwhile, the kwacha slipped in spite of efforts to stabilize the currency

However, concerns over the political situation need not have been so pronounced. Zambian citizens attended voting centers despite widespread flooding and seasonal rains—a turnout of 32%—in January 2015, electing Edgar Lungu, who had served as Minister of Defense in the previous government, as the country’s new president. The former lawyer has largely carried on Sata’s policies, but has also been lauded for progressive policies on the death sentence and the selection of the country’s first female vice-president, Inonge Wina. The continuation of a Patriotic Front administration, in power since Sata’s first victory in 2006 in which around fifteen years of rule by opposition Movement for Multi-Party Democracy were ended, is indicative of the fundamental stability of the country’s political system. Lungu’s year of control will offer his government a brief opportunity to rectify the numerous economic issues facing the nation, within an established framework of parliamentary democracy which has been developing since formal independence in 1964The elections were tight; Edgar Lungu won 807,925 votes, or 48.33% of the total. The main opposition party, the United Party for National Development, which was the only legal party in the state from the early 1970s until 1991 under Kenneth Kaunda, won a total of 780,168 votes, or 46%, with its pro-business candidate Hakainde Hichilema. The formerly dominant Movement for Multi-Party Democracy and the smaller Forum for Democracy and Development both registered less than 1% of votes.

The Republic of Zambia is Africa’s 22nd most populous nation, with the majority of its 15.06 million citizens still living in rural areas. It has one of the highest birth rates on the planet, though low life expectancy largely related to the regional HIV crisis has created unique demographic trends. Its people speak over 70 different languages, the most widespread of which all belong to the Bantu family. Close to 80% of the population identifies as Protestant, with the bulk of the remainder worshiping as Roman Catholic, though many fuse these traditions with indigenous beliefs.

The original constitution promulgated in 1964 was superseded by the decisions of the Choma Commission in 1972, which enshrined the concept of a one-party participatory democracy in the country’s political system. UNIP stood as the sole political party, and its Central Committee was responsible for devising policy for the state. The president was elected by the party membership, while its secretary general would serve in a vice-presidential role. However, the long-term effects of depressed copper prices from the mid-1970s on, a sector in which Kaunda’s regime had placed much of its faith, combined with the unsuccessful nationalization of mines and the destabilizing influx of refugees from regional conflicts, led to popular disapproval of the prevailing structure. Riots in Lusaka and the threat of a coup d’etat in 1990 led to the drafting and acceptance of a new, multi-party constitution in the summer of 1991. Amendments were made in 1996, and since 2010 a number of versions of a revised constitution have been submitted for consideration. This situation remains unresolved in 2015, but discussions are ongoing.

As it stands, executive power in Zambia is exercised by the elected president, who serves up to two terms of five years. The president appoints the secondary position of vice-president, and their roles are supported by 23 ministers. An electoral commission oversees the popular selection of presidential candidates from any of the legal parties, provided they were born in-country.

The legislature takes the form of the unicameral National Assembly, which since 1991 allows for up to 158 members from diverse parties, and a speaker. Eight of these members are appointed by the executive branch. The rest are elected by popular vote using the first-past-the-post system, and go on to serve five-year terms, with the most recent elections held in 2011. Numerous by-elections have been held since then, but the next general elections will be held in 2016. On a local level, the country is divided into ten provinces, named Central, Eastern, Luapula, Muchinga, Northern, North-Western, Lusaka, Southern, Western, and the resource-rich Copperbelt. Each of these is individually administered by a Provincial Minister.

Justice in Zambia is based on both English common law and customary law. The judicial branch comprises the supreme court with nine judges including the chief and deputy chief justices, as well as the high court, magistrate’s court, and local courts. The Judicial Service Commission is headed by the chief justice, and counsels the president in his selection of the supreme court judges. Additional bodies such as the industrial relations court and subordinate court serve separate specific functions.

Prior to independence, Zambia was known as Northern Rhodesia, and was administrated for over a decade as a single semi-autonomous region together with what would become Zimbabwe and Malawi. Such historical connections and direct links with neighboring countries has led to a number of strategic bilateral alliances in the present day. Zambia is one of seven landlocked African countries in the Commonwealth, and is a member of numerous other significant international organizations, chiefly the SADC, COMESA, and the Non-Aligned Movement, for which independence leader Kenneth Kaunda served as Secretary-General in the early 1970s. Zambia has a permanent mission at the UN, as well as in Moscow, Tokyo, Brussels, Rome, Berlin, Pretoria, Ottawa, and Washington DC. Relations with the US are based around endeavors to eradicate poverty and the spread of HIV, as well as the strengthening of democratic transparency, while the EU has spent over $500 million on poverty reduction since 2008.

Naturally, Zambia’s relations with South Africa and other bordering nations are strong. Trade with its southern neighbor stands at around half of the total, and the country played a key role in supporting the African National Congress during the apartheid era. Since the beginning of the Angolan Civil War, Zambia has played host to a large number of refugees, over 20,000 of which still remain. In a recent gesture of good faith under Sata’s Patriotic Front administration, the Zambian government has pledged to grant residency permits or citizenship to around 10,000 Angolans who have fled to Zambia over recent decades. The country also hosts over 10,000 Congolese refugees, and significant numbers from both Rwanda and Burundi. Its most problematic relations have been with Robert Mugabe’s Zimbabwe. However, tensions have been lessening over more than a decade, with Zimbabwe accepting plans for the building of a direct bridge between Botswana and Zambia (on a disputed water border on the Zambezi River), and a number of significant diplomatic overtures over the course of the Sata administration.