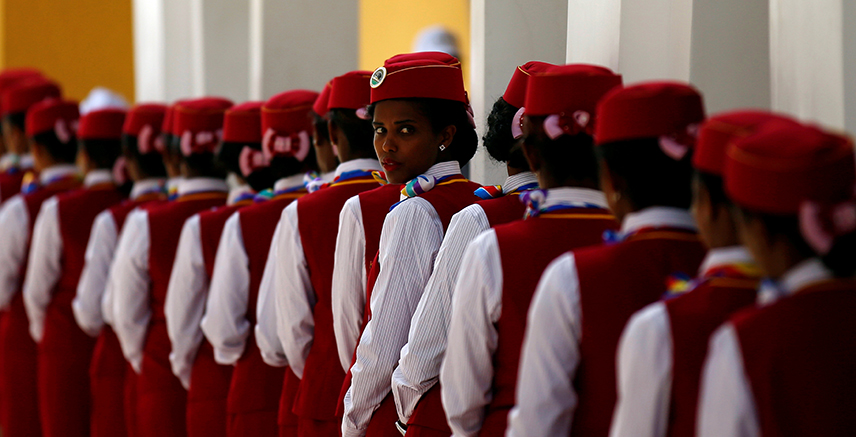 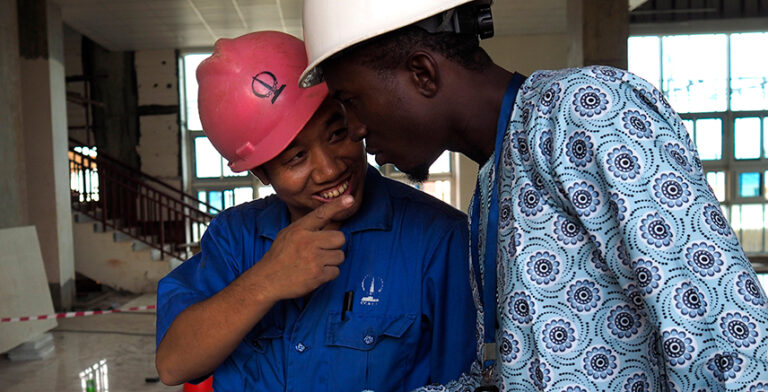 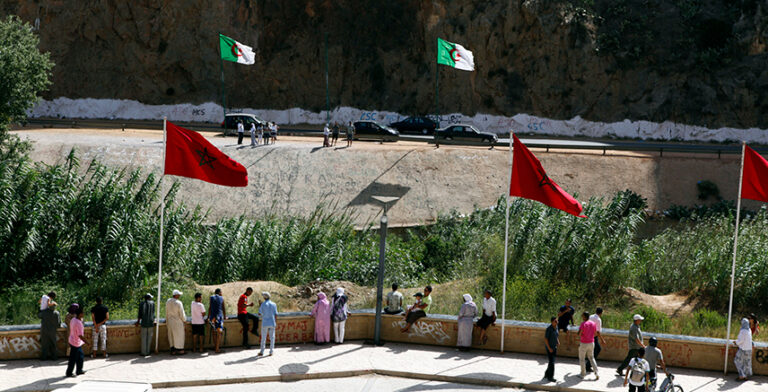 The Chinese megaprojects transforming the continent.

Stewardesses stand in line during the inauguration of the new train line linking Addis Ababa to the Red Sea state of Djibouti, in Addis Ababa, Ethiopia, October 5, 2016. REUTERS/Tiksa Negeri

During the last great age of globalization (1880-1914), the world was awash in ambitious infrastructure projects, many of which still define the contours of the world we inhabit: the Panama Canal, the Brooklyn Bridge, the Tran-Siberian railroad to name a few. Not all were intended for transnational use, but they spoke of a certain confidence and an unprecedented desire to bind the world together.

And just as Africa was always a draw for every dreamer, schemer, and colonizer of the 19th and 20th centuries, so too has it proven in the 21st.

Only this time around it has a new patron.

Gone are the explorers and legal impresarios from Lisbon, London, and Lií¨ge; in are the engineers from Guangdong and Chongqing.

These are ten of the most important projects that China is undertaking in Africa.

If successful, they will cement Beijing’s primacy on a continent the UN predicts will contain 40% of the world’s population by 2100.

A Chinese worker jokes with his Nigerian counterpart at the National Arts Theatre stop of the light rail system under construction in Lagos, Nigeria, May 30, 2014. REUTERS/Joe Penney

In one of the most ambitious infrastructural projects in Nigerian history, in July 2016 China and Nigeria agreed to build a 1,400km coastal railway from Lagos in the west to Calabar in the east, connecting the cities of Port Harcourt, Uyo, and Aba along the way.

This is but one of several ongoing Chinese contracts to modernize the country’s networks. In August, China Daily reported that CCECC had also signed a USD823 million project to build a 45km light-rail from the Nnamdi Azikiwe International Airport to Abuja’s Central Business District that is scheduled to be operational by December.

In the summer of 2017 Kenya unveiled its largest infrastructural project since independence (1963), an 80% Chinese-financed 472km railway from the country’s biggest port, Mombasa, to its capital, Nairobi.

At USD5.6 million per sqkm of track, the USD3.2 billion project went four times over budget and cost the government 6% of the nation’s annual GDP.

As things stand, only 5% of the country’s shipping is done via freight, a figure the new railway’s planners hope to push to 40% by 2025.

But the new line cuts travel time between the country’s two most important cities from nine hours by bus and 12 by existing rail to 4.5 hours.

Part of what will be a much larger East African rail network connecting landlocked Ethiopia, South Sudan, the DRC, Uganda, Burundi, and Rwanda to the Indian Ocean, the line is transforming transport in Kenya with economy class tickets going for USD9, less than the cost of the rickety 9-hour bus.

It connects the country’s heartland capital of Addis Ababa (elevation: 2,355m) to the nearest natural sea port in neighboring Djibouti on the Red Sea.

Essentially the same route as the original French-built line—completed in 1917 but inoperable as of 2009—it is the first electrified cross-border rail system in Africa, not to mention a vital access point to the sea for the landlocked country.

After all, 90% of goods entering Ethiopia pass through the ex-French colony of Djibouti, all of which have come by road since the rail’s closure in 2009.

However important the new rail, it represents but a fraction of Chinese projects in the country and its immediate hinterland.

In addition to building Addis Ababa’s USD475 million light-rail system and the African Union’s new Ethiopia-based headquarters for USD200 million, the Addis-Djibouti line comes just in time for what is arguably Beijing’s most significant post-Vietnam foreign adventure to date: the June 2017 opening of its first foreign military base, a 90-acre naval facility that will house up to 10,000 Chinese soldiers in Djibouti, just down the road from the new train terminus.

The Shenzhen of East Africa

Sino-Tanzanian relations have a long and storied history dating back to 1964 and culminating in the 1976 completion of the Chinese-funded Tanzania-Zambia railway (Tazara), the mother of all Chinese infrastructural projects in Africa and the third-largest infrastructural project ever undertaken in Africa at the time (after the Aswan and Volga dams).

Once the capital of German East Africa, it is better known for its 18th and 19th century ruins, but will be transformed when the port is opened in 2020.

Connected to Dar es Salaam and the Tazara line by rail, former Chinese ambassador to Tanzania Dr Lu Youqing said it could become the “Shenzhen of Tanzania.”

Part of the maritime element of China’s broader One Belt One Road (OBOR) strategy, it will service cargo to and from landlocked Uganda, Rwanda, Burundi, South Sudan, Ethiopia, parts of Zambia, and the eastern Democratic Republic of Congo, once China’s other regional rail projects are put into place.

People stand near a border post on the Algerian side of the Morocco-Algeria border in the north east of Morocco July 31, 2011. REUTERS/Youssef Boudlal

Another relationship with deep roots in the Cold War, China’s presence in Algeria dates to the 1960s. These days, with more than USD6 billion invested in the North African country since 2013, Algeria’s 35,000 resident Chinese are the second most numerous expatriate group after French nationals.

And their government has an even bigger vested interest.

The China State Construction Engineering Corp. has spent the last decade building the bulk of the monumental Autoroute A1, a colossal 1,200km east-west highway across the northern tip of the country from the Moroccan border to Tunisia.

Since man does not live by bread and transport alone, China is also helping build Africa’s largest mosque, the Great Mosque of Algiers. A USD5 billion project, it will be the third largest in the world, not to mention have the world’s tallest minaret, which, at 265m, will be six more than New York City’s Rockefeller Center.

With the continent’s second largest economy and third biggest population, Egypt also occupies a very strategic place in the OBOR scheme of things.

Far and away the largest recipient of Chinese investment in Africa, Beijing is estimated to have invested USD24 billion in the Gift of the Nile since 2013; the second largest, Nigeria, barely received a quarter of that.

Yet even these figures pale in comparison to the USD35 billion Beijing has so far pledged to build an entirely planned new capital city for Egypt in the desert east of Cairo.

With 700 sqkm of desert being roped off for the new capital—a vast inhabited stretch of sand nearly the size of New York City—the city is expected to require USD45 billion to get off the ground and will include smart villages, 1,000 mosques, and an Indian-financed medical center and university.

Work has already begun on the first 210km of roads. As yet unnamed, the city’s first phase is slated for completion by 2020.

In January 2017 China announced plans to invest in a Special Economic Zone (SEZ) in Pointe-Noire, the Atlantic port and oil-hub of resource-rich Republic of Congo, a nation of four million tucked between the much larger Democratic Republic of Congo (DRC) and Gabon.

With huge cuts to government revenues from falling oil prices since 2014, the country’s GDP has contracted for four consecutive years, leading to increased destitution and serious political unrest.

A disputed election in 2016 was followed by dozens of deaths and the displacement of 80,000 people.

As such, China’s announcement could not have come at a better time. When China’s top diplomat visited the country in January, he pledged his country’s full support in helping Congo-Brazzaville diversify away from oil.

As part of its extremely ambitious long-term plan to connect the Atlantic and Indian oceans by rail, the China Railway Construction Corporation Limited recently completed its Lobito-Luau line, a 1,344km schlep that goes right up to Angola‘s border with the DRC.

The long-term goal is for Lobito-Luau to link up with the Angola-Zambia and the Tanzania-Zambia railways, thus connecting two of the world’s three most important oceans by rail, a fate only achieved elsewhere by Amtrak.

Spanning 67 stops and 42 bridges, Angola’s fastest line broke ground in 2004 and was completed in 2015. Running parallel to the original Benguela line first built by the Portuguese in 1912, it marks the reconnecting of the country’s far east with Huambo, Angola’s second largest city, which was abandoned in 1975 at the onset of Angola’s 27-year civil war.

Northern Nigeria has not been the source of much good news in recent years, but the completion of a new Chinese-financed railway from Kaduna, the second largest city in the country’s north, to Abuja, its capital, was a welcome exception in the summer of 2016.

The 186km line not only gets up to 90km/hour, a 2.5 hour journey that vastly cuts the travel time between two of the country’s most important cities.

It is also part of a broader USD8.3 billion contract granted in 2006 to the China Civil and Engineering Construction Company (CCECC), the same firm constructing the Lagos-Calabar highway and the Lagos Rail Mass Transit System, to equip the entire Lagos-to-Kano line with modern standard gauge rail.

A crucial cog in the government’s ambitious plans to connect the tumultuous north with the rest of the country by more efficient means, the government may find its legitimacy more contingent on Chinese ingenuity and timeliness than they’d imagined in 2006.

Africa’s most sophisticated economy is already thought to be home to between 350,000-500,000 Chinese migrants, many of whom flocked to the country to help cater to the consumer tastes of its rising middle classes in the decades following the end of apartheid.

Though insecurity and a plummeting rand have given individual entrepreneurs pause, Chinese capital is still very keen on the country.