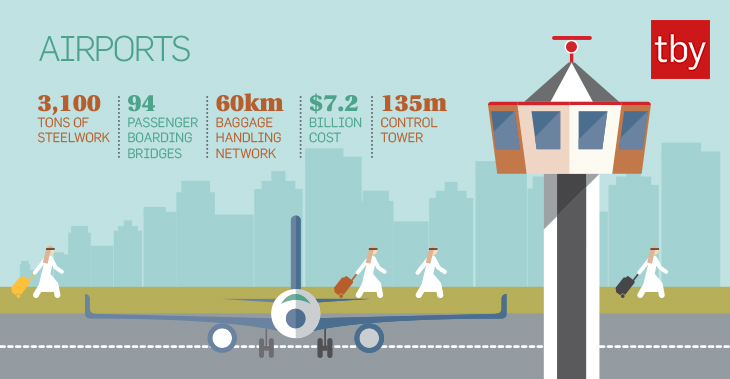 Share on:
Just four of Saudi's airports account for 90% of passenger traffic in the Kingdom, although a number of other airports are bringing balance to this.

Saudi Arabia is in the midst of a new wave of airport construction and dramatic renovations throughout the country, highlighted by the $400 million Terminal 5 project in Riyadh and the New King Abdulaziz International Airport project in Jeddah. Both projects, which will dramatically increase the connectivity and air traffic capacity of KSA’s two largest cities, are set to be completed by the end of 2015 or 2016. Elsewhere across the country, new plans recently revealed by the General Authority of Civil Aviation include airports in cities such as Jazan, Abha, and Arar. Although smaller airports throughout the Kingdom are gradually increasing their capacity and traffic, four of Saudi Arabia’s international airports—Riyadh, Jeddah, Dammam, and Medina—still account for over 90% of the country’s total passenger load.

Riyadh’s King Khaled International Airport Terminal 5 is a major $400 million expansion project currently being undertaken by Turkey’s TAV Construction. With a project delivery time of only 18 months, Terminal 5 reportedly surpassed the 50% progress rate in 1Q2015. Initially, the Terminal will exclusively serve domestic passengers to ease the burden on the other terminals. After two years, it will shift entirely to an international terminal.

Beyond the terminal itself, TAV is also constructing a 90,000sqm parking facility that will have the capacity for 3,000 vehicles. Other auxiliary facilities include a building for the fire brigade, an operations center, power station, as well as new infrastructure to integrate Terminal 5 with the airport’s other terminals. Terminal 5 is TAV’s third tender in Saudi Arabia, after previously completing the aircraft maintenance hangers in Jeddah and the Medinah International Airport, making it an established player in the country’s gradual airport and aviation privatization process.

King Khaled International Airport handled roughly 18 million passengers per year since 2012, well over the official capacity of 12 million. The completion of Terminal 5, together with the rehabilitation of terminal 4, could push this number up to 35 million a year. These additional passengers will also be aided by an eventual connection to the ongoing Riyadh Metro project.

In Jeddah, while the $7.2 billion New King Abdulaziz International Airport project is technically an expansion of the existing airport, the sheer size and ambition of the project is more than enough to warrant the moniker. Already the main gateway for millions of annual pilgrims visiting the two Holy Mosques in Medina and Mecca for Hajj or Umrah, the New King Abdulaziz International Airport is a key component of the government’s larger plan to transform Jeddah into a true regional powerhouse.

The project has a master plan extending to 2035, split into three phases that will see passenger capacity targets of 30 million, 60 million, and 80 million per year. The first phase, which is expected to be completed in 2015, includes a new 690,000-sqm terminal designed by Aktins and Arup, Areen Design (interior), and constructed by Saudi Binladen Group. Other civil works and related infrastructure contracts were awarded to Al Mabani General Contractors and a joint venture between Saudi Oger and Murray & Roberts. The plans also include an iconic control tower, which at 135 meters will be the tallest in the world. Eventually, the new KAIA will be linked to high speed and light rail networks, firmly establishing it as the major transportation hub of the region.

By 2035, the new KAIA will be the centerpiece of Airport City, an innovative concept to build upon the airport’s transportation importance and developing the surrounding land with leisure, educational and commercial centers, as well as hotels. The first phase will only include 100ha of this development, with a projected area of a whopping 1,200 hectares by the completion of Phase III in 2035.