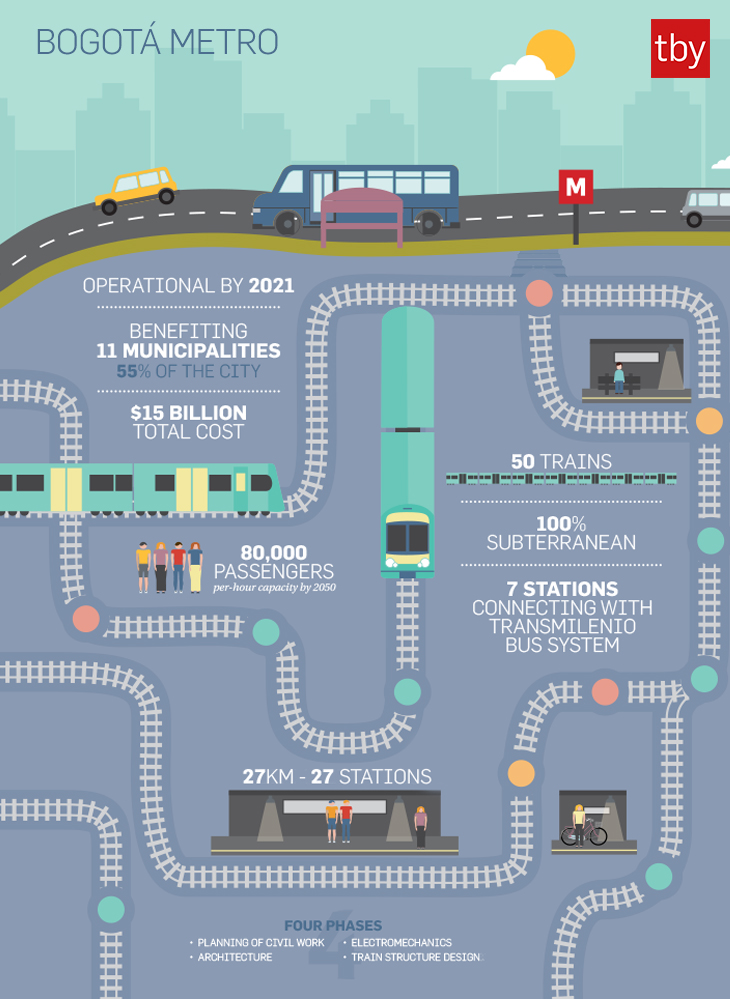 Many were surprised when Simón Gaviria Muñoz, Director of National Planning (DNP), announced that the Bogotá Metro would be included in the National Development Plan from 2015-18. The exact amount allocated for the metro has not been confirmed, but comprises part of the $62.2 billion budget for investment in national infrastructure during the four year period of Santos’ second term, a 3% rise on his first term.

The debate concerning the physical and financial viability of the Bogotá Metro has been ongoing since the project was first considered in the 1950s. The need for better public transport infrastructure is growing in line with the exponential growth of Bogotá’s urban population, and intra city and municipality traffic.
The initial tender was awarded for advanced engineering studies in 2014, focused on the main metro line, that would run over 27km over 27 stops from the north of the city to the south west. The system is part of Bogotá’s Integrated Public Transport System (SITP) master plan. Seven of the stations will be interconnected with the Transmilenio, and it will be 100% subterranean, with electronic tractions system with 50 trains towing seven carriages apiece.

The advanced engineering phases of the metro fell into four distinct phases, the planning of the civil work, architecture, electro-mechanics, and the physical design of the train structure itself. In addition to the main metro line, the master plan includes an additional 130km of rail connecting Soacha, Facatativá, and heading out toward Bogotá’s adjacent municipality of Chia.

In 2015 the competition for the construction tender began in earnest, and it includes several of the world’s leading multinationals in electro mechanics and public transport systems. The initial financial structure proposed by the DNP was 70% state funded, and 30% by the Bogotá municipality. The cost of the work was valued at $15 billion, which has led to the heightened possibility that the projects will be constructed by APP, and that the Colombian public would effectively finance 20-30% of the megaproject in order to make it more viable.

The DNP indicated that by June 2015, following the final financial structuring studies, it would be clear how the megaproject would be financed—that is, whether it would utilize the PPI model or not. The DNP schedule concluded that the operation would potentially be completed by 2021, and that 11 municipalities would benefit—around 55% of the city, and that the system would have the capacity to transport 45,000 passengers per hour, before ramping this up to 80,000 in 2050. It would cost an estimated $3 billion, of which the state would front 70%.

The enormous social net benefits of the metro are hard to ignore. A recent cost-benefit study undertaken by Instituto de Desarrollo Urbano (IDU) concluded that the construction of the metro line would result in net social benefits of $45 billion, significantly outweighing the $15 billion cost. These social and monetary savings are mostly due to time saved during commutes, and a reduction in illnesses, injuries, and deaths caused by the current systems’ pollution and dangerously overcrowded roadways.