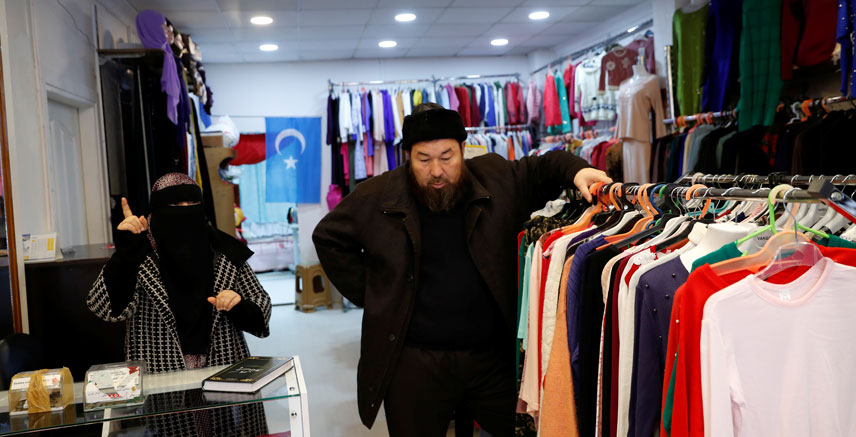 Seyfullaz Niyaz and his wife Mahdiya are seen at their women’s clothing store that sells Mahdiya and her daughter’s designs in Istanbul, Turkey, January 12, 2019. “Uighurs are hardworking and talented people. We want to live in Turkey without having to depend on anyone,” Mahdiya said. REUTERS/Murad Sezer

Branches of Turkish clothing retailers such as Mavi, LC Waikiki, Koton, and DeFacto have become a familiar sight in highstreets throughout the country, while iconic streets such as Istanbul’s Istiklal Caddesi in Istanbul are now dotted with such clothing chains.

Once inside the sore, a shrewd observer will realize that many shoppers, especially in touristic cities, are foreign visitors who are bulk purchasing everything ranging from T-shirts to leather jackets, with only a few locals browsing for clothes.

This fondness for affordable Turkish clothes is not limited to any nationality; tourists from Europe, Africa, and the Middle East all seem to have an urge to stock on Turkish pullovers, trousers, ensembles, and footwear—import tax free—while they have the chance—and for a good reason.

Turkey is currently the 3rd largest exporter of clothes to the EU, and its exports rule the market across the MENA region.

In 2017, clothing accounted for 9.4% of the country’s export, while the export of knitwear, alone, generated a staggering USD8.8 billion for the Turkish economy.

Since the 1990s, the country’s clothing brands have become hugely popular across the world, thanks to the balance that Turkish manufacturers have struck between affordability, quality, and stylishness.

This latter feature may be the Turkish fashion industry’s real winning card in competing against southeast Asian manufacturers.

Most Turkish brands also seem to capitalize on this unique selling point.

With 922 stores in 45 countries—as of April, 2019— LC Waikiki says that its business philosophy boils down to “everyone deserves to dress well,” and the company is aspiring to become “one of Europe’s three most successful apparel retailers by 2023.”

Koton, another Turkish apparel retailer was founded by Gülden Yılmaz, and operates over 380 stores across Turkey in addition to having overseas branches in over 24 countries. According to Yılmaz the clothing retailer has experienced a 70-fold growth in turnover between 2000 and 2014, and is hoping to become a truly global brand soon.

Mavi may be one of the most successful Turkish brands in going international. With flagship stores in US and European metropolises, the jeans brand is known to employ the services of international supermodels and actors in its promotional campaigns. However, Mavi’s collections come at lower prices than most Western brands.

The Turkish brands’ competiveness is not difficult to understand. Over the years, the country’s deep-rooted textile and apparel sector has accumulated a great deal of industry know-how, and—thanks to Turkey’s proximity to Europe—Turkish designers have developed an awareness of Europeans’ preferences in apparel aesthetics.

Figures such as Barbaros Åžansal, Bora Aksu, Atıl Kutoğlu, Rifat Ozbek, and Hussein Chalayan who learned their craft in European studios and fashion weeks may not have directly contributed to their home country’s affordable clothing industry, but have inspired a younger generation of Turkish designers.

And, the industry is perfectly aware of the value of young talents. The Koza Young Fashion Designers Competition was launched in 1992 by the Made Garment Exporters’ Association (IHKIB) to give young Turkish designers a platform for to showcase their capabilities. The winners will also receive assistance to study design in well-known fashion hubs such as Paris, London, or Milan in addition to the prize money.

The organizers of the Koza event are proud to say that many of their finalists now “manage the design departments of the most important fashion brands,” or have launched their own brands. Ezgi Karayel won the competition in 2018 because of her eye-catching collection which was inspired—of all things—by Stanley Kubrick’s 1971 hit, A Clockwork Orange.

In addition to rising talents, the country’s textile and apparel industry draws on amiable relationships with Europe. In 1996, Turkey entered a customs union agreement with the EU, which made the two very close trade partners in all areas including clothing.

And, maintaining healthy relations with Europe will be essential for the industry’s future and is the Turkish apparel sector’s biggest advantage over China.