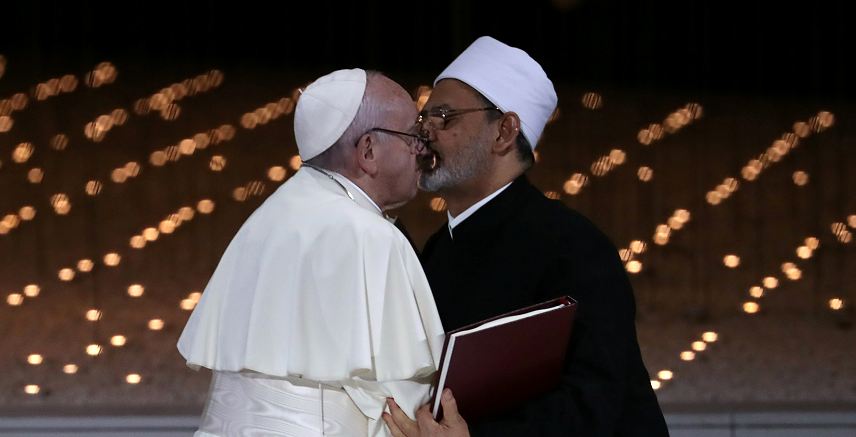 Share on:
In early February Pope Francis visited the Middle East for an interfaith Fraternity Meeting in the UAE with Sheikh Ahmed al-Tayeb, the Grand Imam of al-Azhar in Egypt.

The event was reminiscent of a 13th century meeting of St Francis of Assisi with then Sultan of Egypt Malik al-Kamil, in that it took place at a time of perceived animosity between the two faiths.

Having initially won the ear, and ultimately the heart of the Sultan, when leaving for home St. Francis seemingly shunned all gifts bestowed upon him save one. The ivory horn used by the muezzin in the call to prayer, which he then used to summon his own native flock.

Animosity and suspicion run deep between communities of both faiths, with religion politicized to divide, rather than console.

It is this that the two principal protagonists have sought to set aside in the interests of humanity and peace. And at the meeting, Sheikh Ahmed al-Tayeb declared that Christians are “our companions.”

Notably, too, he urged Muslims living in the West to integrate into their host societies, while preserving their identities.

Beginning poignantly with the Arabic appellation “As-salÄmu alaykum!” or “Peace be with you,” Pope Francis appealed for efforts to end conflict blighting the Middle East, stating that he, too, had arrived thirsting for peace.

In the spirit of creating one unified human family, he then delivered a poignant appeal. “Together, as brothers and sisters in the one human family willed by God, let us commit ourselves against the logic of armed power, against the monetization of relations, the arming of borders, the raising of walls, the gagging of the poor; let us oppose all this with the sweet power of prayer and daily commitment to dialog.”

The sentiment shared at the meeting was that the Creator cannot be honored without acknowledging the sanctity of every human life, that to recognize equal rights for all people was to glorify the name of God, and that violence could never be justified in the name of religion. Fraternity, he stated, meant acceptance of diversity. This is contingent upon education, where knowing thyself only carries weight when also knowing your brothers and sisters, their cultures, histories and faiths.

Pope Francis took pause to comment on the remarkable transition of a region once solely an inhospitable desert. He praised “farsightedness and wisdom” for today’s prosperity, and for the country’s status as a friendly meeting place of cultures and religions, as well as of burgeoning commerce. Yet in a cautionary tone he also cited the desert as metaphor for the dangers of human indifference and aimless materialism of the modern world.

In calling for a demilitarizing of the human heart, the message delivered by both figures can perhaps best be encapsulated in a single image, that of the dove of peace. Peace that as Pope Francis stressed, flies on the wings of education and justice.