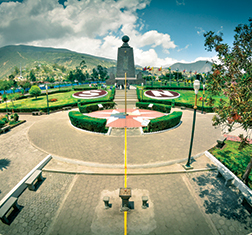 Where North and South Meet

Share on:
Located 15km from Quito at 2,483m above seealevel, Ciudad Mitad Del Mundo [Middle of the World City] is the largest touristic, scientific, and cultural development in Ecuador, devoted to the […]

Located 15km from Quito at 2,483m above seealevel, Ciudad Mitad Del Mundo [Middle of the World City] is the largest touristic, scientific, and cultural development in Ecuador, devoted to the country’s indigenous ethnography and commemorating its location on the equator. The 5km-wide equatorial line divides the earth in two equal north and south hemispheres, and due to physical forces such as rotation, translation, and nutation, the position of 0º0’0” moves within the 5km throughout the year. On approximately June 21st each year, the 0º0’0” position passes over the yellow line that represents the equator at the Equatorial Monument, which also represents the extraordinary adventure of the French Geodesic Mission, whose members set out to confirm the Earth’s shape. The committee resolved to measure South America, thanks to the wise suggestion of Ecuadorian scientist Pedro Vicente Maldonado, and also established the meter as the universal length measurement.

Mitad Del Mundo represents the beauty of being Ecuadorian through its art, culture, traditions, mysticism, and ancestry. Its construction began in 1979, and has been opened to the public since 1992. In just one day, you can enjoy the cuisine, history, culture, and the most important touristic characteristics of this global paradise. Mitad Del Mundo’s main attraction, the Equatorial Museum, spans the nine floors of the Equatorial Monument. You can enjoy a unique scenic view of the Equinoctial Valley from the sphere of the monument lookout point, journey through Mitad Del Mundo’s history and its changes over time, explore the four environments of Ecuador’s regions, and learn about the scientific facts related to the equatorial area. On the ground floor, discover an interactive world with a sensory cinema, holograms, virtual scenes, educational video screens, and a photomontage room.

With the arrival of the new management to the Mitad Del Mundo, a new strategy was implemented to boost the city as the leading tourist attraction in Ecuador. Therefore, the renovation of existing attractions and the creation of new destinations are hoping to increase the number of visitors per year. Giovanny Camacho told TBY that since he became General Manager of the Mitad Del Mundo, the number of visitors increased from 550,000 to 750,000 visitors per year, just over the course of nine months. Some of the new featured attractions that will open in the 2Q2015 are the Chapel Museum, where you can experience art, culture, and tradition through an exhibition of the chapels of Ecuador’s capital city and Cultural Heritage Site, Quito. The Touristic Train travels through the Mitad Del Mundo and its history, abroad a replica of Ecuador’s railway. Finally the Cacao Plaza will show Ecuador’s fine and flavorful cacao, where you can learn cacao’s true place of origin and its role in Ecuadorian history, along with its industrial history, varieties, and production.

Apart from these, Mitad Del Mundo is comprised of pavilions that show the diversity of Ecuador, its cultural richness, and how the country has transformed until the present. The Colonial Quito Pavilion displays miniatures and a scale model of the Historic Centre of Quito, Cultural Heritage Site. The French Pavilion is a collaboration between the French Embassy and the Mitad Del Mundo Public Enterprise. This pavilion’s exhibition describes the contributions of the first and second French Geodesic Missions. The Guayasamí­n Pavilion shows the life, labor, and artistic works of the world-renowned master painter and sculptor Oswaldo Guayasamí­n. Finally, the Ecuador Pavilion shows a photographic exhibition of the highest summits of the world by the Andean photographer Patricio Tisalema. The city also has a planetarium and a specific area for young tourists called “Chiquitos.“

There is little doubt that the Mitad Del Mundo, with the help of Pichincha’s Government, will attract more tourism to a city that has not yet begun to achieve its potential until now. Marcela Costales, Vice Governor of Pichincha and Chairman of Mitad del Mundo said, “I think there are some key projects, alongside our own, that will better position the city on the international tourism and cultural circuit. Meanwhile, we are also developing projects to further promote surrounding neighborhoods and areas in the tourism arena.“