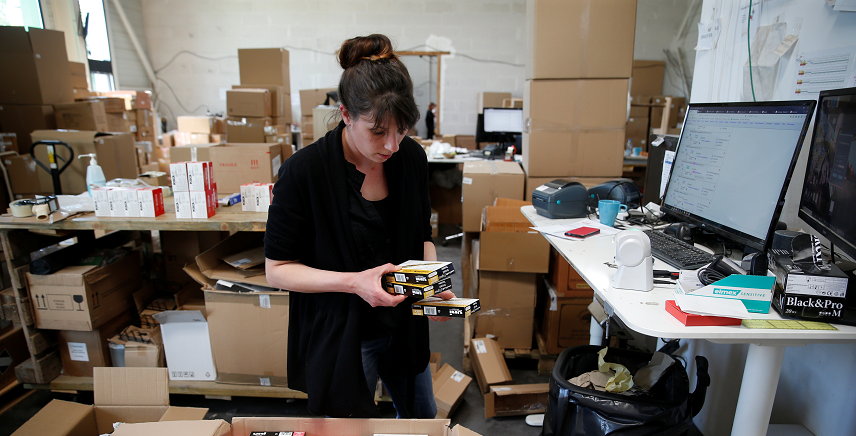 Share on:
While much of the global economy implodes, a select coterie of e-commerce, retail, telecoms, and entertainment giants are thriving as never before.

While many fortunes were lost in late February and early March, several important ones were also made, or at least, enlarged.
Zoom, for example, which was founded in 2011 but didn’t launch its IPO until 2019, shot up from roughly USD65/share, where it traded for most of Q42019, to a peak of USD159 on March 23.

Though it has since wobbled a bit and come down to USD143, it has still managed to double its founder Eric Yuan’s fortune to roughly USD7.4 billion in the past two months, bringing Zoom’s total equity to USD35 billion.

That is, of course, on paper.

For the San Jose-based video communication company, which has grown from 10 million users in January to over 200 million by late March, has yet to determine how to manage this explosive growth, much less monetize it (normal subscribers pay USD15/month for the service, which virtually none of its new users are). While it is clear that video conferencing will be a larger, possibly essential, part of our lives going forward, this doesn’t mean it will be monopolized by Zoom.

Not only is it already generating competitors such as RingCentral; part of what allowed its meteoric rise—the lack of passwords to enter a zoom meeting—has also been one of its greatest downsides: the introduction of “zoombombing” where intruders hack into a call to disrupt it.

Zoom also leverages third-party cloud infrastructure such as Amazon Web Services and Microsoft Alure, which means that many of the firms enjoying a boost in popularity must still rely on larger internet and data giants to pry their fortunes from the grip of a recession-bound global economy.

For established internet and e-commerce giants such as Amazon it is business as usual. CEO Jeff Bezos’ net worth has increased by more than USD24 billion to USD145.6 billion, and the company’s stock has surged from USD1,847 on January 1 to a peak of USD2,408 on April 16. Though it has since come down to USD2,328 and has also shown some volatility, the company is still far and away the greatest winner in the US economy.

Hiring an additional 100,000 workers in the four weeks following March 12, the company announced plans to hire another 75,000 on April 13.

The other most obvious winner over the past two months has been Netflix. With vast swathes of the globe stuck at home, many millions of whom are also now out of work, it is unsurprising that Netflix’s first quarter growth should have exceeded expectations.

Signing 16 million new subscribers up in 1Q2020 alone, twice the amount expected internally and by Wall Street, Netflix released its quarterly earnings on April 21: USD5.77 billion. Though resounding, this was impressively on par with Wall Street predictions of USD5.74 billion, meaning Netflix’s earnings per share, at USD1.57/share, was slightly less than expected (USD1.64/share).

That, of course, is largely due to the fact that its stock has shot up by over 35% this year, from USD300 on New Year’s Eve to USD434 on April 22. Propelled by new hits such as Tiger King, Love is Blind, and Waco—none of which are good cultural signs for the future of American empire—and new seasons of old favorites such as Narcos: Mexico, Ozark, and Elite, Netflix helped boost its total paid subscribers to 183 million.

The only downsides to this extraordinary growth are the strength of the US dollar, which pulls on international growth, and the fact that all current Netflix production is in shutdown. There are also concerns about how much “churn” or cancelled subscriptions will come in the next few months as those out of work begin curbing discretionary spending, or simply go back to work.

In the last stretch come the retail giants supplying much of the milk, eggs, toilet paper, and peppermint patties to hundreds of millions stuck at home since early March. As the world’s three largest retailers, Walmart, Costco, and Kroger have seen their combined shares increase by 11% in 1Q2020.

Already accounting for 9% of consumer retail spending in the US, Walmart has been cleaning up since the beginning of the

Shares are trading at 24 times the company’s estimated 2020 earnings, and Walmart’s stock has risen to USD129/share after hovering around USD115 for most of January-February. The company’s owners, the Arkansas-based Walton family, has seen its net worth increase to USD169 billion, making it the wealthiest family in the world.

But drops in discretionary spending have hit other major retailers such as Target, whose stock has lost 15% this year. The other fear for major retailers like Costco is that limiting the number of customers that can enter stores at any given time will dampen in-store purchases.