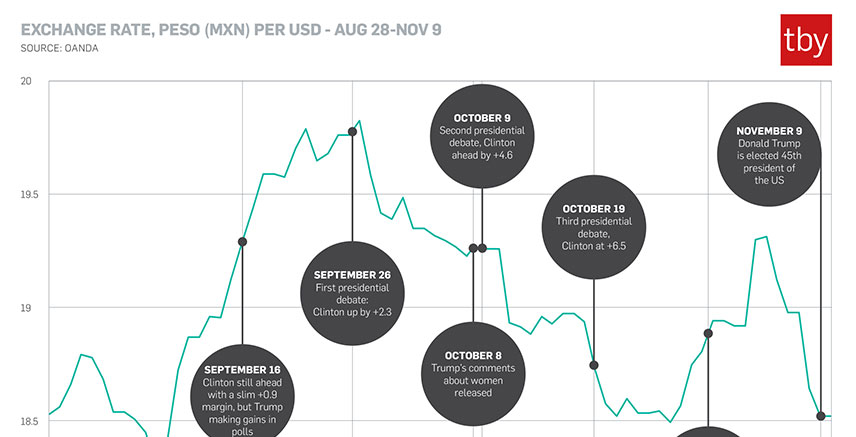 Who will win the US election? Ask the Mexican Peso

Share on:
The rising and falling popularity of US presidential candidates is reflected beyond the country's borders.

For those following this year’s US election race, the Mexican peso has emerged as an excellent tool for gauging the popularity of both presidential candidates. Over the past three months of the campaign, Mexico’s currency has experienced considerable fluctuations, shifting broadly in parallel with Trump’s popularity level.

As the GOP nominee’s poll numbers have improved, the value of Mexico’s peso has decreased and vice versa.

The possibility of a Trump presidency could endanger Mexico-US trade relations. The conservative leader has persistently denigrated the NAFTA free trade agreement, and has contended that Mexicans are taking US jobs. As a result, investors have increasingly sold off their pesos as the likelihood of a Trump presidency has increased.

So far in 2016 the peso has fallen by approximately fallen 10% against the USD. From around 17.20 to the USD in January to about 18.86 by late October, the worst period for the currency was August and September, the months when Trump’s star was most clearly on the rise.

According to RealClearPolitics, a website which aggregates polling data, support for Trump soared between mid-August and September 16, when Clinton’s had just a slim 0.9 margin ahead. In that period, the value of the peso fell and a dollar rose from 18 to nearly 20.

Then in the last days of September and early October, controversy over his tax returns grew, putting his candidacy in jeopardy. As a result, Trump began polling worse and consequently the peso gained ground.
In the days following the Washington Post’s publication of the video of Trump making lewd comments about women, the peso revalued.

On October 2 polls gave Clinton a lead of 2.5 percentage points, but by October 18 that advantage had widened to put her 7.1 points ahead of Trump. Between those same dates the peso dropped from 19.4 to 18.6 to the USD.

Last week the FBI announced that it would reopen the case on Clinton’s email server, just 11 days before the election, in a decision which has had serious effects on her candidacy. As of October 31, the Democrat was only polling at 3.5 percentage points ahead, and as expected the peso has fallen against in response.

The elections will take place in less than week, and precedent suggests that opinions could change much before then. But if political analysts want a clearer idea of how the two candidates are polling at this critical juncture they have only to look to the MXN:USD exchange rate.