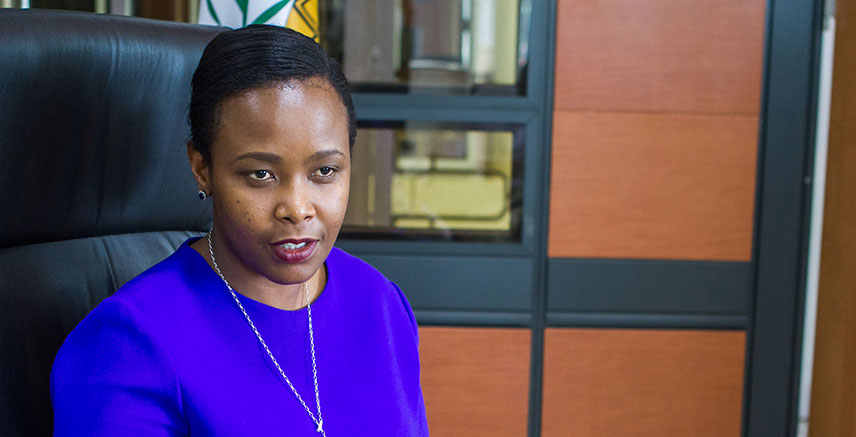 Clare Akamanzi, the Chief Executive Officer of the Rwanda Development Board, speaks during a Reuters interview in Kigali, Rwanda May 11, 2018. Picture taken May 11, 2018. REUTERS/Jean Bizimana

The #MeToo movement and other women’s organizations lobbying for equal rights and better opportunities in both social life and the workplace have swept global political debate in recent years.

Despite the fact that the rights of women are inscribed in law, as they have been for many decades in most parts of the Western world, a renewed awareness of underlying gender-based discrimination in social and professional environments has emerged.

Challenges persist to a great extent with the “pay gap,” discrimination against women with regard to promotions and access to careers, as well as with social pressures and taboos that still play a significant role in stopping women from pursuing their dreams and ambitions.

However, across the world new habits and conventions, as well as laws, are changing that reality.
In emerging markets in particular we are seeing the most unlikely yet promising developments for the improvement of the position of women in the world of work.

Rwanda is one of those places.

After a devastating civil-war-turned-genocide in the early 1990s, the landlocked African nation was in pieces. Poverty, malnourishment, and a lack of education and healthcare were a constant, and the country was thrown into a unique situation with regard to gender relations.

The genocide affected all but killed mostly men, leaving Rwanda with a population that was 60-70% female.

A traditionally male dominated society, it saw itself without the human resources to sustain the overall dominion of men in most economic sectors, which allowed for a rise in the representation of women in society and the economy.

This happened both by chance and design, as President Kagame has been pushing for female rights in the country since the early 2000s, having realized that a female workforce would be a fundamental pillar of the country’s economic revitalization.

The result? Today, Rwanda has the world’s largest female representation in parliament, and women occupy key positions in public services, law enforcement, the legal sector and, increasingly, in tech-related fields.

These areas had previously almost exclusively been dominated by men.

One particular example of this shift is the Ms. Geek contest, a sort of beauty pageant for brains which takes place in Rwanda.

As part of the event, women from across Africa are judged by their ability to come up with innovative and disruptive technological projects.

May 2018 marked the 5th anniversary of this event.

The winning participant, 21 year old Salissou Latifa from Niger, presented a mobile app that helps communication between emergency health services and people caring for trauma victims. These and other events and organizations are progressively changing the idea that information and communication technologies, computer science, and engineering, among other fields within the STEM spectrum, are not meant for girls.

Furthermore, they serve the important social function of promoting role models within these fields for future generations of women to follow and be inspired by. With these successes, new computer science degrees are filling up with more and more young women, a clear example of a project having a positive social impact.
However, Rwanda is not the only example of an emerging market in which women are progressively taking over men’s traditional preeminence in STEM fields.

Myanmar, with all its socio-political divides, has a surprisingly high percentage of women studying ICT in university.

In fact, according to a study by the Council of Foreign Relations, students at the Myanmar Computer University are 60% female.

As a point of reference, according to the European Data Journalism Network, only 16.7% of ICT specialists in the European Union (EU) were women, and on average there are four times more men than women in Europe with ICT-related education.

While Rwanda and Myanmar still suffer from issues of social acceptance, and many women graduates end up not pursuing a career in ICT despite their education, female-only organizations and new social movements are gradually overcoming these obstacles.

In fact, it seems that the Western world is lagging behind many emerging markets when it comes to the ascension of women in the tech world. In India, 42% of undergraduate students in computer science and engineering are women, according to 2011 statistics.

While there is still a considerable drop after graduation, approximately 30% of programmers in India are female, an average that far outdoes both the EU and the US.

The rise of Muslim women in the global workforce is also transforming STEM-related fields. Kuwait and Brunei, for instance, are two out of the five countries where women make up more than half of STEM graduates.
In Malaysia, women and men share the ICT field equally. In the UAE, ICT graduate programs are seeing a quickly rising number of women taking student positions.

Perhaps more than anywhere else, Iran stands out as a country where women have been able to equal and dominate men in STEM fields. According to author Saadia Zahidi, approximately 70% of Iranian university graduates in STEM fields as well as more than half of STEM-related jobs are held by women.

As technology continues to influence every aspect of our lives, it is refreshing to see that the gender gap in the tech field is slowly being reduced.