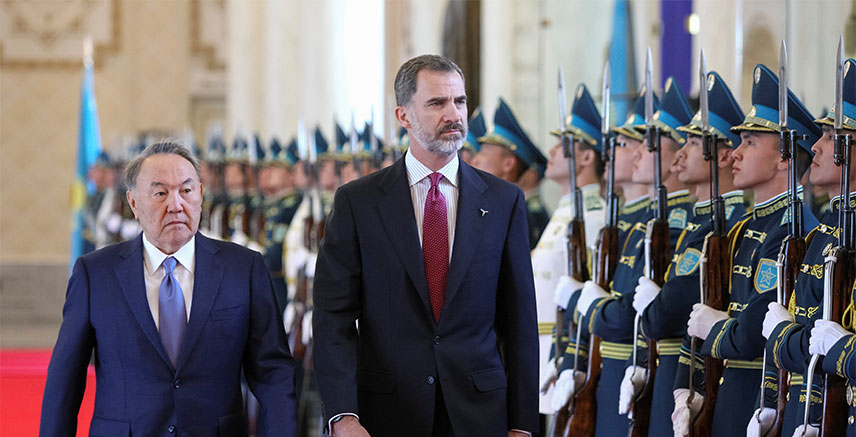 All Eyes on Astana

Kazakhstan in spotlight as Expo 2017 begins

Share on:
In 2017 the World Expo, the Eurasian Media Forum, and the annual Astana Economic Forum all put Kazakhstan in the spotlight.

The 25-year-old nation of Kazakhstan had its 15 minutes of fame in June 2017 as three international events take place in the capital Astana.

By far the biggest of these, the Expo 2017, opened to the public on June 10, and continued for three weeks more.

With its 115 exhibiting countries and 22 international organizations, Expo 2017 brought 5 million visitors to the city over the following three months.

The biggest attraction seems to have been Kazakhstan’s eight-story high spherical pavilion, charting the nation’s history via exhibitions, performances, and installations.

As the most open and business-friendly nation in Central Asia, Kazakhstan has made strides in promoting opportunities and attracting both investors and visitors to what was once one of the least developed frontier areas of the former USSR.

“Future Energy,” the theme of the Expo, could not have been more in tune with the times. As climate change debates command unprecedented attention across the globe, this oil and gas-dependent emerging economy has projected itself as a leader in renewable energy development.

Today, Kazakhstan stands as the second biggest oil and gas producer in the former Soviet Union region, behind Russia, with a daily output of up to 1.6 million bpd and the potential for rapid expansion.

In 2016, its massive Kashagan field came online after years of delays, and should see production ramping up to a plateau of 370,000 bopd in the next few years.

Operators of the Tengiz oil field decided to invest in expanding production by 260,000 bopd by 2022.

The country also holds massive coal reserves which it uses for power generation.

But despite this established primacy in the global hydrocarbons industry, Kazakhstan has become, in recent years, a champion of renewable energy sources.

Through the ratification of its progressive Green Economy law (2015) and extensive sustainable energy promotion initiatives, the country aims at reaching a 50% clean energy ratio by 2050, it also hopes to reduce Co2 emissions, related to heavy industry, by 3% per year.

At the Middle of Everything

Kazakhstan forms a crucial part of China‘s far-reaching “One Belt One Road” (OBOR) initiative, which promises to revolutionize trading routes between Asia, Europe, and Africa. Its gigantic territory, combined with access to the Caspian Sea, a long border with Russia, easy access to the Iranian and Azeribaijani markets, and huge untapped energy resources all make Kazakhstan an important consideration for the success of the Chinese project.

The lofty goals of adapting the historic “Silk Road” to the 21st century to transform land and sea trade between Asia and Europe may seem unrealistic to critics.

But the Asian Development Bank has already poured USD3.4 billion in loans, grants, and technical assistance to Kazakhstan in recent years. The Chinese-backed and recently created Asian Infrastructure Investment Bank will likely follow suit, showing that China’s putting its money where its mouth is.

The Astana Economic Forum also took place in the same month, from June 15-16.

It brought together almost 4,000 experts and analysts to debate prospects for development in the country. The forum’s theme was coordinated in advance with that of the Expo, providing the opportunity for attendees from both to explore the “New Energy — New Economy” concept.

Later in the month, the Eurasian Media Forum, from June 22-24, saw experts gathering to debate regional interaction and integration, security concerns, and country branding, a topic to which Kazakhstan has paid a lot of attention in recent years.

Kazakhstan is not hiding its intentions.

Kazakhstan wants to be relevant in the region and in the wider world, and it knows who it wants to lure. For now, references like the World Bank’s Ease of Doing Business index, which noted a six-position climb for Kazakhstan this year to 35th place, seem to validate the image Kazakhstan is presenting to the world.

But did the 5 million visitors agree?