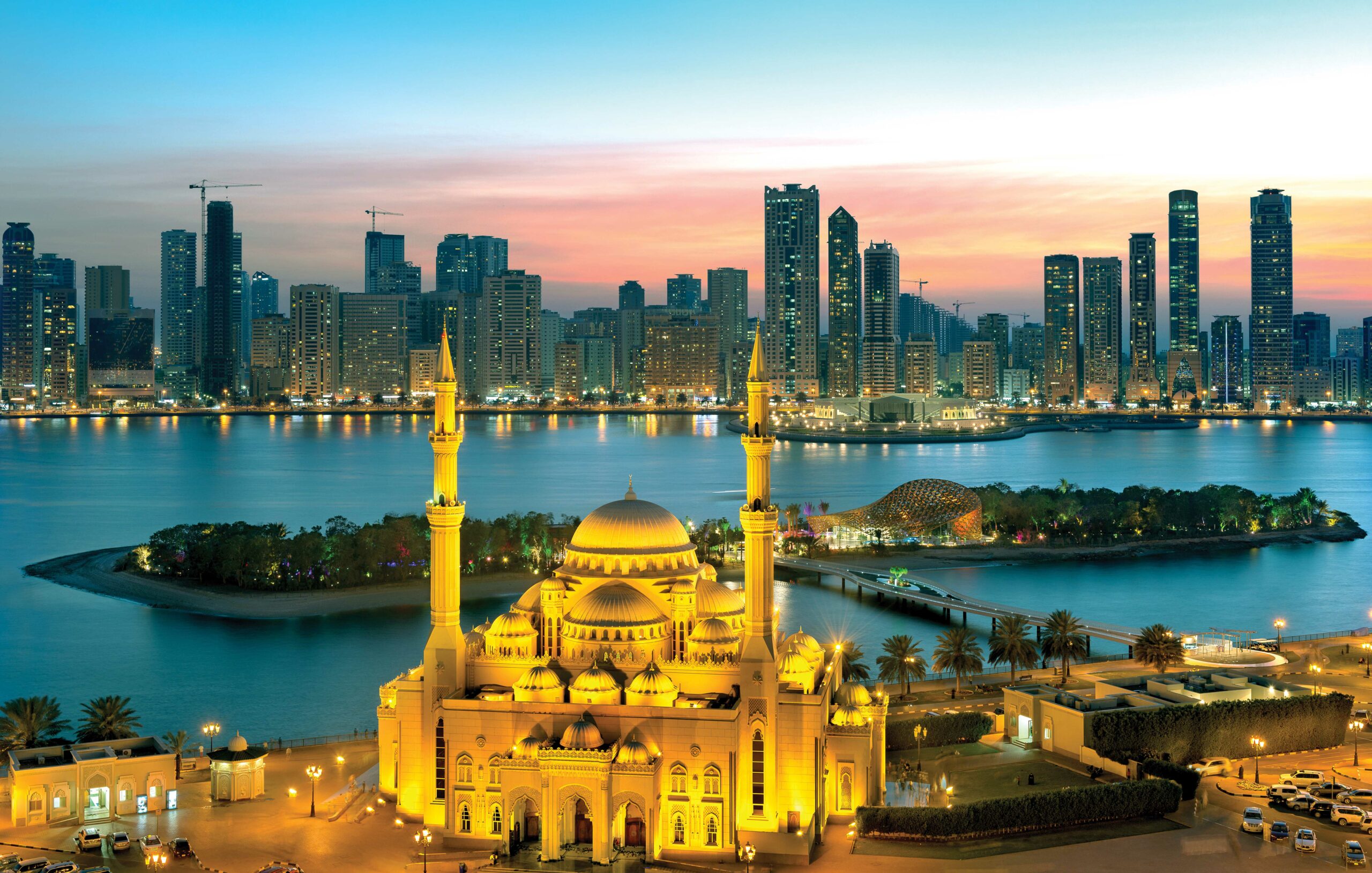 Share on:
Though regional uncertainty has led to strained diplomatic relations on the Arabian Peninsula, Sharjah has been growing into a role as a global leader thanks to its identity as a hub for culture and industry.

The third-largest of the UAE’s emirates has found itself in the unusual position of having stronger and more stable ties abroad than its immediate neighbors, thanks to a host of bilateral trade and investment agreements that have bolstered its industrial sector. In the Arabian Peninsula, however, Sharjah has had to deal with fractious relationships between key partners, with the diplomatic rift between Qatar and the UAE the foremost example. As Sharjah moves into the future, the focus will be on strengthening these regional ties while maintaining the international partnerships crucial to its dreams of industrial and cultural economic expansion.

No stranger to regional disputes, 2017 brought Sharjah a set of circumstances that stood out as noteworthy even for the region. In early June 2017, Saudi Arabia, the UAE, Egypt, and Bahrain cut diplomatic and economic ties with Qatar, citing its support of terrorism and unwillingness to work with its Gulf neighbors. The dispute resulted in the immediate closure of land, air, and sea border between the two groups and the expulsion of Qatari nationals from the participating countries.

While the decision was made by the UAE as a whole, Sharjah is impacted in a number of ways. The Emirate’s foremost advantages, industry and cultural tourism, are bolstered by a unified region. Sharjah’s industrial growth has been fueled by free zones that have become hubs for regional and industrial investment; drawn by the Emirate’s welcoming regulation and strong infrastructure, regional and international firms have been flocking to the Hamriyah Free Zone and the Sharjah Airport International Free Zone and enjoying the increased efficiency and economies of scale that these sites have to offer. Still, Sharjah’s importance to the UAE’s industrial and transport sectors have created new opportunities even within the uncertainty. In June 2017, Sharjah signed an agreement with German energy firm Uniper Global Commodities to make Hamriyah Port a new LNG terminal. Hamriyah was chosen because it was the only location in the Northern Emirates with the infrastructure to handle gas imports. With the first deliveries expected to be completed in 2019, the site is a landmark for the UAE, strengthening Sharjah’s position as a stable hub for industry.

Likewise, Sharjah’s tourism industry benefits greatly from a united Arab world. Named the Cultural Capital of the Arab World by UNESCO in 1998, the Emirate saw tourism increase by 16% in 2017 in part due to the government’s investment in promotion across the region. The GCC makes up the single-largest bloc of foreign visitors to Sharjah, accounting for 22% of all visitors in 2016. The Emirate is home to 16 museums and is in the midst of a massive development project to turn the old city into a traditional multi-use market, an endeavor that is expected to draw visitors from all over the world but is most appealing to the Arab market. The increased uncertainty in the region, however, threatens to disrupt the flow of regional travel. While the rift is only diplomatic in nature, the potential for economic disruption in the participating countries could lead to lower visitors. Saudi Arabia, for example, sent more than 160,000 visitors to Sharjah in 2016, and internal travel within the UAE accounted for around 216,000 additional guests; any significant changes to economic health of these two countries would be felt throughout the industry.

A continued look at Sharjah’s tourism flows shows the success of the Emirate’s diplomatic efforts in further-flung regions. Asia and Europe combined to account for 40% of all foreign visitors to Sharjah in 2016, a marked increase over recent years. The growth of the Asian market, in particular, reflects the principles that have helped Sharjah become one of the region’s model economies. Aggressive marketing from both the government and the private sector has raised the Emirate’s profile in the Chinese market. The Emirate’s strategy has involved active participation in Chinese trade and investment and new services targeting Chinese consumers, and returns have been overwhelmingly positive for both parties. According to UAE state figures, there are more than 4,200 Chinese companies operating in the country today, and bilateral trade was estimated at USD60 billion in 2016. And these flows show no sign of abating; 2017 has seen Sharjah only continue to increase these diplomatic ties, with members of the government’s FDI office participating in the May 2017 World Forum for Foreign Development and the Chinese Offshore Summit, held in Shanghai and Shenzhen, respectively. The UAE also participated in China’s Belt and Road Forum, which discussed the Chinese government’s landmark plan to link developing Asian economies.

The UAE’s position as a key transport point for Asia and the Middle East has also given it an increased prominence on an international scale. In March 2017 Sharjah hosted the sixth International Government Communication Forum, (IGCF), a global gathering dedicated to building platforms for better governorship. First begun in 2012, the IGCF has become Sharjah’s annual opportunity to take a leadership role on the global stage, hosting members of the global community in order to establish knowledge transfers to improve the health of the Emirate. 2017’s conference was focused on the theme of “Societal Participation and Comprehensive Development” and featured a number of panels and dialog centered around meeting the United Nations’ sustainable development goals in the GCC. More than 2,500 guests watched officials from 17 countries discuss the steps needed to meet Sharjah’s 2030 goals. The conference saw the Emirate take a leadership role in discussions on sustainable development. As the Sharjah government’s primary international cooperation arm, the Department of Government Relations is at the forefront of events like the IGCF. The department’s Executive Chairman, Sheikh Fahim bin Sultan Qasimi, sees events like these as central to Sharjah’s overall mission of improving the quality of life of its citizens through continued economic growth. “The Department of Government Relations became a strategic partner at the event to ensure that our international partners can engage with and learn from Sharjah’s expertise,” Qasimi told TBY. “As the center of culture, education, and innovation in the UAE, the Emirate’s international reach spans the globe.”

The international community has reacted positively to Sharjah’s new efforts at outreach and dialog. “I am very impressed by the government communication system in Sharjah, how it holds discussions, collects and analyzes new information, evaluates different ideas, and then informs citizens,” former German President Horst Köhler told TBY. The success of Sharjah’s efforts can be seen in its improved relationships with previously underutilized zones such as Europe and Latin America. Cultural and economic exchange with Latin America, for example, has increased in recent years thanks to a concerted effort to expand the Emirate’s ties to the Spanish-speaking world.

On the surface, these might seem like purely superficial events, but Sharjah has demonstrated that it knows how to turn these cultural connections into concrete economic improvement. The Emirate is currently constructing Sharjah Publishing City, the first free trade zone specifically constructed with the publishing industry in mind. Originally conceived in 2015, the site is expected to hold 350 offices over 20,000sqm, becoming the largest book distribution center in the Middle East. By creating a site where Western publishers can gain new access to the Middle East and Western market, Sharjah expects to position itself at the center of a new cultural and economic space. Projects like these are essential to Sharjah’s economic future as the cultural center of the Emirates, and they can be directly traced to the Emirate’s emphasis on globalized connections and international diplomacy. “Our visibility is supported by our unique role in culture, education, and innovation in the region,” Qasimi told TBY, and thanks to the continued work of Sharjah’s leaders, that looks to remain the case for the foreseeable future.