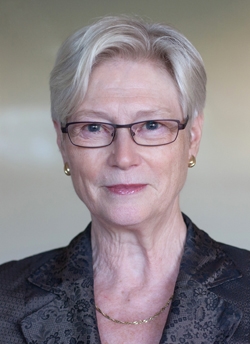 A Barrel or Two

Maria van der Hoeven has served as Executive Director of the International Energy Agency (IEA) since September 2011. She has steered the IEA during a period of exceptional change in the global energy landscape, and is taking the initiative to address the challenges of global energy governance. Her priorities include building and formalising cooperation with the major emerging energy players of the 21st century, and also expanding energy access. She was formerly Minister of Economic Affairs of the Netherlands.

Your role as Executive Director of the International Energy Agency (IEA) is to steer the world toward a more secure, sustainable energy future. What role does Abu Dhabi play in the global energy landscape?

Abu Dhabi is of course a major producer and exporter of crude oil, and the UAE plays a very important role in OPEC. In recent years UAE production has been pushed up close to 3 million barrels per day (bbl/d) to help compensate for some of the recent disruptions in supply. This has allowed prices to remain relatively stable. Abu Dhabi is also very active in the gas trade. LNG has been exported to Japan for nearly 40 years, while Abu Dhabi and Dubai have been importing surplus gas from Qatar since 2004, and transiting part of that supply to Oman. So Abu Dhabi sees all sides of the trade in gas. Longer term, the extensive use of renewable energies will also contribute to energy security, in the Gulf area as everywhere else. There is great scope for solar power in the region, as Abu Dhabi’s pioneering solar thermal plant, Shams I, has recently demonstrated.

According to the IEA’s World Energy Outlook 2014, meeting long-term oil demand growth toward 2020 depends increasingly on the Middle East. As Abu Dhabi is ranked among the top five exporters of crude oil, how do you expect the Emirate to contribute to future oil supply?

In fact, our outlooks since 2012 have highlighted the fact that, despite the recent rapid development of oil and gas production in places like the US, Brazil, and Canada, in the longer term, and we are speaking here about the period from 2020 onward, the world indeed seems likely to be drawing more and more on supplies from the Middle East region. In our central scenario we see global demand rising to about 101 million bbl/d by 2035 (from 89 million bbl/d today), with about 6 million bbl/d of that additional supply coming from the Middle East. Abu Dhabi is certainly investing heavily to be able to provide some of that. Both on and off-shore and in the gas sector you are working with international partners to pioneer some ambitious new production systems. As we point out in our recent study of investment, these projects mean sustaining a high level of investment over many years. This is an area where we have come to have confidence in Abu Dhabi’s long-term approach.

As the Abu Dhabi National Oil Company (ADNOC) works to increase natural gas production via the development of sour gas reserves and carbon-dioxide injection technology, how do you see Abu Dhabi’s natural gas influence reaching beyond the borders of the UAE?

Abu Dhabi certainly seems well integrated into the global gas market, as an exporter, an importer, and a transit country. Gas is becoming a popular fuel; it is relatively clean and quite widely available. But once Abu Dhabi’s associated gas is spoken for and the easily available non-associated gas begins to decline, developing more challenging reserves gets expensive. It is important to find ways to make the projects more attractive through offsetting benefits. Wet gas-fields deliver NGLs and condensates; a sour gas field can deliver quantities of sulphur for export (and I think Abu Dhabi is building a special railway to transport this); and with CO2 injection you can enhance production while disposing of unwanted green house gases. Our team working on carbon capture and storage have been very interested in the technical and legal challenges of this approach. This is an area where international collaboration yields real dividends; and, as for solar power, successful projects will tell their own story.

Part of Abu Dhabi’s investment strategy toward energy diversification includes four nuclear power plants, which are intended to allow the city to be 25% powered by nuclear energy by 2020—the year when all four plants will come online. What is your take on Abu Dhabi’s nuclear ambitions as countries such as Germany, Belgium, and Switzerland phase out of nuclear?

Every country has a sovereign right to decide on the role of nuclear power in its energy mix. Nuclear is one of the world’s largest sources of low-carbon energy, and as such, has made and should continue to make an important contribution to energy security and sustainability. The IEA’s World Energy Outlook has examined the effect of low nuclear investment in detail. The analysis has shown that low nuclear investment is likely to lead to higher demand for gas and coal, higher electricity prices, increased import dependency on fossil fuels and electricity, and a more difficult path to decarbonisation, although such a trend could also open up new opportunities for renewable energy sources. Such a scenario would therefore make it much more difficult for the world to meet the 2 °C climate stabilisation goal, and have potentially negative impacts on energy security.

With the International Renewable Energy Agency (IRENA), the first intergovernmental organization located in the Middle East, headquartered in Abu Dhabi, the UAE is recognized as the region’s renewable energy pioneer. How is Abu Dhabi’s diversification toward renewables contributing to accelerating the pace of renewable energy adoption worldwide?

Abu Dhabi’s offer to host IRENA in 2009 was both imaginative and generous. Since then the organisation has become very well settled. Many of our staff at the IEA have gone to work at IRENA and we are proud of this informal collaboration. We also work together with IRENA on a more formal basis, in particular maintaining jointly a worldwide data base of renewable energy policies and projects. The power of example counts for a lot in promoting new technologies, and Abu Dhabi’s pioneering work, particularly through Madsar City and the Masdar Institute, has been most impressive. The fact that Abu Dhabi with so much oil and gas reserves is also developing solar power sends a very strong message.

In light of the upcoming 2015 United Nations Framework Convention on Climate Change (UNFCCC) conference in Paris, where a global, binding climate agreement will be signed, what is your assessment of the efforts the UAE is making to address the global climate agenda?

Climate change is a global challenge that requires a global response, and an international climate agreement to be negotiated by COP21 in Paris 2015 will be critical in defining this response at the global level. We recognize the UAE’s efforts in driving political and public momentum in this regard, specifically with respect to its organization of the Abu Dhabi Ascent, organized this year preceding the Climate Leaders’ Summit in New York City. This was a successful meeting in engaging political leaders on the global climate change agenda, a momentum that we hope to continue onto Paris next year.

Having a truly global view of the world’s energy system, how would you characterize the energy policies in Abu Dhabi in relation to the wider global energy economy?

Sir Winston Churchill once observed that the only real security comes from diversity of supply. IEA members’ overall objective is to maintain energy supplies that are affordable, sustainable, and secure. Abu Dhabi, which has developed a wide range of oil and gas production and is now advancing in the direction of solar power and nuclear, has certainly moved firmly to diversify its energy regime. These developments should enhance both security of supply and environmental sustainability, and act as an example for others. I would only add that we should not forget the “hidden fuel,” which is energy efficiency. I remember Dr Sultan Jaber once commenting that the cheapest kilowatt is the one you do not use. In fact, global progess in energy productivity has been accelerating. A recent study has shown that in 11 IEA countries over the long term, savings from energy efficiency were greater than the output of any single fuel source. The hidden fuel has become the “first fuel.” In countries where fuel is plentiful (and sometimes very cheap), there are huge gains still to be made. I know that the Masdar Institute has this firmly on its radar and I am sure we will see significant progress in Abu Dhabi and in the Gulf area in the next few years.