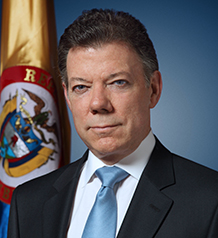 Juan Manuel Santos graduated from the Naval School of Cartagena in 1969 and continued in the Colombian Navy, obtaining a Bachelor’s degree and graduating as a Naval Cadet. After leaving the Navy, he attended the University of Kansas, graduating in 1973 with a bachelor’s degree in economics and business administration and went on to receive an MSc in economic development from the London School of Economics and another in law and diplomacy from the Fletcher School of Law and Diplomacy at Tufts University. He has worked as Chief Executive of the Colombian Coffee Delegation to the International Coffee Organization and Sub-Director of his family-owned newspaper, El Tiempo. Under President César Gaviria he acted as Minister of Foreign Trade. In 2006 he became Minister of Defense, before being elected President in June 2010.

Share on:
President Juan Manuel Santos on the new progressive changes that Congress has enacted to propel Colombia to the future.

For over half a century we have not been a normal country. For over half a century we have suffered the burden of an armed internal conflict that gave us the stigma of being a “different” country in the continent. While others overcame dictatorships and difficult periods of violence, we were still tangled in a confrontation with the largest and oldest guerrilla group in the hemisphere, as though the end of the Cold War had not happened on our soil.

We had to rid ourselves of this burden. We had to rid ourselves of this obstacle on the path of our development and social progress. We had to finally be part of the third millennium. Today, after more than three decades of attempts by the different governments that have led the nation, we are achieving that walking hand-in-hand with congressmen and all Colombians. I do not only refer to the legislative initiatives that have eased the development of the peace process and ensure the proper implementation of the agreements.

Peace—as we well know—is much more than the end of the armed conflict with the guerrillas. Peace also requires reforms to ensure greater development, equality, and coexistence in our nation and together we have made these reforms, not only since 2014, but since 2010, when many supported initiatives of enormous significance.

History will examine the work of the Congress in these two periods, and I do not doubt that it will show that this Congress produced the most progressive initiatives of its time and that it worked more than any parliament before to further guarantee the rights of Colombians. In the last six legislatures, Congress and the government had to risk it all to shape an agenda that is changing for the better the lives of our compatriots and for the victims, who finally have law and institutions that safeguard their rights, and to work to repair and return the seized lands. For regions, which have improved their management capacity and equality of their income through reforms such as the law of land management and for the strength of our economy through an innovative legislation, such as constitutional reform and the laws that impose fiscal discipline, ensuring healthy finances and resources to the most vulnerable Colombians. For employment, creating norms such as Ley del Primer Empleo (the First Employment Act), reducing payroll contributions, and in this last parliamentary term, Ley del Empleo Juvenil (the Youth Employment Law).

As for the poor, to continue furthering poverty reduction—as we have accomplished in recent years more than any other period in our history—with initiatives such as the Ley de Vivienda Social (the Social Housing Act) or a law that turned the program Más Familias en Acción (More Families in Action) into state policy. As for our health, we passed laws that improved financing for hospitals, as well as a statutory law that enshrines health as a fundamental right and even became the first social right in the history of our Constitution. As for our children and our youth, education has been the sector with the most resources allocated in the last two budgets through programs such as Todos a Aprender (Everyone to Learn), Ser Pilo Paga (It is Worth Being Smart), bilingualism, and Jornada Unica (The Single Day), as well as building more schools than ever before.

I have to highlight and thank the law passed this year by Congress that turns the Estrategia Integral por la Primera Infancia de Cero a Siempre (Comprehensive Strategy for Early Childhood from Zero to Forever) into state policy. This is a crusade that we began at the start of this government to guarantee that children under the age of five and pregnant mothers will receive the proper attention, because we know they are the best investment for the future. With that law, Congress has sown the seeds of the biggest transformation in Colombia, which is what happens from the first phases of life. I want to thank the congressmen for achieving that milestone.

I also want to highlight and recognize—before the country—the commitment shown by my wife Maria Clemencia to this special program, who has been its prime mover.

And for who else have Congress and the government worked? We have worked for our land, with initiatives such as the Ley de Financiamiento Rural (Rural Finance Act) and authorizing the creation of the Zonas de Interes de Desarrollo Rural, Economico y Social (Rural Areas of Economic and Social Development Interest), known as Zidres, to promote investment and productive projects in the most untapped areas of the country. We have also worked to strengthen the judiciary system, with new legal codes in administrative, general process, and penitentiary and the creation of the Statute of Arbitration; removing the economic incentive of popular actions; Ley de Arancel Judicial (the Judicial Tariff Act), which expanded the sources for funding of the judiciary system, and, of course, the Reforma de Equilibrio de Poderes (the Balance of Power Reform).
Even with those parts of the reform that cannot be applied—for recent rulings of the Constitutional Court—we must highlight its importance, beginning with the elimination of the figure of the reelection not only of the president but of all the high dignitaries of the state. Colombia is henceforth moving toward a more flexible and participatory democracy, which also guarantees generational change.

I would also like to highlight the new Police Code approved by Congress that updates a regulation that is more than 40 years old, and which gives greater and more effective tools to the police to protect the security and tranquility of citizens. We have also done something extremely important, which is to produce an advanced legislation that protects the rights of minorities, including the excluded, and responds to the realities and needs of today.

There are new norms such as a law against discrimination, a law for people with disabilities, a law for victims of sexual violence, a femicide law, and a law governing the use and production of marijuana for medical uses. There are also laws that improved the working conditions of workers and domestic workers, community mothers, volunteers, firefighters—who went from an annual investment of COP800 million to COP30 billion—and the Ley de Proteccion al Cesante.

All those new laws represent particular achievements in ensuring social rights of Colombians, and I reaffirm the conviction that the agenda we have accomplished in the last six years is a historic leap for the country.
All these mean that the major reforms that transform Colombia, progressive and advanced reforms, are being done from republican and democratic institutions, and not from weapons, not from a revolution, not from authoritarianism. Be proud that you are part of this change that will lead to a new Colombia; a Colombia with much more equity, more progress, more education, and, as we always dreamed, a Colombia in peace.