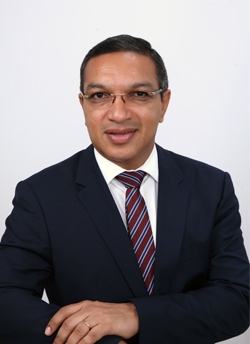 A Finger in Every Pie

Salimo Amad Abdula has been a vocal advocate for the Mozambican business sector, and the private sector role in the economy. He contributed to the development and institutional set up of the National Commercial Association of Mozambique (ACM) and the Confederation of Mozambican Business Associations (CTA). He has been active in government as a National Deputy to the National Assembly. As a member of Parliament, he has been instrumental in liaising with parliament and the private sector. He is the Chairman of the Board of Directors of INTELEC Holdings, a group of Energy, Services, Publicity, Civil Construction, Tourism Telecommunication and Finance Service Companies, and of Vodacom Mozambique. Abdula is cyrrently the Chairman of CE-CPLP. He was named Man of the Year in 2014 by Soico group and in 2013 was honored with a distinguished award of leadership given by World Finance Magazine.

Share on:
"Intelec Holding’s focus is on creating and exploring local opportunities."

What are the main investments and development projects for Intelec in the field of telecommunications and energy?

Intelec is a shareholder of Vodacom Moçambique, and I am chairman of the company. Intelec is the major component in our overall involvement in telecommunications. Yet we also invest in other telecommunications services companies, such as Questcom, which is the principle company for service solutions. In terms of energy, I launched Eletrosul, an engineering service for both public and private companies, back in 1990. Having identified key partners, we opened a cable manufacturing company in Mozambique. Eletrotec is now one of the main private companies providing major engineering services, such as the building of grids and power stations. We were the fastest growing company to have emerged from public tender in the 1998 to 1999 period through the World Bank and the government of Mozambique in the generation and management of natural gas. Our focus has always remained on being the key private sector company for power generation. We have contributed to the country; however, other players have also begun to establish their businesses here. The market is becoming competitive for us, which is essentially positive, and we are pleased with our contribution to national growth and employment.

What would you say are the main agribusiness ventures of Intelec Holdings?

Intelec Holding’s focus is on creating and exploring local opportunities. Agriculture was not our main focus at the outset; however, we recognized that the country has high-quality land and a good water supply, as well as the required non-skilled manpower. We found excellent land and began growing soybeans and rice, which is now one of the most successful projects in the north, and moreover, a model for agriculture in the rest of the country. Together with our partners, we employ approximately 2,000 people. Our focus in the future will be on agricultural production and exports to Japan and wider Asia. There is currently considerable demand in the country, however, whereby all of our production goes to the local market.

“Intelec Holding’s focus is on creating and exploring local opportunities.”

What is the status of your mining concession and how would you describe the industry in Mozambique?

The mining sector increasingly revolves around multinationals. We won one of the five concessions that we had bid for, and then began looking for a strategic and technological partner in coal mining. We have already begun talks with a few agencies and potential partners about a joint effort to start exploring coal-mining prospects.

What near-term priorities have you set for Intelec Holding?

We will sell a number of firms, while we rebuild and amalgamate others to allow us to focus on areas such as energy and telecommunications and explore new business opportunities. We are looking at real estate, agriculture, and infrastructure, which is our main direction.

How would you describe the role of the company in the socioeconomic development of the country?

As a businessman my focus was always to leave a legacy and build the country. Intelec is important in Mozambique not only as one of the largest companies, but also because we have directly created over 2,500 jobs in Mozambique, while over the coming year several thousand new jobs will be created, thereby increasing our contribution to the broader economy and society. With three partners, we recently re-opened the largest textile manufacturer that had been closed for over 20 years. We have agreements to export to the US and are set to create over 750 direct jobs and indirectly support over 150 SMEs working with the factory. These will be anchored by our manufacturing operations and will create over 7,500 jobs with other small companies.

Why should an investor select Mozambique as opposed to other countries in the region?

Everything is available here for investors from infrastructure to fast-paced education and a good road system. We also have manpower; hence, if a company brings technology and training it can maximize its use of Mozambican workers. We also have fertile lands and water, as well as a strategic location on the western shore of the Indian Ocean. Mozambique has been growing for the past 15 years at a rate of 7% to 8% per annum, which clearly demonstrates a stable economy. Meanwhile, our strong democratic institutions are also an incentive to long-term investors.

What is your vision for the future of Intelec Holdings?

As a major corporation, it is our duty to uphold the highest standards across all of our operations. Many companies are better capitalized than our own; however, they perhaps lack the same credibility and reputation that we enjoy. We want to be credible and to create a lasting connection and reputation with the business world and civil society. I hope that Mozambique can develop a more diversified economy. I do not believe in developing within an already established major industry, such as oil and gas, which is why we have focused on industry, agriculture, and value-added projects. We are also involved in water and waste treatment, working with smaller companies in this field. The oil and gas segment should add value to the processes of economic diversification, and will offer Intelec Holdings strong opportunities for sustained growth, in turn creating a sustainable corporation that will contribute to employment, while adding value to the country.