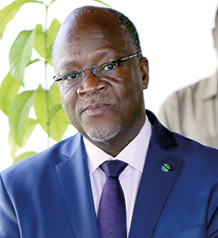 John Magufuli has been the President of Tanzania since 2015. Magufuli earned his BaSc in education, majoring in chemistry and mathematics from the University of Dar es Salaam, where he also earned his master’s and doctorate degrees in chemistry in 1994 and 2009, respectively. He was first elected as a member of parliament in 1995, and served in the cabinet as Deputy Minister of Words from 1995 to 2000, Minister of Works from 2000 to 2006, and as Minister of Works for a second time from 2010 to 2015. He stood as the candidate for the ruling CCM and was sworn in on November 5, 2016.

Share on:
TBY talks to John Magufuli, President of Tanzania, on the shape of reform and strategies for growth.

What are you priorities for the years ahead?

In government, I plan to reduce bureaucracy in order to accelerate the implementation of government decisions and projects; impose austerity to reduce expenditures that can be avoided; and restore discipline to government and public service to increase transparency and accountability. In order to implement this we will reduce the size of the cabinet, increase supervision in the collection of taxes to plug tax evasion. We will ensure that those who are supposed to pay taxes pay accordingly. We will increase discipline in government expenditure to ensure that money that is saved goes to development projects. We will administer the laws, regulations and procedures of accountability to leaders and public servants. We will continue to identify and control other areas of unnecessary spending that cost the government a lot of money such as consultants, foreign trips, seminars and workshops, buying foreign goods, and other wasteful things.

What key investments is your administration planning to spur economic growth in Tanzania?

Our country’s economy has been improving and growing an average of 7%, due to the efforts of previous governments to build infrastructure such as roads, ports, railways, telecommunications, and electricity generation and distribution. We will carry forward the construction of new infrastructure, and will attract investors both domestic and foreign. We will build roads linking our cities and district capitals of provinces, in key areas of strategic and economic access, and expansion of roads in cities like Dar es Salaam, which is key because the port is the business gateway to ours and neighboring countries. Over the next five years we plan to build a number of railway lines up to international standards, including Dar es Salaam to Mwanza, from Western Tanzania to Burundi and Kigali, as well as lines in the north and south of Tanzania. Additionally, our country is well endowed with minerals and natural resources. The discovery of natural gas has increased the hopes of many of our people regarding our economic potential in the coming years. The government will ensure that our natural resources are used for the benefit of the nation.

What will be your approach to the private sector and to FDI?

The private sector is responsible for generating huge economic growth. We have no other way if we really want to build the foundation of a sustainable economy in our country. Tanzania’s Development Vision 2025 requires us to build the country’s middle-class and to start, we will ensure that existing industries work. Under previous governments the nation privatized assets and the monitoring and supervision of the agreements under which this process occurred was weak, and these industries weakened. I promised that those who obtained the privatized industries would restart production and should start immediately. If they fail then we will take the industries in accordance with the laws and regulations of the country and give them to people who are ready to develop them. We will encourage investors to come to our country. The infrastructure to do this already exists and over time will improve. We will also strive to eliminate distractions and bureaucracy of this kind and try to convince domestic and foreign investors to increase industries in the country. We will no longer tolerate government officials who hinder efforts at investment and construction industries in the country.

What sectors are most important to achieving economic goals?

We would like to grow industries that use raw materials from Tanzania, particularly from agriculture, livestock, fishing, and mining. Manufacturing of this type will provide us with the opportunity to create a production system. Additionally, industries producing goods for mass consumption such as clothing, shoes, and cooking oil will be assured on the local market before considering the export market. That will also add to our reserves of foreign currency and enable us to implement and develop other initiatives for the welfare of our economy. The third industrial feature we are aiming for is generating more jobs. Our objective is that by 2020 the number of jobs resulting from industry reaches 40% of all employment.