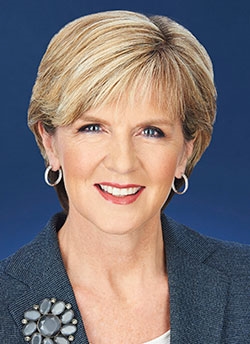 A Friend In Deed

Julie Bishop is the Minister for Foreign Affairs in Australia’s Federal Coalition Government. She is also the Deputy Leader of the Liberal Party and has served as the Member for Curtin in the House of Representatives since 1998. She was sworn in as Australia’s first female Foreign Minister on September 18, 2013 following four years in the role of Shadow Minister for Foreign Affairs and Trade. She previously served as a Cabinet Minister in the Howard Government as Minister for Education, Science and Training and as the Minister Assisting the Prime Minister for Women’s Issues. Earlier, Minister Bishop was Minister for Ageing. She has also served on a number of parliamentary and policy committees including as Chair of the Joint Standing Committee on Treaties. Before entering Parliament she was a commercial litigation lawyer at Perth firm Clayton Utz, becoming a partner in 1985, and managing partner in 1994.

Share on:
"Australia has a warm relationship with Lebanon, based on strong ties between our two peoples."

In what areas are Australia and Lebanon currently cooperating and what is your outlook for the future of the relations between the two countries?

Australia has a warm relationship with Lebanon, based on strong ties between our two peoples. Lebanese migrants have enriched Australia’s society with their enterprise, civic spirit, and vibrant culture. Today, Lebanon faces grave challenges, as it hosts an enormous population of refugees and is faced with rising extremism in the region. I welcome the generosity and fortitude demonstrated by the Lebanese people at this time. Australia stands by Lebanon and is a committed supporter of its sovereignty and prosperity. Countering the threat of terrorist groups such as ISIS is a priority for countries around the world, including both Australia and Lebanon. Our main areas of cooperation with Lebanon currently include defense, law enforcement, and counter-terrorism. Australia and Lebanon are both members of the international anti-Da’esh coalition. Australia offers a number of places on Australia-based joint training courses to selected members of the Lebanese Armed Forces. Australia has also participated in the UN Truce Supervision Organisation (UNTSO) since 1956, in Israel, Egypt, Syria, Jordan, and Lebanon. The Council of Australian-Arab Relations has supported cultural exchanges between Australia and Lebanon. In 2014 the Council supported the Adelaide Festival to feature the work of Beirut-based artists and filmmakers Joana Hadjithomas and Khalil Joreige. Our relationship with Lebanon is strong, but I believe there is scope to do more, including boosting trade and investment. A number of Australian companies are considering the potential of investing in Lebanon’s oil and gas sector.

What were the main highlights of your visit to Lebanon last year?

I visited Lebanon as Australia’s Foreign Minister in April 2014. During my visit, I had a highly productive discussion with HE Gebran Bassil, Lebanon’s Minister for Foreign Affairs and Emigrants, on the strategic challenges we face in the Middle East. I highlighted Australia’s strong and continuing support for Lebanon as it addresses the challenges caused by the continuing humanitarian crisis in Syria. The conflicts in the Middle East today are the worst we have seen in many years, and during my visit I had the opportunity to see firsthand the effect on Lebanon. I met with asylum seekers, UNHCR, and UNICEF representatives at a processing camp to discuss Australian support for those affected by the Syrian crisis. At the time, I also welcomed the formation of a Lebanese government, which was a crucial step for stability. Lebanon needs strong and united leadership and Australia encourages Lebanon’s politicians to work together toward this end.

“Australia has a warm relationship with Lebanon, based on strong ties between our two peoples.”

What support has Australia provided to help combat the Syria crisis?

The conflict in Syria is the biggest humanitarian, peace, and security crisis facing the world today. Syria urgently needs a political solution to the conflict that can end the violence. Australia will continue to urge all parties to agree on an inclusive process, as outlined in the Geneva Communiqué, which allows the Syrian people to determine their country’s future. Australia’s response to the Syria crisis is one of our largest to a humanitarian emergency. Since 2011, the Australian government has provided $155.8 million in humanitarian assistance to help vulnerable people in Syria and its neighboring countries. More than half has been allocated to the regional response to assist Syrian refugees and their host communities, including $30.6 million earmarked specifically for Lebanon. Our assistance has delivered food, water, shelter, protection, health services, and education to communities in need. Australia recently announced a further $20 million in humanitarian assistance at the third international pledging conference for Syria hosted by the United Nations and the Government of Kuwait. This includes support for the World Food Programme and the International Committee of the Red Cross in Syria, as well as UNHCR and Australian non-government organizations in Lebanon.