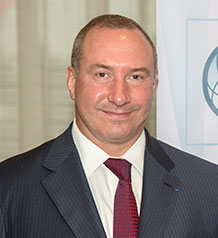 Frédéric Garcia has a master’s in international project management from the École Supérieure de Commerce de Paris, as well as an engineering degree from the École Nationale Supérieure d’Arts et Métiers. He is the CEO of Airbus Group for Mexico. From 2007-2014, he was CEO of Airbus Defense and Space Mexico. He has held titles such as General Manager of ITA (Inversiones y Técnicas Aeroportuarias), Marketing Director of ASUR, and, from 1992-1999, Business Development Manager in GTM (Grand Travaux de Marseille).

Share on:
TBY talks to Frédéric Garcí­a, President of Consejo Ejecutivo de Empresas Globales (CEEG), on investment in the country, developing competitiveness, and goals for the future.

How would you define CEEG’s role in the Mexican economy?

CEEG was created in 2004 and now represents 47 CEOs of companies that are in Mexico’s aeronautics, agribusiness and biotechnology, food and beverages, electronics, automotive, transport, banking and finance, consultancy and outsourcing, energy, pharmaceutical and healthcare, industrial estate, infrastructure, building materials, chemicals, insurance, steel and mining, information technology, telecommunications, and retail sales sectors. Our aim is to contribute to the development of business in Mexico, and to make the country more competitive within the global economy. Our aim is to convince corporations of the benefits of investing in Mexico and be strong partners for investing in the economy. In 2012, CEEG published an agenda on the competitiveness of the country, with more than 100 recommended changes that would make Mexico more competitive. This has had a direct impact on improving the business and policy landscape of the country, because we saw subsequently that part of the reforms that the government undertook were based on some of our recommendations. The public authorities recognize us as an entity that supports and helps create public policies that are geared toward furthering the Mexican economy. We represent about 2 million jobs and 10% of the GDP of the country. We have a broad and direct impact and view of what happens in Mexico.

What are the biggest challenges still facing Mexico in terms of competitiveness?

To move forward with these global targets as a country, we need to have a global view on where we want to go. We can go far, but we need to know where we are going, what our objectives are, and show the will to attain those objectives. A clear long-term strategy is important. Second, we need a stronger state of law. Sustainable growth is impossible without the rule of law. The government’s energy reforms are expected to add 1.5% to Mexico’s GDP annually; however, the cost of security in Mexico comes to 1.6% of GDP per year. That gives an idea of how much money is spent on problems related to rule of law. Of the 18,000 complaints of impunities relating to oil theft from Pemex, only 700 complaints have been processed, which indicates a 95% impunity rate for losses suffered by Pemex. That means we need to address this crucial issue if we are going to attract investment to Mexico and ensure sustainable growth. A third priority is to be able to implement reforms. Making laws is easy, while implementing them is a tougher task. For reforms to be effective, they must be implemented permanently and sustainably. Education is another important challenge. We need the right, skilled people at all levels if Mexico is to be competitive in an increasingly technological and specialized global market in all sectors. We need to have an education system that is prepared to meet our needs in the future. The aim is to have in the global supply chain more Mexican manufacturing companies that mostly employ and are managed by Mexicans. We are working closely with the government on all of these matters, especially compliance with rule of law in Mexico.

What is CEEG’s role specifically in achieving those goals?

We have been invited by the government to work in an important organization called the Comité Nacional de Productividad (National Committee of Productivity) that includes various government ministers, heads of top universities, heads of various economic and trade organizations, top CEOs, and major labor unions. We are working with them to develop the competitiveness of the country.

What will CEEG try to achieve in the coming years?

We will work closely with the government, the private sector, and civil society so that Mexico can be among the top five procurement and production players in the global economy within 15 years.