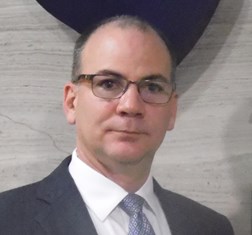 A Hub in the Making

Miguel Bolinaga is the president of the AES Panama, formed by AES Panama, AES Changuinola, Gas Natural Atlántico, and Costa Norte LNG Terminal. Bolinaga started his work in Panama in July 2013, previously holding the position of VP of External Relations and Electric Market of AES El Salvador. Before arriving in El Salvador in 2006, he was Manager of Marketing and Distribution of C.A. La Electricidad de Caracas. He had 16 years of experience in the Armed Forces of Venezuela prior to his entry into the world of the electric industry. He is a graduate of the Naval School of Venezuela with a degree in administration and logistics. He also holds the degree of systems engineer awarded by the University of the Venezuelan National Armed Forces and a master’s degree in information system development from the Simon Bolivar University in Venezuela.

2017 was an important year for AES. How do you evaluate the company’s progress?

The operations were positive in Panama. We had USD73 million in dividends, of which USD35.3 million was given to the Panamanian state. On the other hand, in 2016 we started with the construction of the first gas-fired power plant of Panama and Central America. We plan to inaugurate it in August 2018 so that it enters into full operation on September 1, 2018.
Can you elaborate on AES’ experience in the Dominican Republic?
In the Dominican Republic, we have AES Andres, which is a plant similar to the one we are building here, close to the international airport. That plant has a 160,000-cbm tank. To date, we have had over 100 natural gas discharges without any incident. We have an open terminal where ships and trucks can enter and exit for deliveries to any point in the Caribbean. A decade on, AES has positioned itself well in the Dominican Republic.

Over 50 companies from different countries have already expressed interested in receiving natural gas from Panama. What is your strategy to attract them?

These are cruise companies, industries, hotels, tourism, and power companies that use bunker or diesel and would like to convert to LNG, which is cleaner and more efficient. Cement companies that use LNG in their production process and vehicles are also interested. In the last few years, we focused on assembling the plant, though few people believed we would be able to do it on time. There have been many challenges in this project, such as the transmission line, but we must deliver by September 1. In 2017, AES agreed to enter into a joint venture with Engie Total, our gas supplier, to market and sell LNG to third parties in Central America. Since mid-2017, we have worked with business leaders and public authorities in Honduras, for example, to encourage them to build something on a smaller scale using LNG from Panama, benefitting both countries.

How do you foresee Panama becoming an energy hub in the region?

I foresee Panama becoming a hub of natural gas by distributing it to Central America and parts of the Caribbean. Our plant uses 25% of our 180,000cbm tank, and the rest can be marketed mainly to four segments. The first is power generation, and the second is bunkering LNG tankers that pass through the Canal. There are significant restrictions on environmental matters that will urge future ships to use natural gas as fuel. Third is the industrial segment, namely the refrigeration industry, food, paints, glass, vehicles, ketones, and in general any type of industry that uses boilers. These industries are migrating to natural gas because it is more efficient, cheaper, and the machinery is more durable due to the use of a cleaner fuel. Fourth is transportation; in Madrid and much of northern Europe, the US, as well as Cartagena and Medellí­n, natural gas is used for transportation. These segments may receive LNG through different systems such as trains, pipes, trucks, ships, and ISO containers. Through its LNG project, AES has opened an interesting opportunity for Panama to position itself as an LNG distribution hub and for other companies to take advantage of our LNG storage tank and terminal.

How else has AES contributed to the socio-economic development of the region?

Our project has directly injected USD1.15 billion into the economy. Regarding employment, about 87% of the 2,500 people that worked during the project’s construction peak were Panamanians, 69% of which were from Colón. Seeking to benefit local communities as much as possible, when we had a shortage of specialized welders for the LNG storage tank, we decided to make an agreement with the Colón regional branch of the Universidad Tecnológica de Panamá to train a number of young people in mechanics, electro-mechanics, electronics, and welding.

Welcome to
Welcome to WPBot
×